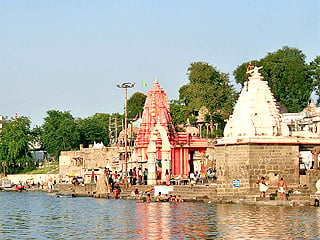 The Shipra, also known as the Kshipra, is a river in Madhya Pradesh state of central India. The river rises in the kakri bardi hills Vindhya Range north of Dhar, and flows north across the Malwa Plateau to join the Chambal River. It is one of the sacred rivers in Hinduism. There are hundreds of Hindu shrines along the banks of the river Shipra. It is a perennial river and is considered as sacred as the Ganga River by the Hindus. The word Shipra is used as a symbol of “purity” (of soul, emotions, body, etc.) or “chastity” or “clarity”. Legend has it that once Lord Shiva went begging for alms, using the skull of Lord Brahma as the begging bowl. Nowhere in the three worlds did he manage to get any alms. Ultimately, he went to Vaikunth, the abode of Lord Vishnu and asked Lord Vishnu for alms. In return, Lord Vishnu showed Lord Shiva his index finger, which enraged the latter. Lord Shiva took out his trishul and cut Lord Vishnu’s fingers. Vishnu’s fingers began to bleed profusely and the blood accumulated in Brahma’s skull and soon overflowed from it. The flow became a stream and finally a river “The Shipra”.

Religious Significance of Shipra River Ujjain is in Malwa region. The holy city of Ujjain is located on the right bank of the Shipra River. The famous Kumbha Mela takes place in the ghats of this city, once every 12 years, a yearly celebration of the river goddess Kshipra. There are hundreds of Hindu shrines along the banks of the Shipra River.

The Shipra River is one of the sacred rivers in India. It finds mention not only in ancient Hindu texts, but also in Buddhist and Jain scriptures. Every evening “Shipra Aarti”, the offering of lit oil lamps to the river takes place. This was popular with the pilgrims. Thousands of small lamps are set afloat on the river on rafts of leaves and flowers. It is believed that the north-bound Shipra takes these offerings to the abode of Lord Siva in the Himalayas.

Devotees come here with the belief that a dip in the river washes away their sins. All pilgrims take a ritual dip in the river before heading to Sabarimala. Pilgrims also perform ‘pitru tarpanam’ (offering to ancestors) before starting the trek to the shrine. People also come here to perform funeral rites for the departed souls.