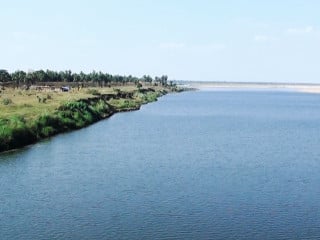 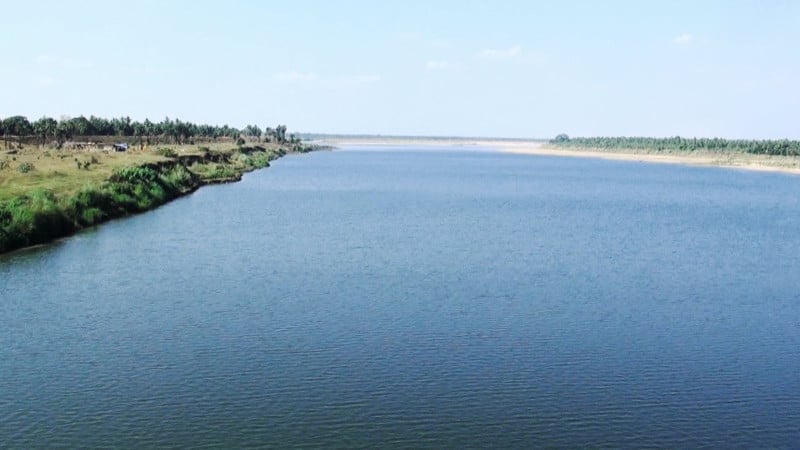 Meaning : We pray to River Godavari, the most supreme place of pilgrimage and the first among rivers. Let this Godavari give us inspiration for Dharmacharan (abiding by Dharma) [Ref: unknown]

Auspicious River Godavari is a historic and prosperous legacy of Hindu culture ! Sanatan Dharma-sanskruti developed on the banks of this auspicious River. Here, great Sages with knowledge of ‘Yadnyas’ and Sriramchandra spent 12 years of exile with Seeta. History of Godavari is a history of convergence of North Indian and South Indian culture. Many great religious leaders from ‘Aryavarta’ had stayed on the banks of Godavari; therefore, reference of such cultural union is found even in Holy Scriptures.

Gautami is none other than Ganga. She is supreme like River Saraswati. This River frees everyone from sins and bestows liberation. This river is giver of happiness and good creations. Bhagiratha uplifted thousands of Sagar’s sons through Bhagirathi. Similar benevolent work was done by Godavari with the blessings of Sage Gautam for billions of devotees in Maharashtra and Andhra Pradesh. Such is the greatness of this mother of Hindus’ pilgrimages and source of nectar. Her just ‘darshan’’ also helps in eradicating all sins. Words fail to describe the greatness of River Godavari; the eliminator of sins and troubles.

Having holy bath in River Godavari during ‘Simhastha Parva’ is 1, 00, 000 times more spiritually beneficial than having bath in Godavari at other times. Significance of this ‘Simhastha Kumbh-Mela’ which is the only one held in Southern and Western India has been described right from ‘Vedas’ to Saint Tukaram’s ‘gaathaa’. In this book, therefore, information about ‘Simhastha Mahaparva’ etc. festivals related to River Godavari, whole ritual of having holy bath in the river, and ‘vyashti’ and ‘samashti’ sadhana of Sri Godavari Devi has been explained. At present, this holy river has been polluted; so attempts to be made for its protection are also mentioned in the book. The purpose of this book is to let everyone know the greatness of holy River Godavari. Protection and nurturing of this River with devotion will be possible only when one knows the great significance of Godavari and this Ganga – Gautami – Godavari will purify all, by freeing them from curses, sins, troubles and worldly life.

It is a prayer to Gautami Ganga to let the purpose behind this book be fulfilled !

1. Origin and meaning of the word Godavari

Meaning : One, who helps in liberating ( a person) when he has bath in her, is known as Goda. The river supreme among rivers, who help (a person) in attaining Swarga, is Godavari.

Meaning : One who gave life to a cow (that died with Sage Gautam’s touch) of Sage Gautam, is Goda (Godavari) !

2. Manifestation of Godavari on Earth

2. A. Sage Gautam bringing Godavari on Earth by intense penance and

with the blessings of Lord Shiva, she becomes a ‘Mahateertha (supreme place of pilgrimage)’

During ‘Satya-Yuga’, once there was no rain on Earth for 12 continuous years. Sage Gautam, therefore, did penance for a year to acquire grace of Lord Ganesha for getting rain. With the blessings of Sri Ganesha, the calamity of famine was taken care of only for the ashram of Sage Gautam and lot of grains could be obtained. With the help of such grains, Sage Gautam could take care of Sages and Seers from various countries. Later, few spiteful Brahmins, who had taken refuge in ashram of Sage Gautam, created an illusory cow and left it in the ashram of Gautam. This cow, while eating grains/fodder in the ashram, was touched by Sage Gautam; resulting in its death. All the Brahmins saw this and accused Gautam of committing a sin of killing a cow and left his ashram as it was not right to have anything at his place. Sage Gautam did intense penance for eradication of the sin and prayed to Lord Shiva for bringing Ganga from ‘Swarga’. Accordingly, Ganga came in the ‘jata’ of Bhagavan Shiva (Note 1) when Sage Gautam prayed that let this Goddess making all people blessed, be left at ‘Brahmagiri’ so that people would get rid of their sins by having bath in her. Those staying on her bank at a distance of even one ‘Yojan’ would get liberation even without having bath in her. Bhagavan Shiva blessed Sage Gautam and sent Godavari to Earth. (Brahmapurana)

2. B. Origin of Godavari and period of her manifestation

Period of ‘Samudra-manthan’ and birth of Godavari is same.

Meaning : After completion of 2, 00, 000 years of ‘Kruta-Yuga’ when ‘Mandhat’ was the king on Earth and ShriVishnu incarnated as ‘Kurmavatar’ (Dhata naam Sanvatsari), Jupiter was in star-sign of Leo, in ‘Magh’ month, Shukla Paksha, Dashami, Monday, ‘Don prahari (12 noon)’, Godavari manifested due to prayers of Sage Gautam (On Brahmagiri Hills, Tryambakeshwar) in the roots of ‘Audumbar’ tree.

Since Godavari has manifested from ‘jata’ of Lord Shiva on Earth, she is known as Ganga. Since she manifested in southern part of India, she is also known as ‘Dakshin Ganga’.

Maharshi Gautam brought Godavari on Earth; therefore, she is called ‘Gautami’. It has been stated in ‘Brahma-purana’ that Ganga beyond the part of Vindhya Mountains (presently in southern part of India), is known as Gautami.

Bhagavan Shankar told Sage Gautam few names of Godavari as ‘Maheshwari’, ‘Vaishnavi’, Nanda, Sunanda, Kamadayini, Brahmatejasamanita and Sarvapaap-pranaashini. He has also said that among all names, He liked the name Godavari. Sage Kanva, while praising, has called her as Brahmi and Tryambaka. (Brahmapurana)

4. A. 2. Sapta-pravahi (seven streams): Before merging in Gangasagar (Bay of Bengal), Godavari is divided in 7 streams which are known after names of 7 Sages as Gautami, Vasishthi, Kaushiki, Atreyi, Kashyapi, Jamdagnya and Bhardwaji.

As per one view, in place of Kashyapi and Jamdagnya, names ‘Vruddha Gautami’ and Tulya’ have been accepted.

4.A.  3.  Second longest River in India : Rivers Godavari and Vaitarana originate from Brahmagiri mountain in Sahyadri mountain- range in Maharashtra. Out of them, Vaitarana travels for 154 kms and meets Arabian Sea on west whereas Godavari turns to south from east and travels for 1465 kms to meet Gangasagar (Bay of Bengal). Godavari is the second longest river after Ganga, in India.

4. B. 1. Jeevandayini (One who gives life) : Godavari is a river for welfare of people. Land in States like Maharashtra, Chhattisgad, Telangana, Andhra Pradesh and Pondicherry has become fertile with her flow for millions of years.

4. B. 2. Arogyadayini (One who bestows health) : Water of River Godavari is good for health.

The most sacred Hindu scriptures, revealed directly by God.

A mythical gem capable of fulfilling any wish,

Heaven. The third region of the seven subtle positive regions, where one experiences only happiness

God’s quality itself is Dharma. Codes of Dharma of God cannot vary; ultimately there is only one Code of Dharma, and that is the Sanatan Dharma. It is eternal, without a beginning or an end.

Another Name of the Holy river Ganga, named after Bhagiratha because of whose penance She descended onto the earth at Gangotri