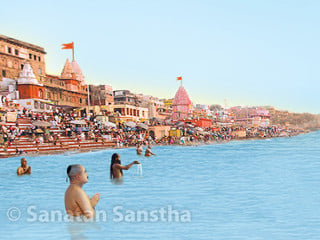 Relation between ‘Kumbh-kshetra’ and River Ganga

1.’Kumbh-Mela’ is held on the bank of Ganga at Prayag and Hardwar.

2. ‘Kumbh-Mela’ is held at Tryambakeshawr – Nashik on the bank of River Godavari. Sage Gautam brought Ganga to Tryambakeshwar- Nashik by the name of Godavari. In ‘Brahma-Puranas’, it is said that ‘Ganga beyond Vindhya Mountains is known as Gautami (Godavari)’.

3. ‘Kumbh-Mela’ is held at Ujjain on the bank of River Kshipra. The holy river, first flows in North direction and later flows towards East. It is said that where the river turns to East, at that place, Ganga had joined her during ancient times. Today, there is Shiva-linga called Ganeshwar at this place. Thus, the history of ‘Kumbh-Melas’ is inter-linked with River Ganga.

Origin of River Ganga – Her Manifestation on Earth and different names

Mostly every Hindu has a wish to have holy bath in River Ganga at least once in his life time. 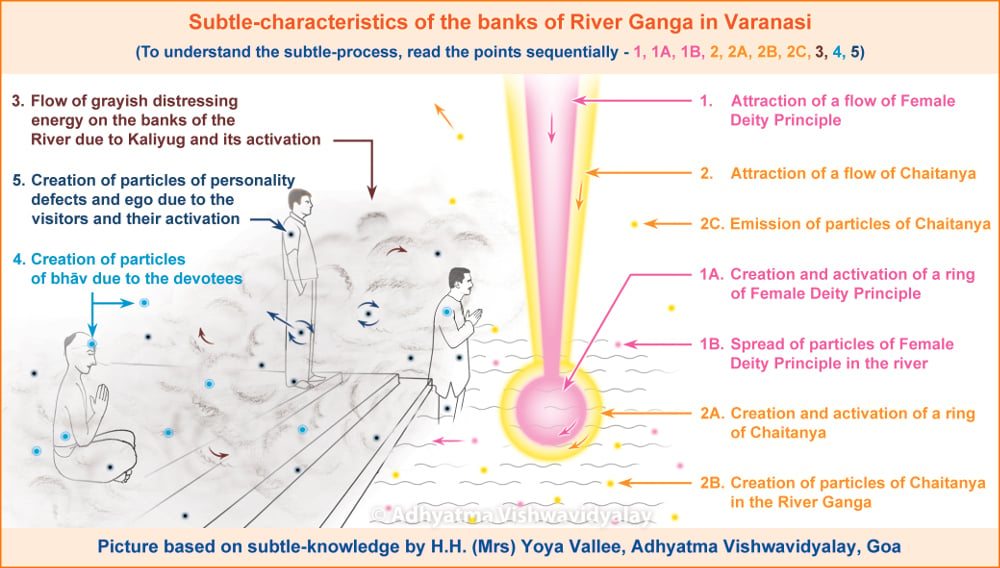 1. Derivation and meaning of the word ‘Ganga’

Meaning : One, who takes (a soul having holy bath) to the feet of God, is Ganga.

Meaning : To where a ‘Moksharthi (Mumukshu, those who want liberation)’ goes, is Ganga.

2. Origin of River Ganga in ‘Brahmanda’ and her birth on Earth

2. A. Origin of River Ganga in ‘Brahmanda’

During the incarnation of Lord Vishnu as ‘Waman’, He asked for piece of land that will cover His 3 steps as offering from the munificent King Bali. He immediately agreed to give land covering 3 steps of Waman as the King did not know Waman was actually Lord Vishnu. Waman expanded to His gigantic form; covered whole Earth with His one step and sky with His second step. While lifting His foot for His second step, it pushed the outer subtle water-covering (Note 1) of ‘Brahmanda’ and the Subtle –water outside Brahmanda’ entered Brahmanda like water bursting out from a womb and this subtle-water is Ganga !

The flow of Ganga first went to ‘Satya-loka’ where Brahmadev held it in His ‘Kamandalu’ and then He washed feet of ShriVishnu with that water in ‘Satya-loka’; out of which Ganga was born. She went from ‘Satya-loka’ to ‘Swarga-loka’ through the path of ‘Tapoloka’, ‘Janaloka’ and ‘Mahaloka’.

‘King Sagar of ‘Surya-vansh’ wanted to perform ‘Ashwamedh Yadnya’. He first sent his horse along with his 60,000 sons for defeating other rulers. Indra was scared of this ‘yadnya’ and he took away the horse and hid it near hermitage of Sage Kapil. Sons of Sagar found the horse near hermitage of Sage Kapil; so they thought that it was stolen by the Sage and they thought of attacking him who was meditating at that time. Sage Kapil, however, realized it with his subtle knowledge and with the radiance coming from his eyes, all sons of Sagar burned to ashes. Later, King Anshuman, the grandson of Sagar tried to search cause of death of Sagar’s sons when Sage Kapil told Anshuman, “Bring Ganga on Earth from ‘Swarga-loka’. Sagar-sons will be uplifted if flow of Ganga goes over their bones and ashes.” Anshuman started penance for bringing Ganga on Earth.

After his death, his son King Dilip also undertook penance for bringing Ganga on Earth. Despite penance of thousands of years, Ganga could not be brought on Earth; but due to the penance, both of them went to ‘Swarga-loka’ after death’.

After death of King Dilip, his son King Bhagiratha undertook rigorous penance which led to Ganga bestowing grace on him. Gangamata said to King Bhagiratha, “The Earth will not be able to sustain force of my huge flow; therefore, you acquire grace of Bhagavan Shiva which Bhagiratha did. Later Bhagavan Shiva arrested the flow of Ganga in His ‘Jata’ and then left it on Earth; this Ganga manifested in Himalaya and followed Bhagirath through Haridwar, Prayag etc. making the places holy, on her way to the ocean (Bay of Bengal).

2. A. 1. Day of manifestation of Ganga on Earth and Origin of River Ganga

Meaning :  On the day of Dashami in Shukla Paksha of Jyeshtha month on Tuesday and Hasta-nakshatra Yoga, Ganga manifested on Earth.

In few ‘Puranas’, the date of manifestation of Ganga is given as Vaishakh month, Shukla Paksha Trutiya and in some as Kartik month, Pournima, but in most of the ‘Puranas, it is mentioned as ‘Jyeshtha Shukla Dashami’ and has been accepted by all.

3. A. Gangotri : There are ‘Kundas (natural water- tanks) of Brahma, Vishnu and Surya etc. at this place. From her origin, Ganga flows towards West and South till Deva-Prayag by the name Bhagirathi. For six months from ‘Akshay Trutiya’ in Vaishakh, fair is held at Gangotri. In the month of Kartika, it starts snowing; therefore, ‘Ganga-dwar’ is closed from Kartik Pournima.

3. A. 1. Origin of River Ganga – Gangodbheda -teertha : ‘Gangotri’ is situated on a high hill of Himalayan range in Tehri-Gadhawal District of Uttarakhand. ‘Gangotri’ is considered to be the origin of River Ganga; but there is a rock in shape of cow’s mouth (gou-mukh) in a snow-clad cave known as ‘Shrimukh’ which is about 29 kms from ‘Gangotri’ through which Ganga manifests. This cave is called ‘Goumukhi’ in ‘Puranas’ and this place is known as ‘Gangodbheda-teertha’. In Mahabharata (Parva 3, Adhyaya 82, Shloka 65), it is said

Meaning : A person, who keeps away from food at Gangodbheda-teertha for 3 nights, gets the merit of performing ‘Vajapeya Yadnya’ and he becomes ‘Brahmaroop (State of union with God)’. This place is at a height of 4206 metres above the sea-level and it is very difficult to reach this place; therefore, very few pilgrims go there.

3. C. Devaprayag : ‘A place of pilgrimage in Tehri-Gadhawal District of Uttarakhand State ! Here, there is beautiful confluence of River Bhagirathi and River Alakananda. After Devaprayag, ‘Bhagirathi’ is called as Ganga and till here, water of Ganga is extremely pure. Here, religious rites like Shraddha etc. are performed.’ – Gurudev Dr. Kate swamiji (13)

3. D. Rhushikesh : It is a pilgrimage place of Vaishnavas situated at the foot of Himalaya in Uttarakhand. It is on the right bank of Ganga and is a very sacred place. There is ‘Triveni Ghat’ on her bank where ‘Ganga-snan’, ‘Ganga-pujan’ and other rituals are performed.

3. E. Gangadwar (Haridwar or Hardwar) : This is one of the ‘Saptamokshadayee’ ancient towns on the bank of Ganga in Uttarakhand State. The flow of Ganga, which forcefully comes down through hills and falls, comes at ground level here and starts flowing slowly and calmly. This place is also known as ‘Hardwar’ or ‘Haridwar’. Only after performing ‘Shraddha’ and ‘Pinda-daan’ rites here, can one take up the pilgrimage of Kedarnath, Badrinarayan etc. On the day of ‘Makar-sankrant’, a large number of devotees visit this place. (For more detailed information, read : Sanatan’s book ‘Kumbh-melyache Mahatva ani Pavitrya-rakshan [Importance of Kumbh-Mela’ and preserving its sanctity’])

3. F. Kashi (Varanasi) : Vishweshwar Mandir located here is known as one of the 12 ‘Jyotirlingas’. This holy temple and presence of Ganga is the reason for this city to be known as ‘Moksha-nagari’ and it is considered to be the most revered place of pilgrimage. There is ‘Mahateertha’ of Ganga at Kashi; therefore, rites and rituals like ‘Ganga-snan’, ‘Shraddha’ etc. are peformed here.  ‘Ghats’ viz. Assi, Dashashwamedh, Manikarnika, Panchganga and Adikeshav are called ‘Panch-teertha’.

3. G. Prayag (Allahabad) : This place of pilgrimage is on the confluence of 3 rivers viz. Ganga, Yamuna and Saraswati known as ‘Triveni Sangam’ and is in the State of Uttar Pradesh. It is the best place of pilgrimage in ‘Triloka’; therefore, it is also known as ‘Prayagraj’ or ‘Teertharaj’. One, who has holy bath at the confluence of Rivers Ganga and Yamuna, attains ‘Swarga-loka’ and the brave men, who leave their body at this confluence, get liberation (moksha)’, as per ‘Khilasukta’ in ‘Rhugveda’. (For more detailed information, read : Sanatan’s book ‘Kumbh-melyache Mahatva ani Pavitrya-rakshan [Importance of Kumbh-Mela’ and preserving its sanctity’]) 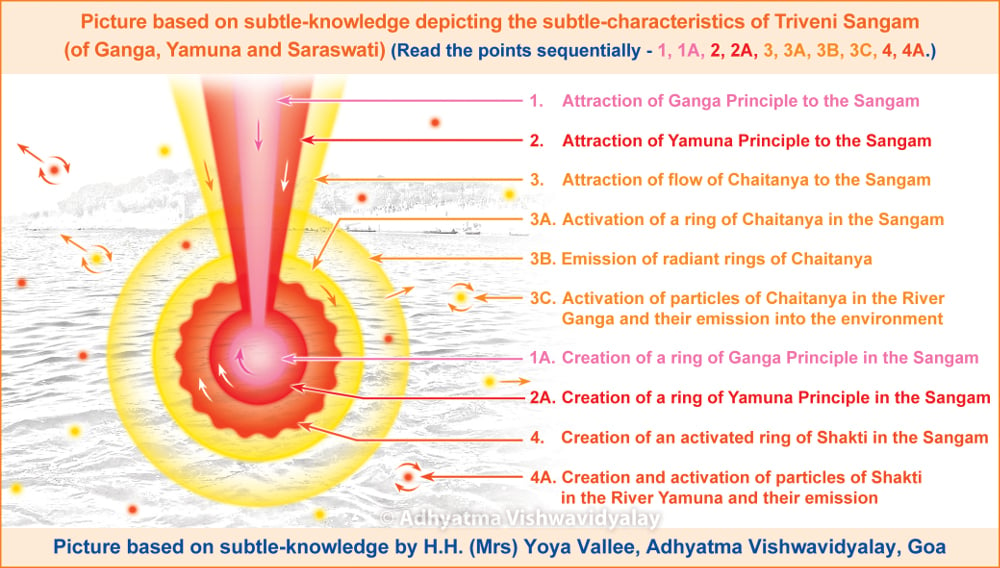 3. H. Gangasagar (Kapil-Teertha) : This place of pilgrimage is in Bengal and is one ‘dham’, out of the ‘Char (4) -dham’. Pilgrims have holy bath, ‘Kshaur’ and ‘Shraddha’ at this place. On the occasion of ‘Makar-sankrant’, 3 –day special ‘Snan-yatra’ is held here.

Ablution for cleansing of the body,

A seeker with intense desire for attaining God-realisation,

1. Subtle-body, 2. The human body as a replica of the macrocosm.

A smaller hand-woven version of dhoti.

Heaven. The third region of the seven subtle positive regions, where one experiences only happiness

Rudra (Deity Shiva) is supposed to have sprung from Brahmā’s forehead and to have afterwards separated into half male and half female, the former portion again separating into 11 Rudrās

Another Name of the Holy river Ganga, named after Bhagiratha because of whose penance She descended onto the earth at Gangotri

The one which provides a flow of sāttvik waves laden with the Shiva Principle; also the origin of River Ganga

Another Name of Deity Shiva; also a place of pilgrimage for Hindus,