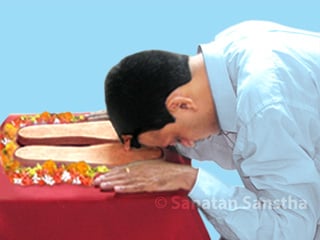 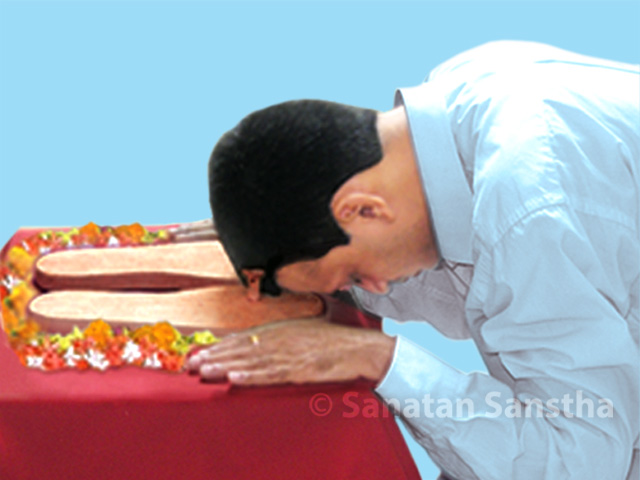 Every seeker in the primary stage has read that, in Spirituality, the ultimate means of salvation is a Guru, whereas a seeker in the advanced stage actually experiences it. Most seekers are unaware of what they should do to acquire a Guru. As a result, not only the present, but several future births are wasted. To be accepted as a disciple by a Guru, one needs to gain the grace of a Saint. However, for bestowal of the Guru’s continuous grace, one has to constantly earn His blessings. An easy solution to this is to do what Saints and Gurus expect and that is, practice of Spirituality. This article provides practical information on the qualities of a disciple which he should possess for bestowal of the Guru’s continuous grace.

1.Qualities of a disciple – Mumukshutva (Desire for God-realisation)

Although the Guru initiates one preaching, “You are That Brahman yourself”, yet one has to live discriminating reality from mere illusion, because the Guru’s teaching is merely for the convenience of the spiritual discipline. Ultimately without the disciple’s intense desire he cannot get liberated from worldly life.

2. Qualities of a disciple – Obeying the Guru’s directives

A. Do not analyze the Guru’s directives : A disciple may not be aware of the motive behind the Guru’s directives, yet he is certain that whatever the Guru advises has a benevolent purpose. That is why, a genuine disciple of the Absolute Truth carries out the Sadguru’s orders without a hint of doubt. One should obey the Guru without using one’s intellect. Then one does not feel worried about any task to be accomplished. If one obeys everything that the Guru says, then one does not make use of one’s mind or intellect. It is therefore the best means of destroying the mind, intellect and ego.

B. Obeying the Guru better by using one’s intellect : If the Guru says, ‘Do puja (Ritualistic worship)’ and the disciple performs it in a progressively better way using his intellect, then it not only amounts to obedience but also pleases the Guru. When one wishes to obey the Guru, one is automatically guided by one’s intellect to act as per the situation. Obeying Guru is one of the important qualities of a disciple.

C. The Guru’s question, wish and order are all one and the same.

One should have complete faith in the Guru’s words. In Spirituality, the disciple is like an infant without the guidance of the Guru. His belief in his Guru arises out of respect. Belief is developed through verbal information, while faith develops from spiritual experiences. There is a saying, ‘There is God where there is spiritual emotion’ but there is no such saying as, ‘There is God where there is faith’. Spiritual emotion lies in between faith and devotion. Gratitude, service, spiritual love, bliss, serenity are the components of spiritual emotion which convert faith into devotion. One should not harbour doubt after offering everything to the Guru. Having complete faith in the Guru, if one ignores happiness and unhappiness, one will experience The Supreme God. If one clutches onto sorrow, it increases all the more.

4. Qualities of a disciple – The one sacrificing everything

A. Initially, it is not possible to sacrifice everything, all at once. It is possible only gradually as one makes spiritual progress. The amount of money offered to the Guru is not important but not keeping any money for oneself is.

B. The more one sacrifices one’s intellect, the more one uses the universal intellect (that is the more the disciple merges himself in the Guru).

C. Normally, deserting one’s wife and children amounts to sin. However, if one leaves them and goes to the Guru, it is not a sin. On the contrary, it assists one in going beyond sins and merits.

5.Qualities of a disciple – The one who does not think of the offerings he has made

6.Qualities of a disciple – Humility

7.Qualities of a disciple – Service of the Guru

A. Willingness to go anywhere to render service : The disciple should be mentally prepared to go even to hell to serve the Guru, if He happens to go there. However, in reality since the Guru is The Supreme God Himself, there is no question of His going to hell !

B. One should not allow the obstacle of intellect to interfere in service towards the Guru.

D. Service of the Guru after Self-Realisation : Once one starts acquiring spiritual knowledge which is beyond words one should perform the service of the Guru physically by entering the state of the embodied soul. Generally this service is done as gratitude.

8.Qualities of a disciple – Total surrender

9.Qualities of a disciple – The one staying in the company of the Guru

A. The importance of staying in the company of the Guru : In spiritual practice the fastest path to make spiritual progress is staying with the Guru, sacrificing one’s own home. To feel real love for the Guru, one needs to be in His company. Only after staying with the Guru can one acquire control over desires. The objective of the liberated souls in keeping a disciple in Their company is to purify the disciple’s mental and desire bodies even further and to keep them in harmony with Their own. It is important to remain close to the Guru till He bestows His grace. Thereafter however, this is not a necessity as the Guru’s mind is Omnipresent and the disciple gets the spiritual experience that the Guru is perpetually with him.

B. The progressive steps in the behaviour of the disciple with regard to the Guru’s presence

10.Qualities of a disciple – The one who respects the Guru

When a disciple performs the spiritual practice advised by the Guru, he gets spiritual experiences and then, he automatically begins respecting the Guru.

11. Qualities of a disciple – The one curious about Spirituality

12.Qualities of a disciple – The one who can win over the Guru

The states of a Guru vary from a momentary state of the jivadasha to jivatmadasha and Shivatmadasha, each lasting for some time and the state of The Supreme God lasting for most of the time. If one is able to behave appropriately for that state, that is, one is able to fulfill His expectations then the Guru is appeased.

13.Qualities of a disciple – The one without ‘ego’

The one who has no ‘ego’ is a disciple and the one who is devoid of the spiritual emotion that ‘He is I’ (So’ham) is a Guru.

14.Qualities of a disciple – For the sustenance of Absoluteness the one remaining intensely devoted to the Guru even after its attainment

The Moksha (Final Liberation) is defined as the “destruction of desires and instincts”. Destruction of the ego also means the same. Saints preach that until the end, devotion solely unto the Guru that is, worship of the Guru is necessary for the sustenance of Absoluteness.

One should constantly harbour the awareness that one’s spiritual progress is occurring (mainly) because of the Guru. If that is absent then at any moment ego can manifest in oneself. A seeker used to weep out of gratitude thinking, ‘My chanting is occurring automatically because of my Guru’.

The comparative importance of some qualities of a disciple

State of the embodied soul.

A mode of speech where chanting occurs automatically. It is so named as it is the intermediate stage between Vaikhari and Pashyantī modes of speech.