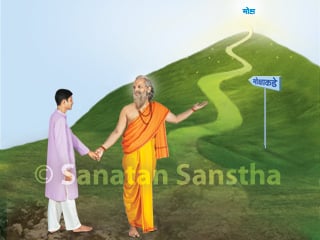 1. Difference between Guru and Teacher

The teacher teaches for a specific period of time and only through the medium of words. On the other hand, the Guru continues to guide His disciple twenty-four hours of the day both through the medium of words and that beyond them. A Guru takes care of His disciple in any catastrophe while a teacher has hardly any concern about a student’s personal life. In short, a Guru pervades the entire life of a disciple while a teacher is associated with a student only for a few hours and that too confined to teaching a few subjects.

2. Those who give spiritual discourses (pravachans) and Gurus

‘The following table illustrates the differences in speech of those giving discourses and Gurus (saints).

3. An average individual, a seeker and a Guru

The table below gives the desire for performing a particular action, the total action (karma) and the act (kriya) and the proportion of the two in an average individual, a seeker and a Guru. An action implies to an act performed along with a motive whereas an act is devoid of a motive.As one makes progress in one’s spiritual practice, actions of the various bodies excluding the physical body go on reducing proportionately. Thus the total action and act go on diminishing.

Saints give some guidance to accomplish some achievements, in both the materialistic as well as the spiritual realms. When a saint accepts a seeker as a disciple He becomes the latter’s Guru. A Guru guides only regarding achieving the realm without materialistic expectation. Once a saint commences His mission as a Guru His desire to help His devotees to overcome their worldly obstacles gradually decreases and finally ceases altogether.

Every Guru is a saint, but the reverse is not always true. Inspite of this being so, majority of the characteristics of saints also apply to Gurus. They are given in ‘Science of Spirituality : Chapter 42 – The Spiritually Evolved’. The following table grossly compares a saint and a Guru both with a spiritual level of 80 %.

* Both saints and Gurus have a spiritual level of atleast 70%. After crossing 70%, spiritual progress is faster in Gurus than in other saints. They attain the level of a Sadguru (80%) and a Paratpar Guru (90%) faster than other saints attaining the same spiritual levels. This is because They are constantly engrossed in the mission of spiritually uplifting a disciple, while saints at times perform tasks from the Great Illusion, for the sake of Their devotees.