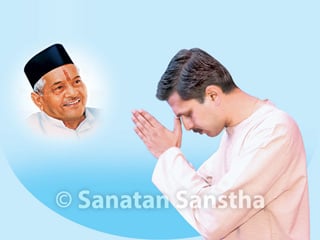 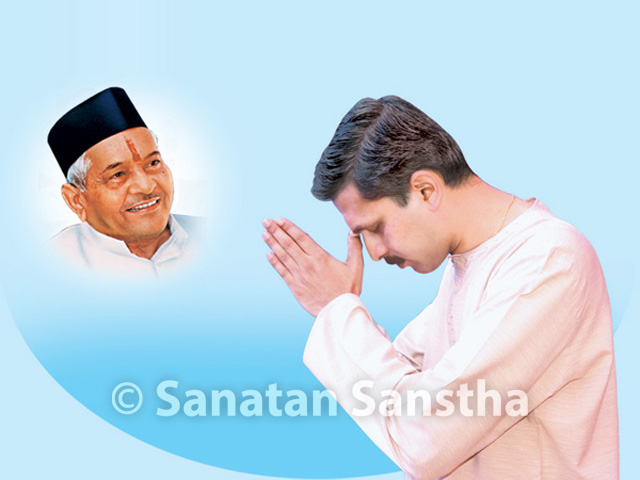 Every seeker in the primary stage has read that, in Spirituality, the ultimate means of salvation is a Guru, whereas a seeker in the advanced stage actually experiences it. Most of us don’t know what is a Guru, and are unaware of what they should do to acquire a Guru. As a result, not only the present, but several future births are wasted. To be accepted as a disciple by a Guru, one needs to gain the grace of a Saint. However, for bestowal of the Guru’s continuous grace one has to constantly earn His blessings. An easy solution to this is to do what Saints and Gurus expect, and that is, practice of Spirituality. Once the Guru’s grace is obtained, to maintain it perpetually it is mandatory for one to conscientiously continue the spiritual practice recommended by the Guru throughout one’s life.

Most of us don’t know what is a Guru. The aspect of God that looks after spiritual teaching and spiritual growth in the Universe is known as the Guru. This is known as the unseen or unmanifest (nirgun) Guru or the Teaching Principle of God. The unmanifest Guru then works completely through some of these evolved individuals who are then known as the manifest (sagun) Guru or the Guru in the human form. In other words, a person has to be at least of the 70% spiritual level to qualify as a spiritual guide or a Guru. The Guru in human form acts as a beacon of spiritual knowledge for humanity and is in total alignment with the Universal Mind and Intellect of God. In short, the Guru is the One who dispels the darkness of spiritual ignorance in humanity and bestows upon them spiritual experiences and spiritual knowledge.

1. Definition and meaning of Guru

2. How to find and acquire Guru

A. Do not go in search of a Guru: The Guru principle being very subtle and a seeker’s power of perception being more of the gross and very little of the subtle dimension, in Spirituality one cannot find a Guru despite a search. It is the Guru who chooses and spiritually uplifts His disciples. Once a seeker attains a spiritual level of more than 50%, the Guru Himself accepts him as His disciple. However, despite the spiritual level being just 40%, if a seeker has intense motivation to make spiritual progress, then he is blessed with a Guru.

B. One should not test the Guru : If one is able to develop faith only after testing, then one will have to test the Guru. The examiner however is superior to the pupil. If one feels one is superior, then how can one accept Him as one’s Guru ?

D. Whom should one choose as one’s Guru ? : Each one should become a disciple of the nirgun (Non-materialised) Guru and not just a follower of philosophy. Only when one experiences the unmanifest can one recognise the sagun (Materialised) and only after realising the unmanifest does one become aware of where one stands spiritually.

F. Acquisition of a Guru through guidance in the subtle dimension : It is well known that Saint Tukaram was initiated with the Gurumantra ‘Rama Krushna Hari’ by His Guru Babaji Chaitanya through a vision in a dream. He said ‘Now God has granted me His vision and enlightened me with the fact that the one who you thought was your friend is now your Guru; that is why I am entrusting you in His custody. There is no longer any duality left between Him and Me. We are befitting each other’s grace totally. Henceforth He shall be your Guru.’

3. The importance of the Path of Guru’s Grace

Without Gurukrupa (Guru’s grace) it is difficult to progress beyond a spiritual level of 60%, no matter which path one practices, Karmayoga (Path of Action), Dnyanyoga (Path of Knowledge), Bhaktiyoga (Path of Devotion) or any other. In Gurukrupayoga, a seeker learns how to acquire the Guru’s grace faster, by sidetracking the other paths rather than wasting years practicing them.

4. The importance of the Guru’s grace

From the beginning of the state of the embodied soul each one has the illusion (misconception) that ‘I am distinct from Brahman’. By studying the scriptures one realises that, ‘I am not distinct from Brahman’ by means of his intellect. However later he begins to feel ‘If I am not different from Brahman then how is it that I do not experience it?’ and thus another illusion develops. This illusion is destroyed solely by the grace of the Guru. Once the devotion of the manifest begins, actual sakshatkar that the manifest is really unmanifest Bliss occurs, the knowledge of the unmanifest that is thinking that the unmanifest is different from the manifest dissolves and one experiences “I am Brahman” that is he experiences non-duality.

5. What should one do to acquire a Guru and His grace ?

The only virtue responsible for the rapid acquisition of a Guru and the constant bestowal of His grace thereafter, is intense motivation for Liberation or intense yearning for a Guru. A salient point to be noted here is that one cannot acquire a Guru without bestowal of His grace. A Guru is already aware of who His future disciple will be. One should undertake the spiritual practice in order to acquire the grace of the Guru.

6. The necessity of continual grace of the Guru

Once one acquires a Guru and is initiated with a Gurumantra, the bestowal of Guru’s grace begins. To maintain it perpetually it is mandatory for one to conscientiously continue the spiritual practice recommended by the Guru throughout one’s life.