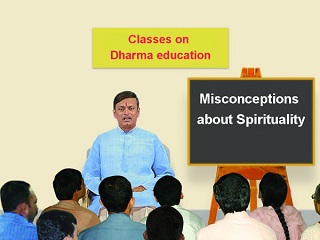 About 30% of the population feels that if God and Saints get angry with them, they will be harmed. As directed in letters which they have received in the name of Saints or God, many people send twenty-five to fifty copies of such letters to others, with the fear that if they do not comply, then they will suffer a great loss. Similarly, people give alms with the fear that if a person in the garb of a mendicant is hurt, then he may wish one ill and may even curse. There is absolutely no reason whatsoever to have such fears. However, due to the fear that if we err, a sin shall be committed and we will be punished by God for it, at least 30% people from society refrain from making mistakes.This is an indirect benefit of this school of thought.

From the example given ahead, we can realise how Bharatiyas are deeply affected by blind faith.

We come across 20% people in the society who have blind faith. Although there is a loss of 10% to the society because of this, there is 20% benefit too, since at least some people refrain from performing bad deeds out of blind faith.

About 30% people make money under the garb of Spirituality, for instance by starting a ‘yoga’ or ‘pranayam’ (Controlled breathing exercises) class. At one such ‘pranayam’ centre, there was a choice of 18 separate courses of pranayam for improving health, improving concentration, personality development etc. Names of the 18 courses were printed in their pamphlet merely to attract people. In reality, the same pranayam was taught in every course!

About 95% of the ‘so-called’ ‘Holy men’ are fake.They make money in the garb of mendicants. Some monks give talisman-threads to solve materialistic problems such as getting good marks in examinations, getting a good job etc. By doing so, they are not only cheating the society but they also make the society inactive.

Some Gurus advertise through newspapers that they will initiate with a Gurumantra at a particular time. Disciples of some Gurus also advertise that ‘our Guru gives Gurumantra for Rs.150’. These fake Holy men should realise that, instead of roaming around adorned with gandha (Sandalwood paste) or tilaks, their behaviour should be such that people worship them, only then will they atleast be emancipated spiritually.

Due to these fake Holy men, the image of real Saints gets tarnished. Also, many people lose their precious years in performing meaningless spiritual practice preached by such fake Holy men.

About 30% people in the society try to educate the masses on Spirituality pretending to be very well-versed in it, when in reality they know nothing about it. For instance, knowing absolutely nothing about ‘Shriram’, someone wrote, ‘Ram was never ideal. He can never be the seat of one’s faith….. The concept of God itself should be uprooted’. Yet another said, ‘Now let us see to it that God retires!’

About 55% people feel, ‘let those who have a liking for Spirituality study it; of what use is it to us ?’ They do not know that, in the life of an average person, 20% of physical and psychological problems in wilful actions performed are caused due to factors other than spiritual. The remaining 80% problems are caused by spiritual factors alone. In other words, of every five distressed people, four can acquire happiness merely by undertaking spiritual practice; so, four out of five people in a family, relatives and friends definitely need Spirituality. spiritual practice enhances our ability to endure destiny. All this of course is from the worldly perspective. To attain Moksha, however, there is no substitute for Spirituality.

Some people feel that secrecy has to be maintained in Spirituality. Why do people following Aryadharma observe secrecy in Spirituality? In this regard a Saint, Shri Gulabrao Maharaj says – ‘Only those who feel that there is nothing in Vedant other than idle talk say this. When there are trade secrets even in business, why should one feel that there should be none in Spirituality? Besides, one cannot understand the true meaning properly, despite voluminous writings in Holy texts. Secondly, knowledge from Holy texts goes into the hands of people who have no authority over it. Thus, a genre of people is generated, who impart knowledge to others merely by reading Holy texts without completely following the Path of Spirituality. When knowledge is revealed in such a manner, people feel that worldly life alone is more valuable than Spirituality.’

A. We will perform spiritual practice in old age

About 50% people know that Spirituality is useful, yet 50% of them say, ‘We will perform spiritual practice when we grow old’. There are four mistakes associated with this statement.

B. Undertaking spiritual practice of one’s favourite Deity or a Saint according to one’s wish

C. Thinking that one should not get married

About 30% of seekers feel that if they want to make spiritual progress, they should not get married. However, this is incorrect due to the reasons listed ahead.

E. Misconceptions about the Guru

Some have the misconception that the Guru will eliminate their worldly obstacles. This is incorrect.The Guru has no relationship with worldly obstacles, but is concerned only with the spiritual progress of His disciples.

10. Reasons for misconceptions about Spirituality

A. Misguidance by ‘prominent’ members of the society

We should generally not speak on a subject about which we do not have adequate knowledge. Despite this rule, several ‘prominent’ personalities from other fields in the society talk on Spirituality even when they have had no spiritual experiences. Some of their listeners, especially the younger generation, not realising that their opinions should not be taken seriously, get misled and misconceptions regarding Spirituality are created in their minds. A few
samples of quotes on Spirituality by such ‘prominent’ personalities are given ahead. This may also be called idle talk !

No matter how many praises are sung of an icon of Sat (Absolute Truth) like Ram, they will always be far too little. However, these people will never realise this as they have spent their lives in Asat (Non-truth, that is, Maya).

B. Spread of ignorance through the media

We have already seen how ignorance spreads through newspapers. The radio and television too project repeatedly that things such as casting an evil eye, black magic like bhanamati, possession, etc. are all fake when these really do exist.

C. Opposition to the spread of spiritual knowledge by universities

We had written to the executive committee of extra mural education of the University of Mumbai to include the subject of Spirituality in their curriculum to help to eradicate the misconceptions about Spirituality. In a letter dated 27th June 1988, the University rejected the request. Our universities will probably awaken once the study of this subject commences abroad!

D. Spread of ignorance by universities

In a television documentary produced by a university it was said that astrology, the science of mantra, asking a deity for answers through media such as flowers, leaves, etc. in a temple (kaul), etc. are all fake.

E. Indirect resistance from the government

A television serial depicting factual incidents beyond the comprehension of the intellect was discontinued by the government due to pressure from the so-called rationalists. However Shakespeare’s play ‘Hamlet’ which also shows a ghost was allowed to be telecast!

‘The upliftment of the lowest caste of people (harijans) and tribals will bring back Rama’s rule of Righteousness (Ramarajya) to our country, in the real sense….. The chiefs of all hermitages (ashrams), mendicants and saints should leave their ashrams and go into the world to serve the harijans and tribals’- the quote of a well-known Swami. One having true spiritual knowledge even to a small extent will never make such statements. Such statements usually stem from a desire for cheap publicity.

The only way to put an end to this vicious cycle, is by accepting the researcher’s word as the authority. Only then will researchers be able to march ahead.

Question: ‘Why is there so much pessimism about studying Spirituality?

Answer: First and foremost it is the absence of appropriate education. Secondly, people are not imparted information about this subject in their day-to-day life. It is but natural for people not to develop a liking for Spirituality, as no one provides true knowledge about God. Formerly preaching, prayer and the sacred and venerable holy texts and religious books were closely associated with life. Today due to the growing materialism, they have lost their importance and value in the life of the common man. “Money” itself has become the “Righteousness (Dharma)” of the new era.’