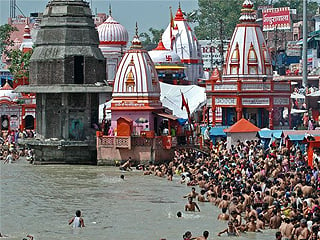 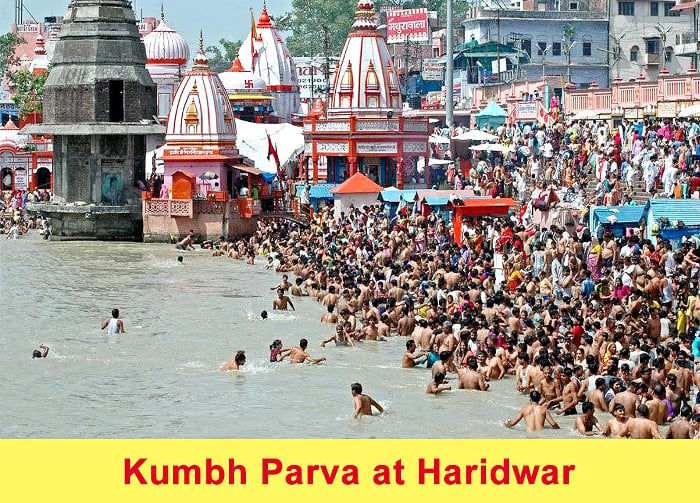 Kumbha Mela is the world’s largest religious fair. It is not only a display of supremacy of the Bharatiya culture, but is also a spiritual congregation that provides satsang. The Kumbha Mela held every 12 years at Prayag, Haridwar, Ujjain and Tryambakeshwar-Nashik on the occasion of the Kumbha Parva has an important place in the Hindu civilization. The spiritual glory and cultural importance of the Kumbha Parva is unique. 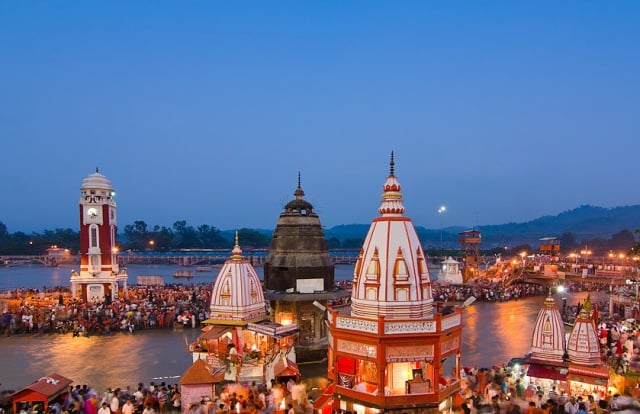 This is the ancient pilgrimage place situated on the banks of Ganga in the Uttarakhand State. The torrential flow of Ganga descending from the valley of Himalayas slows down here as it enters the plateau region. This place is also called ‘Gangadwar’.

1B. According to Vaishnav sect : A Vishnupada has been engraved on a rock near Gangadwar; hence, this place is famous as ‘Har ki pouri’ (God’s steps). Ganga descended from Heaven near Hari’s steps; hence, the devotees of Vishnu consider this as their pilgrimage place and call it ‘Haridwar’.

2. Significance of the Holy place

2A. Place that helps attain Heaven : A shloka which describes the importance of various Holy places is given ahead.

Meaning : The sins of man are washed away when he bathes at the Holy places of Gangadwar, Kushavarta, Bilvak, Neelparvat and Kankhal, and attains a place in Heaven.

2B. Place from where the pilgrimage of Himalayas begins : The Himalayan pilgrimage begins from Hardwar (Haridwar) itself. One cannot go on this pilgrimage to Kedarnath, Badrinath etc. without performing shraddha and pindadan (Rituals performed for departed ancestors) at Haridwar.

3A. Brahmakunda : There is a Brahmakunda at Haridwar. After Bhagiratha brought Ganga onto the earth, a king performed penance, pleased Brahmadev and sought a boon that He would always reside at Haridwar. Brahmadev said, “So be it”, and the king named the place ‘Brahmakunda’. The water of Ganga flows perennially through this big kunda (Water body).

3B. Har ki pouri : This is on the opposite bank of Brahmakunda. There is a small temple of Ganga on the step where every evening Arati (Hymns in praise of Deities) is performed when the pilgrims release lamps in a leaf bowl in the fl owing waters. This scene is very enchanting.

3C. Kushavarta : This is near Brahmakunda where the rites of shraddha and other rites are performed. On the day of Mesha Sankranti, devotees throng to this place.

3D. Mayapuri
1. The Puranas mention that the seven cities of Ayodhya, Mathura, Maya, Kashi, Kanchi, Ujjain (Avantika) and Dwarakapuri are Mokshabestowing. Thus, this Mayapuri is one of them.
2. There is a temple of Mayadevi about a mile away from Har ki pouri. After Deity Shiva destroyed the Yadnya of Daksha because he insulted Parvati, Daksha surrendered to Deity Shiva. The entire incident took place due to Maya (The Great Illusion) of Supreme God; hence, Deity Shiva gave a boon to Daksha that this land of Yadnyas would be considered as ‘Mayakshetra’, so says the Kedarkhanda of Skandapurana.

3E. Kankhal : There is a mention in Harivanshapurana that this is a Holy place. When Daksha Prajapati insulted Deity Shiva, Sati Parvati committed self-immolation here. Later, upon the prayer of Daksha, who had surrendered himself, Deity Shiva established a Shivalinga to constantly reside here. The Shivalinga is self- materialised and is called ‘Daksheshwar’. The Sati’s kunda is at the place where She committed self-immolation.