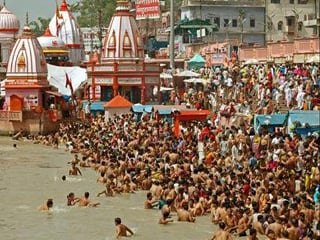 Benefits of bathing during Kumbh Parva at Prayagraj 2019

Prayagraj, one of the three pilgrimage places of Kashi, Prayagraj and Gaya, is unique from religious perspective. Prayagraj is ‘Akshaya kshetra’. The entire world will be submerged in the massive floods during the Pralaya (Dissolution of the world); but not Prayagraj.  Every 12 years  and 6 years, Kumbha Mela is held at the Triveni Sangam of Ganga, Yamuna and Saraswati in Prayag.  This Kumbha Parva comprises three Parvakals (Auspicious
time) – Makar Sankranti, Maghi (Mouni) Amavasya and Vasant Panchami. The Maghi (Mouni) Amavasya is the principal Parva and is referred to as ‘Purnakumbha’. The Magha Pournima is also considered as a Parva (Auspicious) time. A Holy dip in the Ganga has special significance on the days of all the four Parvas.

According to the Padmapurana, it is extremely rare to have the privilege of a Holy bath in Prayag in the month of
Magha. According to Agnipurana a Holy bath every day at Prayag is equivalent to the benefit obtained by donating millions of cows; according to the Brahmapurana it is equal to performing Ashwamedha Yadnya and according to Matsyapurana, it is equal to the pilgrimage to more than 100 crore shrines. Mahabharata says that Deity Brahma Himself was unable to describe the benefits obtained by donations and a Holy bath on Makarsankranti at Prayag.

A festival observed on 15th January each year; the date changes every eighty years.

A sacred text of Hindus that contains hymns to be recited by the officiating priest.