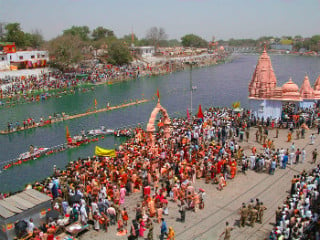 Along the banks of Shipra River, many bathing ghats are located. The Shri Ram Ghat, also known as Ram Ghat is the most ancient bathing ghat and is very popularly visited during the Kumbh Mela. It is located near the Harsiddhi Temple.

Ujjain is compared to the Greenwich of India due to the fact that the first meridian of longitude passes through it. According to Indian astronomers, passing of the Tropic of Cancer through the picturesque city of Ujjain gives it a pulsating energy that makes the pilgrim journeys of people
a spiritual revelation.

Every 12 years, during the Kumbh Mela, along the city’s elaborate riverside ghats, Goddess Kshipra, which symbolizes purity, clarity and chastity, is worshipped by thousands and thousands of devotees.

The temple of Navagraha, the nine planets, on the Triveni ghat of Shipra River is a prominent centre of attraction for the pilgrims. There is a confluence of Khan river near Triveni ghat on the Shipra River. Mythological sanctity of the invisible river Saraswati, associated with the story of Triveni-sangam, is attributed to this place also. Presently, the Khan river , known with different names around Indore, has been blocked for irrigation in the upstream. Its water is not worth welcoming into the Shipra River.