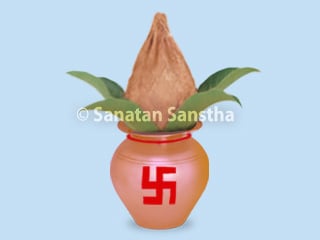 1. The bride’s entry into the house (Vadhugruhapravesh) and naming the bride (Vadhuche namakaran)

When the wedding procession reaches the groom’s house, a mixture of curd and rice is moved around the heads of the couple and thrown away. The bride lightly strikes a tall cup filled with rice with her right foot and empties it as she crosses the threshold of the main door. Then worship of Lakshmi (Lakshmipujan) is performed and the bride is given a new name by the in-laws’.(1)

At night, the bride and groom should look at Dhruv, Arundhati and Saptarushi in the sky. The bride is asked to look at Dhruv with the intention that she may attain a stable position in the family akin to Dhruv and be endowed with eternal wifehood. Dhruv signifies eternity, Arundhati chastity and Saptarushi is a symbolic reminder of the debts to sages.

In the olden times the marriage ceremony would continue for two days or so. At that time this rite would precede the ritual of taking the idol of Annapurna, etc. which was held on the day following the marriage.

3. The rituals on the day following the marriage

3.1 The sacrificial fire on entering the home (gruhapraveshaniya hom)

This sacrificial fire should be performed at home. The resolve: ‘I am performing the sacrificial fire on entering the house so that the marriage fire (vivahagni) acquires a conjugal status and to appease The Supreme Lord. During the first three oblations (ahutis) in the fire one should offer clarified butter saying, ‘May Lord Brahma generate good progeny from us. May Aryama that is the sun, endow us with a long life. O bride, instead of becoming sorrowful make me, my friends, well-wishers and servants happy. Also look after the animals I have domesticated and make them happy’. At the time of the fourth oblation one should say, ‘O bride, serve well your father-in-law and mother-in-law, become their favourite and gain respect from them. Also gain respect and become the favourite amongst the sisters-in-law and brothers-in-law’, and offer clarified butter (ghee). Here the resolve is that the bride should blend herself with her new home. Nowadays this sacrificial fire is not performed separately. It is completed by offering an oblation in the sacrificial fire of marriage (Vivahahom) itself.

3.2 Taking away a seashell (kavadi), betelnut, or a piece of turmeric

In this ritual, the husband holds a seashell which represents the vagina or a betelnut (symbolic of the phallus) in his hand and the wife releases it. Later on, a piece of turmeric was substituted for the betelnut as a symbol of the phallus.

3.3 The vowed religious observance of the bride and groom (Vadhu-var vrat)

After completion of the sacrificial fire on entering the home, the bride and groom should not eat salt and salty foods for either three or twelve days. Also on the day after the marriage, imagining that the bride is a celestial beauty (apsara) and he himself a celestial musician (gandharva) the groom should worship Mahadevi. On the third day after the marriage presuming that the bride is Svaha (consort of the deity of fire) and he Agni (the deity of fire), he should worship a female deity named Kalika. On the fourth day thinking that he is human, he should worship the female deity Shankari. Thus, right from the beginning, one is taught to keep a control over sexual desires. Contrary to this, in western countries the couple goes on a honeymoon soon after marriage.

The ornaments and clothes that the groom’s mother gifts to the bride before the ritual of Airinidan are known as “Sunmukh”. In this ritual the mother-in-law first puts sugar into the daughter-in-law’s mouth. This is a popular custom.

On the fourth night following the marriage the father of the bride has to give an offering of sixteen sifting pans woven from bamboo and a big bamboo basket to the groom’s mother. This collection of sifting pans and the basket constitute the “airini”. This offering is made for the fulfillment of the ritual of giving away the daughter (Kanyadan) and the growth of her lineage. Nowadays this is performed on the day of the marriage prior to the departure of the procession of the bride and groom.

There is no sanction for the ritual of Airinidan in the Gruhyasutras. It is performed merely as a popular custom. Another name for bamboo is vansha (lineage). Hence ‘airini’ is a symbolic representation of the growth of lineage. The aim behind gifting the sari to the groom’s mother at the time of Airinidan is to please her.

3.6 Taking the idol of Annapurna

After the offering (dan) to the groom’s mother is made the bride and groom are made to worship Gouri and Har. At that time the groom takes away the idol of Annapurna from the temple in the father-in-law’s house.’(2)

The custom of performing a stormy dance with quick steps called Gondhal in the house, after the marriage, is popular in some places.

4. Farewell to the deities and the removal of the pandal (Devakotthapan and mandapodvasan)

‘After the conclusion of the auspicious function the deities are bidden farewell. The host along with his wife immerses the deities in water (visarjan) amidst chanting of mantras. Then he applies oil to the branches tied to the pillars of the pandal and to those wound with thread and placed in a sifting pan. He then bathes them with warm water and disengages them. After performing Svastivachan and placing them in the sifting pan, Brahmans sprinkle water on them. This is followed by consecration (abhishek) of the host couple with the same water. The thread used when installing the deities is wound to a betelnut and handed over to the host. The host expresses the wish “May such auspicious occasions take place at my home every six months” and the Brahmans bless him accordingly. Finally the sifting pan of the deities is struck upon to produce a sound and the pandal is removed.’(3)

5. Comparative importance of various rituals in the sanskar (rite) of marriage, in the merging together of the bride and the groom

5.1 Merging of the bride and groom by the rite of marriage

In short, the rite of marriage is done with the resolve of making the bride and groom suitable for each other’s spiritual progress.

6.1 The implied meaning of using an earthen pot in the important sanskars (rites) of birth, thread ceremony (Upanayan), marriage (Vivaha) and death

‘To bury the umbilical cord at the time of birth, to install the deity of the pandal (mandapdevata) during the thread ceremony, while worshipping the deity of the pandal and Gourihar during marriage, so also when taking fire to the crematorium an earthen pot is used. It is however named differently on different occasions, as earthen pot, varun, sankrant, an earthen vessel (mruttikapatra), gadge. The events of birth, marriage and death although distinct with respect to the generation of happiness and sorrow, are just transitional states from the emotional point of view. These transitions of life events occur around just one object, that is the human body. Just as when the vast sky (akash) gets incorporated in the pot (ghata) it is called ghatakash (the pot being the object), so also due to the influence of the Great Illusion (Maya) the Infinite Brahman gets incorporated in the human body. The value of the human body is just as much as the pot. As soon as the sway of the soul principle is over, the pot of this human body is destroyed. The importance accrued by the human body is only by the access of the soul principle. The earthen pot is placed before oneself with some reason or the other with the noble intention of strongly reminding one of this fact.’(4)

6.2 The rules of staying at the in-laws and parents’ home by the bride after the marriage

In a newly-wed couple there is still no consistency in marital life and thinking. Their minds have not yet blended with each other. The apparent feeling of harmony is due to physical attraction and sexual gratification. At this time excessive indulgence in sex is harmful to health. Since constant contact of man and woman throughout the year is not advisable, the scriptures have laid down rules for the bride’s stay.’(5)

The explanation given in the above paragraph is from the physical and psychological points of view. The explanation from the science of Spirituality is as follows. Every relationship affects an individual. As change is the law of Prakruti, after a few months a relationship may prove to be happy or sorrowful. Thus the rules with regard to the bride’s stay have been framed considering this fact.

‘From the time of the engagement (Sakharpuda) till the day of the wedding if any relative in any of the three generations expires then that marriage is thought to be inauspicious. However there appears to be some confusion about this concept or custom since the ritual of engagement has become prevalent only in the last hundred to hundred and fifty years. Generally if a tragedy occurs after the promise of marriage (Vanhnishchay) is made then the marriage is considered inauspicious by the scriptures. The concept of engagement is not included in this. The promise of giving the daughter’s hand in marriage is a part of the rite of marriage and takes place on the eve of the wedding. If a tragedy occurs during this time then the in-auspiciousness is understandable. However weddings are fixed six to eight months in advance. Due to social factors, obstacles and booking of the marriage hall obviously weddings have to be fixed quite a few months in advance. If some relative (1st, 2nd or 3rd cousin) expires then breaking the engagement considering it inauspicious would not be rational. However if one’s close relatives like parents, grandparents, great grandparents expire then one feels restless as the marriage is not propitious. If one decides to break the engagement one has to consider the fact that it has been arranged painstakingly. At such times Vinayakshanti and Shripujan are performed and the wedding is held. Generally such events do not point to in-auspiciousness as they have just occurred by chance. However if such disasters occur one after another then having the marriage is not appropriate. According to the law of nature if destiny has to give a warning about a bad omen then it does not stop once but repeats it twice or thrice. Hence while deciding about in-auspiciousness one should neither delay nor be careless.’(6)