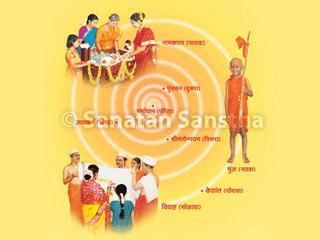 The Vedic rituals performed by the parents and the teacher on the son or daughter from the time of conception till marriage so that they may perform balanced [sattvik (sattva predominant)] actions are referred to as the sanskars (rites). There are sixteen important sanskars.

‘A process of increasing the potential. The origin of the word sanskar is sam (सम्‌ ) + kru (कृ) + ghyan (घञ्‌) = sanskar (संस्‍कार). Thus the word sanskar is formed by prefixing the preposition sam denoting balance, to the verb kru and suffixing ghyan to it. It has manifold meanings such as to improve, to purify, to remove shortcomings in an object and to endow a new, attractive form to it. In short, the process by which positive qualities in man are developed and enhanced is known as a sanskar.

2.1 Sanskars and other spiritual practices

4.1 The method of celebration

Two or three days prior to performing the sanskars, the house should be painted. A picture of Lord Ganapati should be installed at the main door of the house. If there is a compound or courtyard in front of the house then a pandal should be erected, and after smearing the floor with cowdung, designs of auspicious symbols such as the svastik, lotus, etc. should be drawn using special powder of soft white stone (rangoli). Before the ceremony of the sanskar, the one on whom the sanskar is to be performed as well as the relatives should wear new clothes and ornaments. Relatives and well-wishers should present gifts to the one on whom the sanskar is being performed.

In order to attract deities they are invoked, praised and prayers are offered to them.’(4)

Every sanskar is commenced with 1. The ritualistic worship of Lord Ganapati (Ganapatipujan), 2. Punyahavachan, 3. Matrukapujan, 4. Nandishraddha and 5. Acharyavaran. Then the specific sanskar is begun. The relative importance of the supporting rituals and the sanskars is as follows:

* Since the importance of each supporting ritual is 1%, the sum total of the five is 5%.

A. The objectives: To prevent any obstacle from disrupting an auspicious occasion, it is begun with the worship of Lord Ganapati, a practice which is prevalent since the last century.

D. The ritual of worship

A. The objectives: ‘Punya (पुण्‍य) + aha (अह) + vachan (वाचन) = Punyahavachan (पुण्‍याहवाचन) which means getting the Brahmans to pronounce that the day of commencement of the ritual is an auspicious one. The day of commencing any auspicious ceremony is chosen after referring to the Hindu almanac (panchang). However the Brahmans proclaiming the day to be auspicious and blessing the host accordingly augments the benefits obtained from it.’(5)

B. The importance: Due to their utterance that day acquires energy.

D. Preparation: The wife should sit to the right of the host and the one on whom the sanskar (rite) is to be performed should be seated to her right. The aim behind sitting to the right of her husband is to generate more energy during the ritual. The right side corresponds to the Surya nadi (Sun channel).

E. The resolve (sankalpa): After uttering the name of the place and the time one declares the resolve by saying ‘कार्यांतर्गतं पुण्‍याहवाचनं करिष्‍ये ।’ which means ‘I am performing Punyahavachan for …. sanskar’.

F. Touching the earth (bhumisparshan): Chanting the mantra, first the earth (ground) on the right hand side (since the host performing the religious ceremony is facing the east, the hand touching the ground is in the southern direction) and then the earth on the left hand side, in front of oneself (that is the northern direction) should be touched. Energies from the south are distressing. To prevent them from causing distress, one offers obeisance to them by touching the earth. The energies from the north are however saluted as they are pleasant.

G. Installation of the pot (kalashsthapana): Two small heaps of rice should be made on the ground amidst chanting of a mantra. Later, chanting the mantra two pots of either gold, silver, copper or unbroken earthen pots should be placed on these two heaps. [The varying ability of various metals to absorb pleasant energy is given in ‘Science of Spirituality : Chapter 7 – Path of Devotion (Bhaktiyoga)’.]

Prayer made to the pot: Lord Vishnu is at the mouth, Lord Rudra at the neck and Lord Brahma at the bottom of the pot. In the middle are the assistants of the Matruka deities, etc. Then consecrated unbroken rice should be put in the pot facing the north.

After paying obeisance to everyone (‘मातापितृभ्‍यां नम: । इष्‍ट देवताभ्‍यो नम: । …….. सर्वेभ्‍यो देवेभ्‍यो नमो नम: ।’ that is obeisance to the mother deity, father deity, the benevolent deity and all other deities) one should sit with knees touching the ground. Then cupping the hands in the shape of a lotus, one should carry the pot facing the north and touch it to one’s forehead, that of one’s wife and that of the priest, thrice. This is obeisance offered to the pot so as to be able to absorb the energy generated in it. Then the priest should say ‘May this day be an auspicious one’. Chanting the Niranjan mantra, married women (suvasinis) wave a lit lamp in a circular motion in front of the host and hostess of the religious ceremony and the one on whom the sanskar (rite) is being performed. Then lifting the right pot with the right hand and the left pot with the left the water from it should be poured into a vessel in a continuous stream. (Variation : The right hand should be used to lift the pot on the left and the opposite hand for the pot on the right.) Then the hostess should sit to the left of her husband and the priest should stand facing the north and should sprinkle water (abhishek) on the host and hostess of the ceremony and the one on whom the sanskar is being performed with five types of foliages and a sacred grass (durva), amidst chanting of mantras. Consequently, the energy generated in the pot is transmitted to all. Finally the host should sip water from the palm twice (achaman). This marks the end of the ritual.

B. The ritual of worship (puja): Twenty-seven small heaps of rice should be made and a betelnut should be placed on top of each one of them. Ritualistic worship is performed as usual and then water is released to mark the end of the ritual.

A. The objectives: The Nandishraddha is performed as an offering to the ancestors and their deities (Nandimukh and others) just as Lord Ganesh is worshipped before commencing any auspicious ceremony to ward off any obstacle.

B. Preparations: In Nandishraddha (Vruddhishraddha) instead of one sacred grass (darbha), another (durva) is used. However, if the shraddha is a part of the rite of a sacrificial fire (yadnya) then grass without roots or a combination of both the sacred grasses (durva and darbha) is used. Substances which have the ability to attract pure particles of spiritual energy (pavitrakas) of a deity are used in the ritualistic worship (puja) of that particular deity.

C. The ritual: The worship is performed with five substances namely sandalwood paste (gandha), consecrated rice (akshata), flowers, incense and a lit lamp and then some money (dakshina) is offered in a circular, shelving metal dish (tamhan). One copper coin (paisa) is thrown towards the south as an offering to the ancestors in the region of ancestors (pitrulok) situated in the south and to the distressing energies from that direction so that they do not cause trouble. Another copper coin is thrown towards the north as an offering to benevolent deities.

A. The objectives: Accepting the priest (purohit) in order to perform any ritual.

B. The ingredients required: White mustard seeds, a mixture of milk, curd, butter, urine and dung of cow (panchagavya) and a betelnut.

C. The ritual: The betelnut is offered to the priest after the chanting of a mantra and he is requested to be the officiating priest. The priest then saying ‘yes’ accepts the proposal.

D. Sprinkling the ingredients with holy water (prokshan): The ingredients required for the ritual and the place where the ritual is to be performed is sprinkled with a mixture of the five substances mentioned above (panchagavya) using sacred grass (durva or darbha). Also, to prevent spirits from causing any trouble mustard seeds are scattered in all four directions.