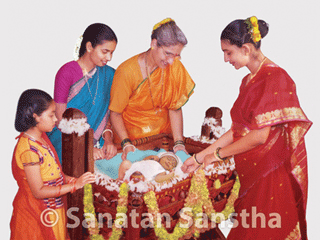 To eliminate the defects in the foetus arising from intake of liquor (amniotic fluid) and to liberate the father who has glanced at the son’s face, from the three debts (to the ancestors, to the sages and to the deities) as well as the debt to society. When in the womb the liquor enters the foetus through the mouth. Since intake of liquor is forbidden, partaking it is considered to be a sin.

As soon as a son is born, the father should glance at his face and then bathe facing the north. After donning clean attire he should apply sandalwood paste (gandha) to himself. Then before cutting the umbilical cord, the baby who is untouched by anyone except the midwife, who has not suckled the mother’s breast and has been bathed is placed facing the east onto his mother’s lap, by the father.

‘I am performing this sanskar of Jatakarma (birth) so that this son of mine is freed from all defects from the time of conception including the intake of amniotic fluid, and is granted a long life, spiritual intellect (medha) and so that he may acquire the grace of The Lord. I am also performing worship of Lord Ganapati, Punyahavachan, Matrukapujan (worship of Matruka deities) and Nandishraddha which are a part of it.’

There is no restriction of maintaining seclusion after a birth (soyar) in the family, only for this sanskar (rite). After completing the rituals right from worship of Lord Ganapati to Nandishraddha the mantra with the following meaning is chanted: ‘O beloved son, I am feeding you with honey and clarified butter (ghee) for the first time. May The Almighty bless you with knowledge, food and wealth. May He protect you always and bestow you with a lifespan of a hundred years’. One should then feed the infant a mixture of honey and clarified butter with a gold coin, wash the coin and place it in the baby’s right ear. Then drawing one’s mouth towards that of the son, the father should chant the verse, ‘ॐ मेधाते देव:० ।’ which means, ‘O beloved son, may The Lord bestow you with sharp acumen and intellect to study the Vedas. May the Ashvini deities who support the pran and apan vital energies and the others like Som (Moon) bestow you with perfect intellect’. Then replacing the same coin in the baby’s left ear the same verse, ‘Om medhate devaha (ॐ मेधाते देव:० ।).’ should be repeated. Gold has greater ability to both absorb and transmit frequencies than any other metal. Thereafter, chanting a mantra the father should sniff the child’s head thrice, and decide in his mind what the child should be named. When in the womb the baby’s Brahmarandhra is closed. When the father sniffs the head, it opens. Sometimes instead of sniffing the head the father exhales at the site of the Brahmarandhra, thrice . That too bestows the same benefit. However, it occurs only if the father is of a sattvik (sattva predominant) temperament. Then the mother’s right breast is washed and after chanting a mantra the mother holds the baby to her breast. Since the right breast is associated with the Pingala or Surya nadi (Sun channel), it helps in activating the baby’s right sided channel. Hence the process of digestion of milk commences easily. Nowadays since childbirth occurs in maternity hospitals one cannot perform the sanskar of Jatakarma there. Therefore it is often done along with the rite of Namakaran (naming).

This sanskar is performed for longevity and prosperity in worldly life.

2.2 The resolve (sankalpa) and the ritual

This sanskar is performed on the twelfth or thirteenth day of birth. Placing the baby in the cradle (palakharohan) constitutes an important ritual, in this rite. The resolve expressed that day is ‘I am performing this sanskar (rite) of Namakaran (naming) to wipe off any sin generated from the ovum and foetus, to prolong the lifespan, so that the child achieves success in all activities and to acquire the grace of The Supreme Lord. I am performing the worship of Lord Ganapati, Punyahavachan, the worship of the Matruka deities (Matrukapujan) and Nandishraddha which are incorporated in it’.

2.3 Selection of the name

2.5 Astrology and the name

Just as a child’s sex is decided in the womb, so is its name. A sound, touch, form, taste and odour coexist. Hence a child’s name corresponds to its appearance. Only one is unaware of it. Only the spiritually evolved know the matching name. If one cannot get advice from a spiritually evolved person the science of astrology can give guidance on the suitability of the name.

2.6 The ritual and the four types of naming

The host of the ritual should address the priest, ‘O priest, I am naming the child …..’, thrice. Then the priest should convey his approval saying, ‘Name him ….’. The consent given by a saintly priest helps the name and form of the child to blend with each other.

2.7 The naming of a daughter

The naming of a daughter is done without chanting mantras while that of a son is done with them. The reason for this is that if the naming of the daughter is performed amidst chanting of mantras then there is a 5% chance of her being afflicted with problems. The main problem is the untoward effect on the ovaries. [Refer ‘Science of Spirituality: Chapter 9 – Path of Chanting The Lord’s Name (Namasankirtanyoga) point – Prefixing Shri or Om to the Name’.]

3. Nishkraman (The rite of taking the child out of the house)

The motive behind this sanskar (rite) is to increase the lifespan and wealth.

This sanskar is performed in the third month after birth on the same date as the date of birth or the lunar asterism at birth. In the fourth month the baby is made to look at fire, a cow and the moon at an auspicious time.

‘I am performing this sanskar of Nishkraman (taking the child out of the house) to win over The Lord’s grace so as to increase my child’s lifespan, for acquisition of wealth that is, Lakshmi (Shri) and to overcome the defects generated from the ovum and foetus’.

The benevolent deities (ishtadevatas) should be worshipped with sandalwood paste (gandha), consecrated rice (akshata), flowers, etc. After chanting a mantra, the father and the other relatives should hold the child on their laps. A prayer should be made to The Almighty for the child’s longevity as follows: ‘I am giving the custody of this child unto the moon, the sun, the guardians of the eight directions (dikpal), the eight directions and the sky. So please protect him. Whether the child is vigilant or not protect him by day and by night. May the deities such as Lord Indra perpetually protect him.’

After this, one should worship Lord Mahadev or Vishnu by going to Their respective temples or in the house of any well-wisher. Then the child should be placed in a sitting posture on a heap of rice and other food grains, spread on the floor smeared with cowdung. After chanting a mantra the head and forehead of the child should be sprinkled (prokshan) with holy ash (bhasma) or consecrated rice. This should be followed by worship of deities like Lord Mahadev, Ganesh, etc. with sweets like anarase, etc. The child should then be given some sweetmeats and placed in front of God in the prone position and then brought home.

This sanskar (rite) eliminates the defects generated by swallowing urine and faeces when in the mother’s womb.

‘I am performing this sanskar of Annaprashan to win the grace of The Supreme Lord for the destruction of defects acquired by the intake of faeces by the baby when in the mother’s womb, the acquisition of pure food, etc., the acquisition of divine splendour (effulgence), the perfect development of the organs, longevity and to overcome the sins committed by the foetus. I am performing the worship of Lord Ganesh and the Matruka deities, Svastivachan, and Nandishraddha along with it.’

After expressing the resolve the child should be placed to one’s right on a white cloth placed on the mother’s lap, in front of the deity. The child should face the east and should then be fed solid food for the first time. Food containing curd, honey and clarified butter (ghee) should be put in a gold or bronze vessel and the following prayer should be made ‘O God, the presiding deity of food, give us food which promotes health and bestows strength’. Then wearing some gold ornament on the hand one should give the child the first mouthful of solid food. After the child has had its fill, its mouth should be washed and then it should be placed on the ground.

4.5 The test of earning a livelihood

To test the choice of a livelihood, books, instruments, clothes and other tools which sculpt the future should be placed in front of the child. The object touched by the child as the first choice may be considered as the means of his earning a livelihood.

5. Choulkarma [Chudakarma (The rite of keeping a small portion of hair on the front of the head)]

This sanskar (rite) is performed in order to attain longevity, strength and radiance. The small portion of hair facilitates the entry of the sattva frequencies from the universe through the Brahmarandhra. It functions like the antenna of a television set. [Refer ‘Science of Spirituality : Chapter 38 – Path of Activation of Spiritual Energy (Kundaliniyoga)’.]

It is customary to perform this rite either in the third, fourth or fifth year of a child after choosing an auspicious time. Nowadays, however it is often performed along with the thread ceremony.

‘I am performing the sanskar choul (the rite of keeping a small portion of hair on the front of the head) in order to win the grace of The Lord so as to acquire pure food, for attaining longevity, to increase oja (precursor of divine energy) and strength and also to nullify the sins generated by the ovum and foetus. Along with it, I am performing the worship of Lord Ganapati, Punyahavachan, worship of the Matruka deities and Nandishraddha.’

This is also known as the first haircut. This is customarily performed when the child is about one year old. Only some hair in front of the head is retained. The importance of keeping a small portion of hair will be clarified by point ‘5.1 The objectives’.