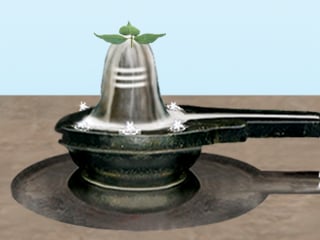 Shiva’s idol underwent changes, with the passage of time as given below.

1. Form of the phallus

2. In the form of an animal

Nandi is the form of Shiva from the Vedic period.

This form was created during the Puranic period. Here Parvati is depicted as seated on Shiva’s lap. It symbolises that Shiva-Parvati [Divine Energy (Shakti) are the parents of the universe. This idol is always white, that is like camphor (karpur) and is named Karpurgour. Shiva being the deity of purity, the idol is white in colour as a representation of this absolute purity. This human form of Shiva possesses the following four symbolic instruments in his hands.

A. The small hourglass shaped drum (damaru): This represents the Brahman in the form of the word (shabda Brahman). Alphabets consisting of the sounds of fifty-two basic letters and the forms of fourteen Maheshvar verses (sutras) have generated from it. Later the universe was created from it.

B. The trident: It represents the following

D. The axe: This represents the destruction of ignorance.

‘The word dakshina represents intellect. “Dakshinamurti” is that form of The Lord the realisation of which one acquires with the help of the right intellect. A legend says that Shiva assumed this form to be able to preach philosophy to His devotees, constantly. The Dakshinamurti idol too exists in four forms – Vinadhar, Yoga, Dnyan and Vyakhyan.

‘In this form Shiva is either in the standing or in the sitting posture. His countenance is pleasant and beautiful. He possesses four arms. Often several animals, serpents, yatis and sages surround this idol. At times Parvati too is close by. Shankaracharya has composed two verses (stotras) of Dakshinamurti.

This idol depicts the wedding ceremony of Shiva and Parvati.’

The divine birth passage and the divine phallus are the two sex organs responsible for animate creation. Realising this, primitive man worshipped both these organs. The pindi was created by union of the base of the linga (shalunka) representing the divine birth passage and the linga representing the divine phallus. The earth means procreation and Shiva means purity. Although the shalunka has both creation and purity yet the universe was not created from semen but by the resolve (sankalpa) of Lord Shiva. Thus Shiva and Parvati became the parents of the world. Huishka, the son of Kanishka began worship of Shiva’s linga since the second century. The concept of the Shivalinga originated after the union of the Shiva and Shakti (Divine Energy) sects. Shiva cannot do anything without Divine Energy (Shakti) hence the worship of Shakti commenced along with that of Shiva. Shiva’s linga in the form of a pindi represents the energy of effulgence. The modern nuclear reactors too are shaped like the lingas of Shiva.

A. Chal and achal: A chal linga is created for a certain ritualistic worship (puja). This is created like an idol of Ganesh made for Ganesh Chaturthi and is then immersed. An achal linga is installed in one place and not moved.

B. With context to the ground

Bhumi (Earth) is the eldest daughter of Daksha Prajapati . Aditi, Uttanpada, Mahi and Shalunka are its forms. The root name of the shalunka is Suvarnashankhini because the sex organs of a woman resemble a conch (and a seashell) in shape. Ritualistic worship of the shalunka implies the worship of the mother deity (matrudevata). The grooves located on the inner aspect of the shalunka are important. Due to them the sattvik (sattva predominant) energy generated in the pindi mostly remains in the pindi and in the central part of the temple (gabhara) while the destructive tama predominant energy constitutes the outflow (srot) from the shalunka. A. Types of shalunkas based on the circumference

B. Height: The height of a linga should be equivalent to that of its Vishnu part.

If the shalunka faces northwards then its shape resembles the figure below. Sperms and golden coloured adhahashayi (the embodied soul (jiva) which enters the foetus) (अध:शायी) (refer ‘Science of Spirituality: Chapter 24 – Creation of the Universe’) as well as neonates resemble it. 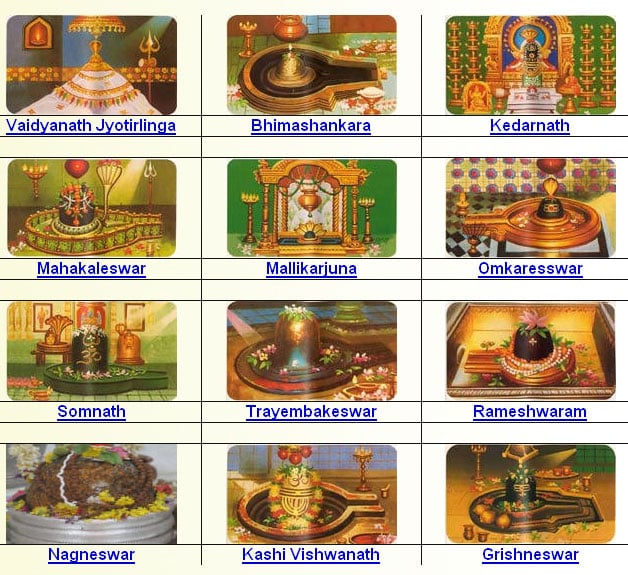 The twelve jyotirlingas are bodies the heads of which lie at Pashupatinath of Kathamandu. For acquisition of the supernatural power of a rudraksha one should choose the linga with the required quality and energy and worship it by sprinkling with water (abhishek). For example, Mahankal contains tamasi (tama predominant) energy, Nagnath is a form of Hari (Vishnu) and Har (Shiva) and is predominant in sattva and tama components, Tryambakeshvar is composed of the three components (Avadhut) while Somnath is appropriate for alleviating disease.

The meaning of a jyotirlinga

These are a type of Shivalingas. A particular kind of pebbles from the bed of the Narmada river is referred to as banalingas. Banasur had created these lingas for ritualistic worship and then left them on the mountain situated on the banks of the Narmada. The Yadnyavalkyasanhita states that along with the water currents these lingas reached the Narmada. Akin to the Narmada banalingas are also found in the rivers Ganga and Yamuna.’ Since banalingas and shaligrams of Lord Vishnu are made of non-porous stone like marble they are both heavy and do not erode easily.

4.6 Lingas according to the era (yug)

The following table gives information on the Names of the faces in the five-faced Shiva, the associated elements, the direction of the face, special features and their implied meaning.

6. The Shivalinga with five faces

Shivalingas with five faces are also found in some places. The Names of the five faces are- Sadyojat, Vamdev, Aghor, Tatpurush and Îshan. The four faces of Lord Brahma represent knowledge of 1. creation, 2. sustenance, 3. dissolution and 4. spiritual experiences. The four faces of Shiva represent the four directions. The fifth face which points skywards is the universal face symbolic of purity and spiritual progress.

8. Lingas of the five cosmic elements

9. The hundred and eight and the thousand lingas

These lingas are created by vertical and horizontal lines engraved on the Rudra part creating one hundred and eight or a thousand squares respectively.

This is created by drawing 5 to 28 deep vertical grooves on the Vishnu part of the linga. Because of these grooves water from the ritualistic bathing (abhishek) flows down easily.