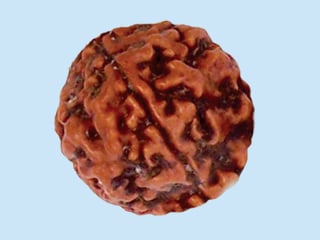 1. Definition and meaning of the word Rudraksha

3. The rudraksha (fruit of the rudra tree)

5. The function of rudraksha

Adorning a rudraksha-mala while worshipping Shiva is ideal. Followers of the Natha and Vama sects and Kapaliks especially use the rudraksha.

1. Definition and meaning of the word Rudraksha

The word rudraksha is derived from two words – rudra (रुद्र) and aksha (अक्ष).

A. Aksha means eye. Rudra and aksha means the one who is capable of looking at and doing everything (for example, the third eye). Aksha also means axis. Since the eye can rotate on one axis, it too is known as aksha.

A. Creation of the rudraksha tree from the tears of grief shed by Shankar (or Shiva) upon seeing the unrighteous conduct of demon Tarakasur’s sons, and their destruction by Shiva

Through their righteous conduct and devotion unto Shiva, Tarakasur’s sons Tadinmali, Tarakaksh and Kamalaksh, attained divinity. After some time, seeing that they have returned to their original unrighteous conduct, Shankar was grief-stricken, and His eyes were filled with tears. A few of these tears fell onto the earth; a tree sprang up from these, which came to be known as the rudraksha tree. Later, Shiva destroyed the sons of Tarakasur. – Gurudev Dr. Kateswamiji

B. General information on rudraksha tree

This is found at a height or depth of three thousand meters above or below sea level. The rudraksha tree grows in a narrow opening, not on plain ground. Its leaves resemble those of tamarind or nux vomica, but are longer. It yields one to two thousand fruits annually. The Yatis (Ascetics) in the Himalayas survive only on these fruits. These fruits are also known as amrutphal (Fruits of nectar). They satisfy thirst.

3. The rudraksha (fruit of the rudra tree)

Its fruits ripen on the tree and drop from it during winter. Then its seeds dry up. Each fruit has fifteen to sixteen seeds (that is, rudrakshas). The more the seeds, the smaller is their size and the less is their price. Instead of using a small rudraksha alone, many small rudrakshas are strung together with one large rudraksha. A rudraksha has a natural opening from one side to the other; it need not be created. This opening throughout its diameter is known as vahini (A channel). Rudraksha is reddish in colour, with yellow stripes and is flat like a fish. On one side it has an open mouth. A rudraksha having more than 10 openings is called a Maharudra.

Rudraksha takes the radiance from the atmosphere and converts it into oil. If we chant ‘Om Namaha Shivaya’ sitting under a rudraksha tree, fragrant oil will emanate from a rudraksha for 24 hours. This oil will spill out if we blow into the hollow of the rudraksha. The oil of rudraksha has a pleasant odour. This oil is extracted from its tree too. Once the rudraksha is made effective, it emits air instead of oil.

5. The function of rudraksha

A. Transformation of sound waves and light waves

The rudraksha transforms light waves of Deities in the universe into sound waves of the human body and vice versa. As a result, man can absorb waves of Deities and human thoughts can get converted into the language of the Deities.

B. Absorbtion of sama (Sattva) waves

The rudraksha absorbs sama (Sattva) waves. Similarly, sama waves are emitted by its crests. A real rudraksha can be recognised by the vibrations felt upon holding it. At that time, the body absorbs the sama waves emitted by the rudraksha. If a rudraksha is held between the thumb and the ring finger, vibrations will be felt anywhere in the body. Even if kept nearby, the effect of a rudraksha is felt up to half an hour. Thus, during that period we are able to perceive vibrations even if any other object is held with the fingers. However, if the hands are washed with water, the vibrations cannot be perceived.

C. Rudraksha-mala can be used for chanting the Name of any Deity

Any Deity’s Name can be chanted by holding a rudraksha.

B. Rudrakshas facilitate the activation of the Kundalini and the occurrence of keval kumbhak in Pranayam.

Its tree resembles a rudraksha tree; but its fruits and seeds are round. Its seeds, known as bhadrakshas, do not have openings, that is, they have no upper and lower ends. Use of bhadrakshas increases the unfavourable waves. Generally, bhadrakshas are sold as rudrakshas. Birds do not eat its fruits and if they do, they perish.

Nowadays, mostly a vikrutaksha is sold as a rudraksha. This is the seed of a type of wild berry. A gypsy tribe in Nepal known as the Gurangs first began using the vikrutaksha. An opening is made in the seed with a hot needle. Similarly, figures like Om, swastik, a conch, a wheel etc. are carved on it with a hot needle. Immersing in water containing catechu dyes it. That is why its colour runs when it is dipped in water.

These are made from sealing wax, wood, plastic etc.

D. Difference between a real and a fake rudraksha

E. A fake rudraksha and Saints

Even if Saints give a rudraksha that is fake externally, with the Chaitanya of the Saint, it gets converted into a real one from within.

A. Heavy and radiant

B. With distinct openings

C. One adorned with auspicious symbols such as an Om, Shivalinga, a swastik etc.

D. The bigger the rudraksha and the smaller the shaligram, the more ideal it is. – Merutantra

F. A rudraksha obtained from a rudraksha tree situated at a great height above the sea level, and for the same tree, one obtained from the top of the tree : Rudrakshas at a greater height are more effective since they receive the Sattva component coming from above in greater proportion.

G. A white colour rudraksha is the best. Rudrakshas of inferior quality in the ascending order are crimson, yellow or black. Generally, white and yellow rudrakshas are uncommon, while red and black ones are common.