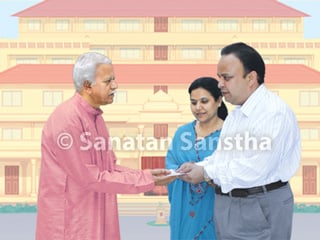 Protecting the society from evildoers and governing the state righteously are the main duties of the Kshatriya.

The Smrutis have not prescribed separate rules for the Vaishya and the Shudra with respect to actions necessary for them. The Vaishyas and Shudras had to change their duties towards the Brahmans depending on the circumstances.

A. Origin and meaning: The word dan (दान) meaning donation or offering has been derived from the verb da (दा) meaning to give.

B. Importance of wealth

C. Attitude about accumulation of wealth: One should consider the wealth obtained as a blessing bestowed by The Lord.

D. Losses due to accumulation of wealth

I. No ego about the offering: To the one who brags about helping others Swami Vivekanand has said, ‘If you feel proud that you have done a favour on a beggar by giving him money then please do not do so, because The Lord is capable of protecting and nurturing His devotees even nine kilometres deep in the bed of the Pacific Ocean. If one helps a beggar, one is not doing him a favour, instead one is benefitting from him, rather doing a favour on oneself by getting a chance to make a sacrifice.’

J. Asking back what is offered: One cannot ask someone to return what one has offered him. However an exception to this is if the offering has been made in a fit of anger, out of frustration or insanity.

Spiritual practice of a Vaishya (businessman) should not be merely by offering wealth. It should also include service with the body like a Shudra (labourer).

4. Earning a livelihood by Vaishya class

Wealth is earned by rearing cattle, agriculture and trade. The Vaishyas were prohibited from trading in honey, meat, iron and leather.

They can adopt the means of livelihood of a Shudra (Gautam Dharmasutra).

‘A Shudra was permitted to undertake any profession other than those of a Brahman (priest) and a Kshatriya (warrior). He was not prohibited from eating any food item or drinking liquor. He was also not compelled to perform the day-to-day actions (ahnik karma). Spiritual rites (sanskars) were also not compulsory for him. He did not have to observe the restrictions of the lineage (gotrapravar) to get married. He did not have to undertake atonement for violating scriptural rules.’ (2)

As the intellectual level of a Shudra is rather low it would be difficult for him to understand the rules of Righteousness and follow them. Hence as spiritual practice service is prescribed for him.

A Shudra neither possesses sharp intellect nor wealth hence he can serve The Lord only with his body. This amounts to offering of the body. Along with service he also offers his time. Physical service can be done by cleaning temples, hermitages (ashrams), etc., preparing the holy sacrament (prasad) to be given to the people gathered for functions there, doing menial chores such as chopping vegetables, washing utensils, etc. during religious festivals or bhandaras (festivals of distributing food for a spiritual purpose) so also by putting up posters and banners to announce a spiritual discourse. Service causes a rapid reduction in ‘ego’ and brings about rapid spiritual progress. It is because of this service that from the spiritual point of view a Shudra (labourer) is superior to a Brahman (priest).

‘The specific duty of a Shudra is to serve the three classes of the Brahman, Kshatriya (warrior) and Vaishya (businessman) and procure the things required for his livelihood from them. For the lowest class that is the Shudra, service without expectation (nishkam) can lead to attainment of the Final Liberation (Moksha). According to the Apastamba Dharmasutra 1.1.1.7/8 when serving the various classes a Shudra derives more happiness by serving a Brahman than by serving a Kshatriya which gives greater happiness than serving a Vaishya (शुश्रूषा शूद्रस्‍येतरेषां वर्णानाम्‌ । पूर्वस्‍मिन्‌ पूर्वस्‍मिन्‍वर्णे नि:श्रेयसं भूय: । -आपस्‍तंब धर्मसूत्र १.१.१.७/८). Service of the other classes (varna) that is Vaishya, Kshatriya and Brahman itself is the duty of the Shudra. The Shudra attains the Final Liberation through service just as the Brahman attains it through knowledge and detachment.

Sage Gautam has said that if a Shudra ages serving a person belonging to a high class and becomes incapable of working then his former master should look after his needs (Gautam Dharmasutra 10-63).

7.1 Earning a livelihood in adverse times

Even during adverse times a Shudra should not adopt a profession of the higher classes.