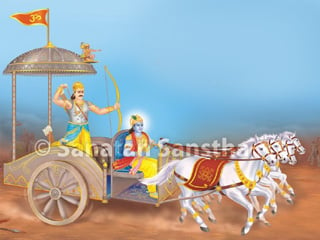 1. Definition of the four classes (Chaturvarnya)

The social system created to assist everyone in society to behave based on his natural temperament, that is the constitution composed of the three components (triguns) and his spiritual evolution is the system of the four classes (chaturvarnya). In other words, this system of four classes incorporated in Righteousness (Dharma) is meant to provide guidance with regard to behaviour and spiritual practice to be undertaken in accordance with qualifications, that is potential and requirement, so as to acquire Bliss.

2. Animals and the four classes

The system of four classes is observed not only in man but also among flora and fauna. Among animals the cow and serpent who are sattvik (sattva predominant) belong to the Brahman class while the tiger and lion who are rajasik (raja predominant) in nature belong to the Kshatriya class. This means that a class is a state which is determined by the three components (guns).

3. Society and the four classes

‘A group of people which lacks study and preaching, lucrative transactions and service and fails to protect its people is not deserving of this description of society.’ (1) This means that society certainly has four types of individuals and four classes.

A. ‘The creation of the classes described by authors of the Smrutis is based on division of labour. They were meant to strike a balance between various societal groups without leading to any rift between them. In that system of classes rather than the rights and privileges of the different classes emphasis was laid on the performance of duties.’ (2)

B. ‘In any family on the basis of genetics generally the children resemble the parents with regard to the complexion, temperament, intelligence, etc. Considering this as the foundation, authors of the Smrutis such as Manu laid down the rules for constituting the societal pattern. Manu came across different people with qualities required for a particular task in a particular social setup and believed the qualities to be inherited. He then allotted the responsibility of different tasks beneficial to society to those particular classes.’ (3)

D. Each one is born in a particular class depending on his potential to practise Spirituality or according to his need for that particular spiritual practice. The Lord’s motive behind establishing this system of four classes was for man to re-enter the Hansa class (refer point ‘The period preceding the Satyayug’) after he had fulfilled the obligations of all the four classes. This means that the restrictions of the four classes imposed by The Lord are in fact meant to destroy the four classes. The same point has been emphasised in the Shri Eknathi Bhagvat (20.314, 21.209-210).

A. Psychologically one: Mentally all the four classes are close to each other because they are all parts of the same Universal Being (Virat Purush). The Purushsukta states that the Brahman (priest) was created from the face, the Kshatriya (warrior) from the arms, the Vaishya (businessman) from the chest and the Shudra (labourer) from the legs of the Universal Being.

Variant meaning: The face of the Universal Being is the Brahman, the arms are the Kshatriya, the chest is the Vaishya and the legs are the Shudra.

B. Different worldly duties: The worldly duties of every class are different, e.g. imparting knowledge is the duty of the Brahman.

C. Equality in terms of attaining Brahman (God): Manu has preached that all have an equal right to realise Brahman. This will be explained by the verse (shloka) below as –

Meaning: Manu says that non-violence, truth, not committing theft, external and internal purity and control over the sense organs is the common code of Righteousness for people of all the four classes. – Manusmruti 10.63

6. Creation of the four classes

6.1 The three components, four aspects of Righteousness and the yugs (eras)

A. The period preceding the Satyayug: During those days there was only one class – the Hansa class, the four classes did not exist then. Hansa also means the soul. All the people from that period were engrossed in the spiritual experience of Self-realisation. They were not even aware of the state of Self-realisation. Even if they did descend from the nirvikalpa superconscious state (samadhi) they would descend at the most to the state where they harboured the spiritual emotion that ‘He (God) is I (so’ham)’.

1. The yugs and the four aspects of Righteousness

6.2 Creation according to the doctrine of evolution

A. The Shudra (labourer): According to the doctrine of evolution protection of the body is the basic impression. All are Shudras at birth because they are born with the impression that ‘I am the body (जन्‍मात्‌ जायते शूद्र: ।)’. It is said that ‘Shudras have no right to study the Vedas’ because Shudras (those who are concerned about their bodies) cannot think beyond their bodies. Their further progress depends on the proportion of the impressions (sanskar) of a Shudra on the embodied soul.

B. The Vaishya (businessman): With further evolution that individual begins to be concerned with nurturing his family and thus commences doing agriculture, business, etc.

C. The Kshatriya (warrior): With further evolution one begins to develop an affinity for a territory. This leads to the generation of the Kshatriya class. Now the affinity is for the country and not for one’s body hence patriots sacrifice even their lives for the country.

D. The Brahman (priest): In the final stage of evolution one becomes curious about The Lord and spiritual knowledge. This leads to the origin of the Brahman class.

‘Different classes (varna) did not exist in the Vedic period but according to Mahamahopadyay P.V. Kane during that period there were different groups. Performing sacrificial fires, imparting knowledge and priesthood were the tasks of the Brahman group and administration and protection of the people were those of the Kshatriya group. Vaishyas were common people undertaking activities like commerce, farming, etc. Those indulging in menial labour and service were Shudras. In this way though societal groups were created based on actions (karma) yet any individual could perform whatever task he wished according to his liking.

Gradually as time elapsed Brahmans, Kshatriyas, Vaishyas and Shudras began to be categorised into four classes. During the period of the Taittiriya Sanhita and the Brahman holy texts the relationship between the three the Brahman, Kshatriya and Vaishya classes was decided. Initially there was no discrimination between the three classes however gradually the concept that Brahmans (priests) were superior to the others developed. This practice was followed by the Kshatriyas (warriors). They began to feel that if Brahmans were superior because of their knowledge of the Vedas and fire sacrifices then they as Kshatriya kings were also superior because they protected and looked after the subjects. Thereafter these two classes began to quarrel over the issue of superiority. The conflict between Vasishtha and Vishvamitra and Kartavirya and Jamadagni was of this nature. Nevertheless since society benefitted equally from both and since they were interdependent the Shatpath Brahman (5.4.4.5) says that both should co-operate with each other. In those days men and women belonging to all classes were eligible to study the Vedas and to perform fire sacrifices.

In the post-Vedic period fire sacrifices and other rituals became so cumbersome that the stage of ritualistic worship (karmakand) assumed tremendous importance. Consequently some scholars created the Upanishads. They explained the philosophies of Brahman, the soul (atma) and The Supreme Soul (Paramatma). These Upanishads are predominantly written by Kshatriyas. Brahmans considered them as their Gurus and acquired knowledge of Brahman (God) from them. It is well-known that King Janak of Mithila had realised Brahman and that Yadnyavalkya acquired spiritual knowledge from Him.

7.3 System of classes determined by birth

The reactions to the status higher than the Brahmans being accorded to the Kshatriyas during the Buddhist social system are evident in the period of the Sutras. Authors of various Sutras however have considered the Brahman class as the highest. It was during this period of the Sutras that the system of classes came to be determined by birth. Even if the scriptures permitted a Brahman or a Kshatriya to undertake the jobs of a Vaishya (businessman) his class would not change. Even though the holy texts such as the Mahabharat and the Ramayan stated that the class was determined by components (gun) and actions (karma) of an individual yet in reality this was not so. Despite Karna being a great warrior he was not accorded the status of a Kshatriya. Dron, Krup, Ashvatthama and Parshuram remained Brahmans inspite of accepting the code of Righteousness of a warrior (kshatradharma). Manu clearly states that birth and not actions determines the class of a person (Manusmruti 10.5).’ (9)