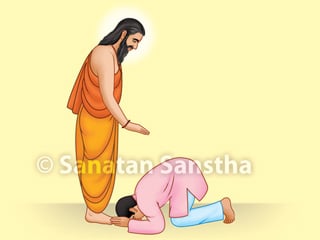 1. Actual spiritual practice according to the class

B. In the present times of the Kaliyug every person, to whichever class he may belong becomes a Brahman, Kshatriya, Vaishya and Shudra for some time of the day, as given in the table below.

C. The origin of the system of the four classes dates back to thousands of years ago. Since then till the present period nearly 70% of the population has been born of interclass marriages. For this reason too, each one needs to undertake spiritual practice of all the four classes for at least some time.

D. An individual is born in the class which is conducive for his spiritual progress. Hence, if a Shudra is rich as a result of his merits from previous births, his thinking that, ‘I will practise Spirituality by offering my wealth like a Vaishya’ is wrong. He must certainly offer his wealth, but according to his class he should also do physical service. As a result of performing service of both classes, instead of being born as a Vaishya (businessman) he may directly be born in a Kshatriya (warrior) or Brahman (priest) class, in his next birth.

E. If one undertakes the spiritual practice of one’s class appropriately and completely then in the next birth one is born in a higher class, e.g. if in this birth the spiritual practice of a Shudra is completed then in the next birth one may be born as a Vaishya. Later being born progressively as a Kshatriya and a Brahman one may ultimately attain the Final Liberation.

2. Comparison of the four classes

*     Pan – An ancient coin with a value equivalent to eighty cowries.

3. Determination of the class

3.1 Difficulties in determination of the class

One has to be beyond the three components (gunatit) to recognise the qualities (gun) and actions (karma) of another. Only saints can do this but They too do not answer such queries and only recommend the appropriate spiritual practice.

3.2 Qualities are more important than the birth

Meaning: An individual should be classified in a particular class (varna) irrespective of his birth if he possesses the decisive characteristic of that class. One’s class should be decided considering the holistic picture of the qualities of the class of the person and those of the other classes. – Shrimadbhagvat 7.21.35

The Mahabharat says that an individual’s class should be determined by birth but in accordance with his qualities and only if he possesses those qualities should he be considered to belong to that particular class.

‘Discussing on the system of classes in the Mahabharat Dr. P.G. Sahasrabuddhe has concluded that though they considered the class by birth they did not judge the potential by birth. They did not even vaguely speak of a concept from the Manusmruti which is deleterious to the welfare of the society that a Brahman (priest) should be held in high esteem only because of his birth even if he were to abandon his duties. In the ancient times the Shudras (labourers) too could study the Vedas and could adopt the stage of the renunciant (sannyasi). The 63rd adhyay (chapter) of the Shantiparva recommends all the four stages of life (ashrams) even to the Shudra who has become pure (free from sin) with his own actions.’ (1)

3.3 The role played by castes in deciding the class (varna)

Due to the difficulty in deciding the class of a person castes began to gain importance. Consequently the authors of the Smrutis began to say that like the class the caste too is determined by birth. After the period of the Sutras the class began to be determined based on the birth. It is not possible for the common man to become a Brahman with the prowess of penance like Sage Vishvamitra. Hence a rule was laid down in the interest of maintaining happiness in society that caste should be decided by birth. The restrictions of class and caste have to be followed till Self-realisation is attained; thereafter one has to preach only about the classes and stages of life is what the authors of the Smrutis write.

3.4 It is important to decide whose class (varna) is being decided

‘Question: Is the class to be decided by birth or by action?

Shri Gulabrav Maharaj: Of the common man by birth and of sages by action (karma). Those who have transcended the awareness of the body and harbour the spiritual emotion of “He is I (so’ham)” are beyond the classes.’ – Sadhubodh page 167

4. Change in the class

According to the influence of the yug (era) every Kshatriya (warrior) who adopted the code of conduct of a Brahman (priest) eventually became one. All their descendants became Brahmans. Some of them became the proponents of the science of Yoga and others even wrote holy texts such as the Sanhitas. Some examples of a change in the class are as follows. A Brahman dynasty started from Gargya, son of Manyu when he accepted the code of conduct of a Brahman. Similarly all the three sons of King Duritakshay became Brahmans. Priyamedh and other sons of King Ajamel also became Brahmans. All of them were princes and their fathers were evolved souls. The king is considered as an embodiment of Lord Vishnu. The ancient kings would look after their subjects with compassion just like Lord Vishnu. Should the need arise they were even prepared to sacrifice their lives for the happiness of their subjects. They believed that that itself was the king’s greatest duty. Kshatriyas transformed into Brahmans were the sons of such kings (Chapter 22, skandha 9 of Shrimadbhagvat). Vedic literature gives an account of people such as Nabhanedishtha, Bhalandan and Vatsapri who were born Vaishyas (businessmen) and then became Brahmans. The Mahabharat says, ‘Even a chaste Shudra (labourer) can become a Brahman with his qualities and actions. A Brahman who does not perform any actions is inferior even to a Shudra’. ‘During those times sages and the Brahman community accepted them. This is called the influence of the yug.

However no one in the Kaliyug has the right to do such a thing. The class and caste are to be determined by birth itself. Sut has preached Purans such as the Shrimadbhagvat, etc. to sages like Shaunak. Sut’s father was a Brahman and His mother a Kshatriya. Sut called Himself a Shudra despite His being so evolved because He was born of a mother whose class was lower than that of His father. Nevertheless he was a close disciple of Shri Shukacharya and had received the mantle of His grace. The progeny being born of a father of a higher or lower class than his spouse are called anulom and pratilom respectively. They are not considered righteous. Yet all such progeny were entitled to realise God; because if Sut was not Self-realised then Shukacharya would never have accepted him as a close disciple.’ – H.H. Kane Maharaj, Narayangaon, Maharashtra

5. Those excluded from the four classes

This refers to the class of people ouside the four classes.

A. According to Manu

B. According to the Gurucharitra

5.3 One kind of those outside the classes – demons

‘In the Tretayug another class distinct from the four classes was created. This dreadful class was of the demons (asur, rakshas). However they are not referred to as a class (varna) because it would be demeaning to the terminology of class. Hence they are simply known as demons. These demons were so terrorising that they made all the subjects unhappy. They were not in the least concerned about spiritual progress and acquiring spiritual knowledge. They were ego, vanity, pride, anger, hypocrisy, egoism and desire personified. Their numbers swelled rapidly. The Brahmans (priests) allotted the task of destroying the demons to the Kshatriyas (warriors).’ (2)