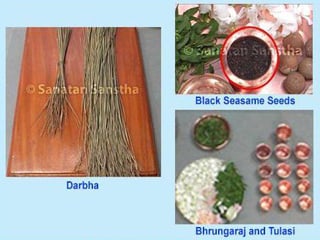 Darbha is a very important component in the shraddha ritual. Darbha generates radiance (Tej). When Darbha is used in the shraddha ritual, by the influence of the frequencies of Tej emitted by Darbha, the interference of raja-tama particles in each ritual of the shraddha is reduced. The deceased ancestors (Pitars) absorb the energy of a specific level from the ritual.

1.1 Effect of the use of Darbha in the shraddha ritual

The subtle air associated with the Tej particles in the Darbha is activated by the recitation of mantras of the shraddha ritual. This air attains momentum in the upward direction with the help of the Absolute Air Principle of the external atmosphere. With this the resolve made in the shraddha ritual becomes efficacious in lesser time.

1.2 How should the Darbha be selected ?

Do not use the Darbha fallen on the path, kept on the funeral pyre, laid on the ground of sacrificial fire, used as a seat or cover and used for pinda in a shraddha ritual, used in the Brahmayadnya or for the purpose of tarpan. Pluck only green Darbha which is grown on a clean ground. A shloka delineates about the selection of Darbha:

Meaning: For the purpose of shraddha of the Pitars, pluck the Darbha along with its root. The reason for this is that we can gain victory over the Pitruloka with the help of the root of the Darbha.

1.3 Reason underlying the use

of Darbha with roots in the shraddha

The Water Principle-dominant particles of Tej in the Darbha with roots are conducive for disintegration of raja-tama particles. The energy emanating from the actions done with the Darbha with roots touches the subtle sheath of the Pitars in a shorter time. In addition to gaining victory on the Pitruloka, that is, causing disintegration of raja-tama particles at each level of Martyaloka (the subtle region of the dead), the Pitars also get the strength of Tej.

1.4 The reason underlying not plucking

The raja-tama-dominant sound frequencies generated by hitting many times on the Darbha or cutting it with the nails are spread in the Darbha, which reduces the sensitivity associated with sattva of the Darbha. The ability of the Tej Principle-dominant air emitted by the Darbha to move in the upward direction is also reduced. Hence, the proportion of benefit accrued from the shraddha ritual is reduced.

Reciting this mantra, face the north-east direction on the Amavasya of Bhadrapad as per Shaka Samvat or of Ashwin as per Vikram Samvat and say ‘Hum Phat’ and pluck the Darbha.

1.5 The reason underlying placing Darbha if a

Darbha represents all the components of inferior or superior level. Hence, in the absence of any specific component, Darbha can be installed at that place. The inherent Tej particles in the Darbha attract the superior frequencies of the Deities and the inferior frequencies of the Pitars as per requirement and invite them at the venue of the shraddha. The inherent air associated with the Tej Principle in the Darbha is activated by the with-resolve recitation of mantras of the shraddha. This activated Tej Principle is emitted by the Darbha. The negative energies are prohibited by the emitted Tej Principle from coming to the venue of the shraddha and the Pitars are attracted to that venue.

Due to the ability of the Darbha to attract the Principles of superior Deities, it is used as the smallest particles of Divine Consciousness (pavitrak) in each ritual of worship. At that time, according to the invocation made in the shraddha, subtle bodies of particular Pitars are attracted towards these vibrations and enter Earth’s environment. In this process, with help of the raja-tama frequencies emitted from the black sesame seeds, reaching the place of shraddha ritual becomes easier for the subtle bodies of Pitars.

The Desire sheath present around the subtle bodies gets activated due to the frequencies emitted from the black sesame seeds and the Pitars get satiated by partaking their portion of shraddha in air form. In shraddha, water containing black sesame seeds charged with mantras (Tilodaka) has special spiritual importance.

The copper platter contains charged Tilodaka. Money to be offered to the Brahmin, leaf of Bhrungaraj, Sandalwood, flower and beetle nut are placed in it. The momentum of subtle Pitar frequencies increases due to the black sesame seeds in the Tilodaka. As a result, a whirlpool with attraction energy is generated. The subtle body is attracted towards this whirlpool. Thus, the subtle body attracted towards the whirlpool with attraction energy formed from the Pitar frequencies having momentum enters the Earth region. The change occurring at spiritual level during performance of ritual is a feature of spiritual practice of rites, rituals and observances performed at the physical level (Karmakand) prescribed by Hindu Dharma.

After the host pays obeisance to the Dev-brahman and Pitru–brahman, the brahmins bless the host by showering unbroken rice (akshat) on him. Unbroken rice should be used as akshat. In the shraddha ritual barley is also used. White unbroken rice is used if barley is not available.

4. Maka (leaf of Bhrungaraj and Tulasi)

At the time of shraddha some of the Pitars coming to Earth are not satiated. Due to the unsatisfied desires of these Pitars, polluted air or speed of emission of subtle frequencies generated from tamasic object increases. Due to the speed of these frequencies, tamasic energy is generated. Movement of raja–tama particles gains momentum. To restrain this momentum, these two substances, maka, that is, leaf of Bhrungaraj and Tulasi are used.

The Tej frequencies emitted into the atmosphere by Bhrungaraj leaf restrain the momentum of raja-tama particles generated from the unsatisfied desires of the Pitars. The frequencies of Chaitanya of Sri Krushna principle emitted from the Tulasi leaves easily destroy raja-tama particles. Thus Bhrungaraj leaf and Tulasi complement each other in purifying the atmosphere. Due to this purity, entering the place of shraddha becomes easy for the Pitars.