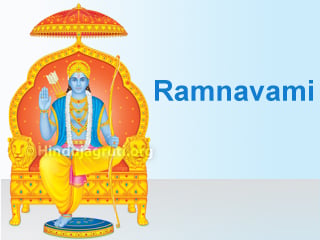 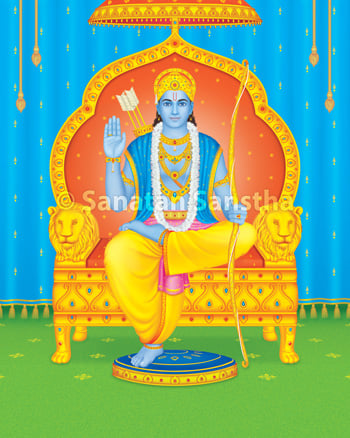 Ramnavami is celebrated to proclaim the birth of Lord Sriram, the seventh incarnation of Lord Vishnu. The 9th day (Navami) in the bright fortnight of the Hindu lunar month of Chaitra is referred to as Ram Navami. On this day, when the five planets and the sun, etc. were in the first house of cancer at noon along with the lunar asterism Pushya, Ramachandra was born in Ayodhya. Several temples of Shriram celebrate this festival for nine days beginning from the first day (pratipada) of Chaitra. It is celebrated by periodic readings (parayans) of the Ramayan, organising spiritual discourses (kirtans) and beautifully embellishing Shriram’s idol. On the ninth day, in the afternoon, a spiritual discourse on Shriram’s birth is held. At noon, a coconut draped in a hooded cloak is placed in a cradle and the cradle is rocked. Devotees shower a red, fragrant powder (gulal) and flowers onto it.

Ramnavami Celebrations start on Gudi padwa, the first day of Chaitra; and continue for 9 days. During this period, devotees do parayans of Ramayan, recite the Ramaraksha stotra, sing bhajans-kirtans in His praise and chant His name.

Hindu Janajagruti Samiti has started Online Signature Campaign to ‘Grant special permission to Hindus for worshipping Shriram at Shriram Janmabhumi on Shriram Navami and fulfil the promise by erecting a grand Shriram Temple in Ayodhya’. We appeal all devout Hindus to participate in the Online Signature Campaign. To sign the petition, please click here

Name : Shriram’s Name was prevalent even before His birth. After His victory at Lanka, that is, upon demonstrating His Godhood, everyone started addressing Him as Srirama (Shriram).

Ideal in All Respects : Shriram is an example of the ideal son, brother, husband, king, friend and enemy.

The Follower of Righteousness (Dharma) : Shriram observed all decorum prescribed by Dharma; that is why He is referred to as ‘Maryadapurushottam’. Also, honouring one’s word (Ekvachani) and needing just one arrow or shot to find the mark (Ekbani) and having only one wife (Ekpatni), when the norm was for Kings of that era to have many wives, are His well-known attributes.

Shriram’s Kingdom (Ramrajya) : During Shriram’s rule, that is, in the Tretayug it was not Shriram alone who was wise, His subjects, too, were prudent. Hence, during His reign not a single complaint was brought to His court.

The real kingdom of Shriram dwells within oneself. The implied meaning of this is absolute control over the five sense organs, five motor organs, mind, subconscious mind, intellect and ego by the Rama principle (Atmarama – the Soul principle).

Once the stage of worship of the Divine principle or Deity according to one’s religion (that of the family Deity for Hindus) is completed, the spiritual practice (worship) of Shriram is useful for many seekers to go from many to One. This is because of Shriram’s attributes of being true to His word, devoted to only one wife and attaining the target with just one arrow.

Since Shriram is an incarnation of Lord Vishnu, He too is worshipped like Vishnu in sixteen steps (shodashopachar puja). Tulsi (a sacred and medicinal plant found in India) leaves are essential for His worship. Tulsi has the ability to attract the subtlest pure particles (pavitrakas) of Vishnu. It is even better if one can use Lotuses for the worship. Khir (a sweet delicacy made from milk and rice or vermicelli) or shira (a sweet delicacy made from semolina, pure ghee and sugar) is Lord Vishnu’s favourite sacrament (naivedya). Choosing the substances offered in the worship according to the science of Spirituality helps generate Divine consciousness (chaitanya) in the idol, so that it aids one’s spiritual progress. 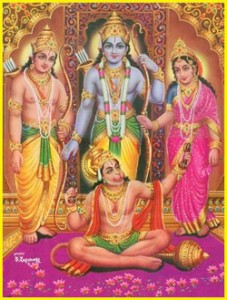 Several temples of Shriram celebrate this festival for nine days, beginning from Gudhipadva (the first day (pratipada) of the month of Chaitra). It is celebrated by periodic readings (parayans) of the Ramayan, organizing and attending spiritual discourses (kirtans) and beautifully embellishing Shriram;s statue. During these nine days, reciting the Ramaraksha prayer (stotra) eleven times daily with a resolve (sankalpa) brings the prayer to fruition, yielding benefits like reduction of speech impairment and other ailments, and gaining prosperity. On the ninth day, that is, on Sriram Navami a spiritual discourse on Shriram’s birth is held in the afternoon. At noon, a coconut, draped in a hooded cloak is placed in a cradle and rocked. The coconut signifies the baby Shriram. A red, fragrant powder (gulal) and flowers are showered onto it. Many places in North India host fairs in connection with the festival, culminating in spectacular fireworks on Rama Navami.

The Ideal son : He always obeyed His parents; at times even advised the elders.

The Ideal brother : Rama-Lakshman’s love is cited as the ideal of brotherly love.

The Ideal husband : He was devoted to His one and only wife. Kings, then, use to have many wives.

The Ideal friend : He helped Sugreev, Bibhishan and many others during their difficult times.

The Ideal King : He followed all codes of conduct for Kings as laid down in our scriptures.

The Ideal Enemy : Bibhishan refused to perform the last rites of Ravan, his brother. Shriram said to him, ”If you do not do it, I will. He was my brother too!”

Maryadapurushottam : He represents the Supreme extent of Righteousness.

He displays emotions of happiness & unhappiness just like humans do. (His melancholy at Sita’s abduction is an example.) Hence, we feel closer to Him than we feel towards other Deities.

The implied meaning of the Ramayana in our lives :

Every Incarnation comes to Earth with a specific purpose : The main task of every Incarnation is to destroy evil and establish the Divine Kingdom; but the percentage and proportion of this varies in different Yugas. And, all activities of the Incarnation are centred around this task.

Killing of Ravana : Ravana was highly learned and possessed the knowledge of Righteousness (Dharma). Shriram had to destroy him, so that He could protect the embodied souls doing spiritual practice. Shriram acquired a gross body to help the souls pursue their spiritual aspirations appropriately.

To set an ideal for the people : Shriram set an example through each and every action of His. He explained how an embodied soul can attain Final Liberation by acting in accord-ance with the scriptures.

He set an example of a Divine Kingdom for the people : When Righteousness (Dharma) manifested in the gross, Unrighteousness (Adharma) also manifested in the gross. Many embodied souls started troubling Sages and others who acted in accordance with the scriptures. During that time Shriram protected the Sages and set an example through His own deeds for all kings as to how a Divine Kingdom should be. Shriram is an ideal of how selfless, free from desire and impartial a King can be!

Why should one chant the Name ‘Sree Ram’ instead of ‘Ram’?

Chant the Names Rama and Sree Rama each for two minutes and record your spiritual experiences, that is note with which Name you feel pleasant or distressed.

What is the real meaning of Ramarajya ?

During His times, that is in the Tretayug Rama alone was not wise, His subjects too were prudent.

Why did Bharat install padukas of Lord Rama on the throne instead of His idol?

With one boon Kaikeyi got Rama banished to the forest for fourteen years and with the other, she asked that Bharat be made the crown prince.

Defamation of Shriram by modern incarnations of Ravan

The website ‘Orkut’ of ‘Google’ company has published pictures of Shriram. The pictures indicate the perverse mentality of the ‘community’ started on the website as they have stooped to a very low level in their display of vile denigration. HJS has therefore, warned the website to immediately withdraw all such ‘communities’.
(Click here for details)

Minelli of Italy painted images of Shriram on shoes made by them and deliberately advertised this aspect. Hindus protested against this denigration and the company was compelled to withdraw their shoes from the market.

See also: The other defamation of Hindu Deities

Ramrajya is the only solution to all the problems. It can only be possible if Hindus wake up and destroy the Modern incarnations of Ravan. The attacks on the Hindu Dharma are growing from the Christians, Muslims, atheists and all other anti-Hindus and yet Hindus are not retaliating. If the condition remains as it is then Hindu Dharma as well as Hindus will become extinct forever. Keep in mind that changes do not occur by big miracles, but acts within the common man’s reach.