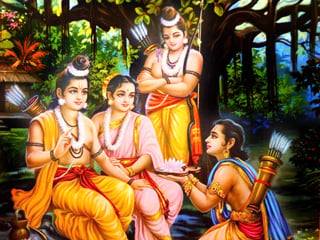 1. Implied meaning of some names in Ramayan

According to His Holiness Anna Karandikar

1A Names in Ramayan and numerology

According to Numerology, the number 3 is closer to number 2. Hence, Lakshman as well as Bharat being 3 letter words, were closer to Ram which is a 2 letter word. Since number 4 is not so close to number 2, there is not much reference of Shatrughna in Ramayan.

1B. Luv : One who bends in whatever direction the wind blows and does not get destroyed; one who can thrive under all circumstances.

1C. Kush : This is a type of grass. Just as grass thrives even on rocks, he is the one who survives even in difficult circumstances. Luv and Kush were princes; yet, they grew up in an Ashram (Hermitage).

1D. The imperishable quiver : The radiance emitting from the sun is reflected back towards the original sun (Sun Principle) in the same amount. Hence, the sun will never perish. Similarly, the number of arrows (meaning ‘Divine Energy’) shot by Ram returned to Him. Hence, His quiver was imperishable.

1E. Shabri : Shabri was conversant with Shabari vidya (An occult science). Under the pretext of eating berries, Ram learnt it from her and she willingly imparted that knowledge to Him.

1F. Marich : The supernatural power by means of which the form of a deer can be assumed is known as maruchi. The one who possesses this power is known as Marich.

1G. The ten-headed Ravan : Ravan means personification of ego. He was ten-headed, that is, a Dashagranthi (A Brahman wellversed in the knowledge of the ten Holy texts). ‘Ravan was the grandson of Sage Pulastya. Sage Pulastya was the manas-putra (Creation) of Deity Brahma. Ravan was the son of Sage Vishrava and Keshini or Kaikasi’. (Shrimadbhagwad, Khanda 16 and Pracheen Namkosha, Page number 358) Pula means the birth passage. This Sage had performed sadhana through Vamamarg (Tantrik spiritual practice).

1H. Bibhishan : According to one school of thought, the jiva is situated above the navel. Due to sadhana (Spiritual practice) when it descends to the region of the Muladhar-chakra, it gets a bhishan (भीषण) (Terrifying) experience near the bimba (बिंब) (Navel). Hence, it is known as Bibhishan. Bibhishan is derived from two words – bhishan (भीषण) and bimba (बिंब). When the order of words is reversed, the word becomes Bibhishan. Bibhishan’s spiritual level, as his name signifies, was up to the Manipur-chakra (See Glossary).

1I. Lanka : Lanka means the head which lies above the neck. Ram handed over the kingdom of Lanka to Bibhishan, which means that He made him progress spiritually up to the level of Sahasrar.

1J. Indrajit : Indrajit, Ravan’s son was jitendriya, which means he had attained victory over all his sense organs.

1K. Bindu and Rekha : These were the queens of Narantak, one of Ravan’s sons. The jiva should not remain bound by attractions of any kind such as Bindu and Rekha, else they become the cause for the annihilation (Anta) of man (Nara).

2. Implied meaning of some incidents from the Ramayan

2A. ‘Sita, the daughter of the earth Incident

Sita was found when ploughing the land

Implied meaning : Infant Sita was the manifest form of the  hiranyagarbha waves, that is, the waves emanating from the core of the earth. Since sound, touch, form, taste, fragrance and their energies coexist, when one of the components is present, others too are present. (For example, when a Name is chanted, the form, fragrance etc. accompany it.) Similarly, infant Sita was the manifest form of a specific energy, that is, hiranyagarbha Shakti (Divine Energy); while Sita as Ram’s
wife was the form of Ram’s Shakti. Detailed information on hiran-̣yagarbha waves is provided in Sanatan’s Holy texts associated with Deities.

2B. Kaikeyi asking for a boon Incident

With one boon Kaikeyi got Ram banished to the forest for 14 years and with the other, she asked that Bharat be made king.

Implied meaning : Shravankumar’s grandfather was Sage Dhoumya and his parents were Ratnavali and Sage Ratna. Sage Ratna was the royal priest of the kingdom of Nandigram ruled by King Ashvapati. Kaikeyi was the daughter of King Ashvapati. Sage Ratna had taught Kaikeyi all the scriptures and had also warned her that if Dasharatha had sons, they would either not be able to ascend the throne or if they did (ascend it) after Dasharatha, then within 14 years the Raghu dynasty would be destroyed. To prevent this catastrophe, Sage Vasishṭha advised Kaikeyi to ask Dasharatha for two boons; through one she would send Ram into exile for 14 years and through the other, ask for Bharat to be made king, because she knew that as long as Ram was alive, Bharat would never ascend the throne. It is on the advice of Sage Vasishṭha that Bharat installed Ram’s paduka (Wooden footwear) instead of His Idol on the throne. If instead of the paduka an Idol had been installed, then with the principle that sound, touch, form, taste and fragrance coexist, the effect would have been as if Ram had Himself ascended the throne. ‘The original Valmiki Ramayan contains 3 shlokas with this meaning. However, some researchers feel that those who re-wrote the Ramayan after 1228 A.D. omitted these’.

‘Asking for Ram’s paduka’ means ‘placing the head on the feet’ or ‘complete surrender’. When Bharat asked Ram for His paduka He gave them to Bharat. Bharat then carried them on his head in such a manner that the toes were towards the front, installed them on the throne and performed ritualistic worship. Since then, the custom of paduka-puja began.

1. Incident : After procuring Ram’s paduka, Bharat installed them at Nandigram. He did not reside in Ayodhya.

2. Incident : When accepting Ram’s paduka, Bharat pleaded with Ram to inform him about His return from exile along with Sita, so that he could prepare for His reception. Upon this, Ram said, ‘So be it’.

Implied meaning : ‘Along with Sita’ means along with Shakti (Divine Energy), that is, after awakening of the Kunḍalini. ‘About His return’ means before attainment of self-realisation. Bharat said he wanted to know when he would go into nirbij samadhi (The highest superconscious state, the state of advait [non-duality]).

Implied meaning : For 14 years Lakshman survived only on air. To protect Ram, he did not even sleep. He was constantly engrossed in sadhana.

Incident : Ravan abducted Sita and kept Her with him.

Implied meaning : The real Sita never went with Ravan. She enteredthe fire and Her image accompanied Ravan. It was at this point that Ram’s leela (Divine play) in the true sense began. When returning from Ravan, on the pretext of purification in the fire, Her image entered the fire and the real Sita emerged.

Incident : After Sita’s abduction, crying out for Her, Ram embraced the trees.

Implied meaning : He perceived how the trees and creepers felt.

Incident : Ram shot Vali with an arrow because of which he died.

2I. Slaying of Ravan : Ravan was a great devotee of Deity Shiva.

His spiritual progress had stopped at the level of the Sahasrar-chakra. Ram did not slay him; instead He penetrated his Sahasrar-chakra and blessed him with sadgati (Further momentum after death).

Incident : A washerman (Rajak) in the kingdom said that Sita was impure; hence, Shriram abandoned Her.

Implied meaning 1 : The one accusing Sita is a washerman (Rajak). His task is to wash clothes and remove all stains. The washerman said this to prevent any stigma from blemishing Shriram.

Implied meaning 2 : The word Rajak (रजक) is derived from two words – ‘raja (रज)’ and ‘ka (क)’. The letter ‘ka’ denotes a small part of an object. This means that the washerman had some Raja component in him because of which, he could not perceive the sattvik nature of Sita.

Incident : Ram slayed Shambuk, a matang (One belonging to a low caste), because he undertook austerities.

Implied meaning : Shambuk undertook the wrong austerities. Consequently, the atmosphere on the earth was polluted to such a great extent that the subjects were distressed and the sadhana of the Sages was interrupted. Hence, to fulfil the duty of a king, in the interest of His subjects and to protect the Sages, Ram beheaded Shambuk.

Incident : After Sita was engulfed by Mother Earth, Shriram renounced His body in river Sharayu.

Implied meaning : Shriram did not commit suicide by jumping into river Sharayu, but took samadhi in its waters. There are several types of samadhis – samadhi in the earth (Bhumi-samadhi), in water (Jalasamadhi), in the fire (Agni-samadhi) etc. Saint Dnyaneshwar took samadhi in the earth, while Saint Eknath and Saint Ramtirtha took samadhi in water. Samadhi is possible only for those who have no attachment to the body. After Shriram renounced His body, all the residents of Ayodhya followed suit, because they felt that their life without Shriram was now meaningless.’ – His Holiness Anna Karandikar, Dahanu, Maharashtra