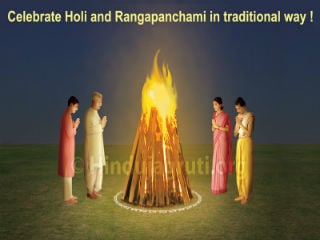 Phalgun Pournima to Panchami. The Holi festival is celebrated for two to five days depending on the regional variations. It has various names such as Hori, Dolyatra in North Bharat, Shimga, Holi, Hutashani mahotsav and Holikadahan (burning of Holika) in the state of Goa and Maharashtra, and Kamdahan (burning of desires) in South Bharat. This festival is celebrated as Dolyatra in the state of Bengal. It is also called Vasantotsav or Vasantgamanotsav, that is, the festival celebrated to welcome the Vasant (spring) season.’

Videos included in the above playlist :

A. ‘Once upon a time a female demon named Dhundha or Dhoundha entered a village and harassed young children. She generated diseases. People tried their best to drive her away from the village; however she would not budge. Finally, people abused and cursed her; they lit a fire everywhere to frighten her. This made her run away from that village. (From the scripture – Bhavishyapuran)

B. In North Bharat, an effigy of the demoness Putna is made and burnt on the night of Holi festival. Three days before Holi festival, Bal-Krushna is kept in a cradle and His festival is celebrated. On the full moon night of the Hindu lunar month of Phalgun, an effigy of Putna is burnt.

C. Once, Lord Shiva was engrossed in penance and was in a state of meditation. At that time, Madan (also known as Kamdev, a God instrumental in generating desire) entered His mind. Shiva then opened His eyes to see who was distracting Him and in one glance burnt Madan to ashes. The people of South Bharat celebrate this festival signifying the burning of Kamdev (Deity of Desire). On this day, an effigy of Madan is made and burnt. Holi festival has the ability to win over Madan; hence the festival of Holi.’

The Holi has to be lit in front of a temple or at a comfortable place on the evening of Pournima. Generally, this is done in front of the Gramdevta.

In the centre of the fire, there is either a castor-oil plant, coconut or areca-nut tree or sugarcane, around which dry cow dung cakes and dry wood are arranged. After a bath and recital of thedeshkal (Place and time), the person performing the ritual should first make the following resolve – “To get relief from the trouble caused by Dhundha, my family members and I worship Holika.” Next, the puja is performed, followed by offering of naivedya. After this, saying || Holikayai Namaha ||, the fire should be lit and circumambulated. Then make a shrill noise, with the palm over the mouth. After the fire is completely burnt, it should be extinguished by  sprinkling milk and ghee. Fruits like coconut, grape fruit should be distributed to people assembled there. The entire night should be spent in singing and dancing.

The next day at dawn, after paying obeisance to the ash of the Holi, it should be applied to the body and then one should bathe. This prevents mental suffering and diseases. In the morning, the ash of the Holi should be immersed in flowing water after talking in an obscene language, followed by a prayer to Holi.

The reason for the use of obscene language

A. This is a ritual to pacify the cruel mentality.

B. The lunar asterism Purva-phalguni is present on the full moon day of the month of Phalgun. The Deity of that lunar asterism is Bhag. The common meaning of Bhag, is the female reproductive organs. Screaming taking the name of Bhag is a type of worship by itself. One must realise that it indicates honouring of the Deity. In  some places it is customary to smear the body with substances like ash of Holi, cowdung and mud and indulge in dancing and singing. 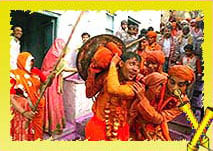 Seeing the form of the Holi festival as prevalent today one realises that this festival is basically celebrated at a social level. Though over the passage of time a number of religious and cultural rites and rituals have been included in it by more civilised people, yet the social form of this festival has still remained intact. Holikotsav, Dhulikotsav and Rangotsav are the three festivals which stand out easily. Holi, Dhulvad and Rangapanchami are their popular names.

Do’s and Dont’s of the Holi Festival

On this day either the ashes of Holi or dust is worshipped. This is the first day (pratipada) in the dark fortnight of the Hindu lunar month of Phalgun. Dhoolivandan is also known as Dhulvad in Marathi. After ritualistic worship the ashes of the Holi sacrificial fire is offered obeisance with the following mantra which means:

Meaning : O Lakshmi, You are adored, worshipped by Brahma, Vishnu and Mahesh; and that is why O Goddess of prosperity, be an endower of prosperity to us and protect us.’

Shri Vishnu performed Dhoolivandan at the beginning of Tretayuga. The implied meaning is, Lord Vishnu began His ‘work’ through the incarnation of various radiant colours. Rang panchami, played without Dhoolivandan signifies the ‘Play’ (Leela) of the Incarnation, which is manifest in the forms of various colours. The Dhoolivandan is the worship of the destroyer form of the Deities. – Pujya (Mrs.)Anjali Gadgil 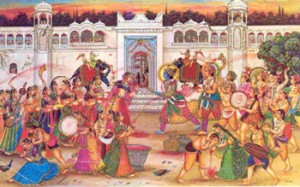 It is celebrated on the fifth day (panchami) in the dark fortnight of the Hindu lunar month of Phalgun by throwing a red, fragrant powder (gulal) and splashing coloured water, etc. on others.

The fire, which shines with its brilliance on Holi, decomposes the raja-tama particles in the atmosphere and this helps activate various Deities in the form of colours. This bliss is celebrated by throwing colours in the air. Thus, Rang Panchami is a symbol of victory over raja-tama. Rang Panchami, played on Falgun Vadya Panchami involves invocation of Gods and is a part of worship of the manifest form of Gods. Its purpose is to activate the five elements of radiant manifest colours and to touch and feel the Deities who are attracted to the respective colours. These five elements are a source, which help activate the element of the Deities according to the spiritual emotion of the Jiva. Rang Panchami is the worship of the saviour form of the Deities. – Pujya (Mrs.)Anjali Gadgil