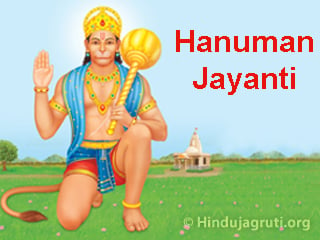 Hanuman Jayanti is celebrated on the full moon day (pournima) of the Hindu lunar month of Chaitra. A special feature of Hanuman Jayanti is that according to some religious almanacs (panchangs) the birthday of Shri Hanuman falls on the fourteenth day (chaturdashi) in the dark fortnight of the month of Ashvin while according to others it falls on the full moon day in the bright fortnight of Chaitra. On this day, in a Hanuman temple spiritual discourses are started at dawn. Hanuman was born at sunrise. At that time the spiritual discourse is stopped and the offering of food (Prasad) is distributed to everyone.

Incidents in Shri Hanuman’s life and their significance 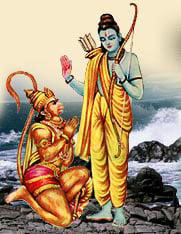 For this reason itself Shri Hanuman manifests Himself in various forms during different Yugas. His task in the manifest-unmanifest form never ceases. Shri Hanuman has humility in serving (i.e. Dasyabhav) to the extent of 100%. Thus He is constantly active.

Liberating many souls : The embodied souls with an intense desire for spiritual practice were granted liberation by Shri Hanuman even at the cost of His own powers. He liberated many souls from existence in their cursed class by using His mace.

An example of a perfect Sevak : Shri Hanuman presented an example of a perfect sevak. As a result, many embodied souls attained Final Liberation by following the same path i.e. Dasyatva. Due to His humility only He was able to narrate the good qualities of Shri Rama to Ravan and when Ravan denigrated Shri Rama, Hanuman burnt Lanka and returned safely.

Q. – How should a worshipper apply sindoor before starting the ritualistic worship of Shri Hanuman ?
Ans. – Sindoor should be applied with the ring finger.

Q. – Which flowers should be offered? In what number? What is the method of offering the flowers ?
Ans. – Flowers and leaves of calotropis (ruee) Five or multiples of five. The stems of flowers should be turned towards the Deity.

Q. – How many circumambulations should be performed around Shri Hanuman ?
Ans. – Minimum five but if a worshipper wants to perform more, then they should be in multiples of five.

While enduring a Saade-saati of Saturn, Shri Hanuman is worshiped to reduce the distress caused by Saturn. The ritual is as follows:

The sacred thread (Janeu) on Hanuman’s left shoulder is a sign of Brahmatej. Since Shri Hanuman is an incarnation of Shri Shiva He has destructive powers too. Yet, because of His devotion to Shri Rama, Vishnu-tatva developed in Him. Since Shri Hanuman adorns Brahmatej and Kshatratej during wars, He can use both as required. During the war between the Kauravas and Pandavas, Shri Krishna seated Shri Hanuman on Arjun’s chariot (He can be seen on the flag at the top of Arjun’s chariot). Hanuman destroyed the weapons, directed at Arjun and his chariot, in mid-air itself.

To get the benefit of the gross, manifest and destroyer element, we should avoid installing an idol of Shri Hanuman in the seated posture. Amongst the seven higher Deities (Shiva, Ganapati, Rama, Krishna, Datta, Maruti and Durga), Shri Hanuman’s element (tatva) is of a gross, manifest and destroyer nature. The word ‘Hanuman’ means – ‘One whose ‘roar’ cannot be fathomed even by the Gods’. When Gods perform a destructive activity, they use the ‘Maruti’ element (which moves at the speed of wind) as a medium to appear in the Universe. Hence He is referred to as Shri Hanuman. The roar of Shri Hanuman is capable of activating the element of any higher Deity in the Universe who is engrossed in deep meditation. Similarly, it also possesses the power to shake all the fourteen planes (Saptalok and Saptapatal).

The modern Ghazhani MF Hussain has painted Shri Hanuman in very blasphemous form along with Sree Sita and Shri Ram. Following are some paintings by Hussain. Shri Hanuman is a symbol of devotion and Divine power. Hindus worshipping Shri Hanuman should take note of his strength and wake up to destroy these despicable modern forms of Rawan, then it will be the true worship of Hanumanji.

Defamation of Shri Hanuman by anti-Hindus!

The defamation of Shri Hanuman and the Ramayana is going on through the various medias and anti-Hindus. Here are a few examples of it.

Become a Rambhakta and save Hindu Dharma !

Hindu Dharma is now in great danger due to growing attacks on it from anti-Hindus, socialists, Muslims and Christians. Hindu Dharma is now in search of warriors to protect it from these attacks and to take it very high. You can do it in various easy ways. Because ‘changes do not occur by big miracles, but due to acts well within the common man’s reach’

1. Protest against any defamation of Hindu Dharma and make efforts to punish the guilty.
2. Start spiritual practice by which you will get the blessings of Deities and your mission will succeed.
3. To know the ways you can serve Dharma visit the How to contribute section of our website. – Editor