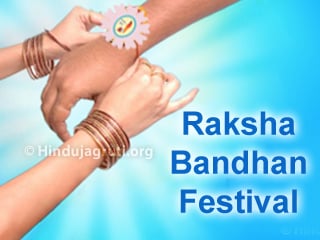 Deity Lakshmi tied a rakhi onto the wrist of the King Bali from hell thus making him Her brother and liberated Lord Narayan i.e. Vishnu. That day as per the Hindu lunar calendar was ‘Shravan Paurnima’.

“By tying this wristband (raksha) onto your wrist I am binding you just like the powerful and generous King Bali was bound by it. O wristband, do not get displaced.” The Bhavishya Puran states that Raksha Bandhan was basically meant for kings. A new custom of tying rakhis began from the historical ages. The sister is supposed to tie the rakhi to the brother’s wrist. The feeling behind this is that the brother should become prosperous and he should protect the sister.

The science underlying Raksha Bandhan can be understood with the help of the Divine Knowledge received by Mrs. Anjali Gadgil, Sanatan’s seeker receiving Divine Knowledge.

On the day of Shravan Pournima high speed frequencies of Yama principle are activated in the universe. Particles of the Absolute Fire Element (Tej) are generated due to the friction between these high speed frequencies. These particles of Tej are emitted into the atmosphere. They become inert because of their union with the ground particles and they create a covering on the ground. This is called raksha.

Bali, the king of Hell region uses the raja-tama frequencies emitted by this raksha to nurture the negative energies. Hence, a woman ties rakhi to a man as a symbol of invoking Earth and taking Earth’s help in restraining this action of King Bali.

On the day of Shravan Pournima, Deity Laxmi tied rakhi to King Bali and freed Narayana.

Video about Science of Raksha Bandhan

Significance and Purpose of Raksha Bandhan

Religious actions to be performed while tying rakhi

Prayer to be made while tying rakhi

This means, I tie you with the same raksha, by which the powerful demon king, King Bali was tied. O rakhi, you remain steadfast.

As per the teachings of Bhavishyapuran, Rakshabandhan was primarily meant for kings. Nowadays this festival is celebrated by everyone. The sister ties her brother a rakhi on the day of Rakshabandhan.

Importance of tying rakhi without expectations

How should the spiritual emotion of the sister be while tying a rakhi? Srikrushna’s finger was cut and blood was oozing out of it. He went to Draupadi. Without much thought she tore a piece of the pallu of the expensive zari saree she was wearing and tied it to His finger. On Raksha Bandhan day every sister should have the spiritual emotion like Draupadi.

Non-sattvik gifts are raja-tama predominant. That is why a brother should give sattvik gift to his sister. By giving a sattvik gift like a religious holy text or chanting beads, which will augment sister’s spiritual practice, following benefits are derived:

Sattvik items do not affect the Jivas at a worldly level.
The Jiva which gives a sattvik gift benefits to the extent of 20% and the receiving Jiva benefits 18%.
By sattvik action the give and take account reduces and new account is not created.
Here the important thing is that the sister should tie the rakhi without any expectation of a gift.

How should the rakhi be?

In ancient times, akshat, that is, some unbroken rice grains were covered in white cloth and it was tied with silk thread as rakhi.

Divine Knowledge received by Sanatan’s seeker Mrs. Anjali Gadgil : Akshat, that is, unbroken rice is all encompassing and silk thread has the ablility of rapidly transmitting sattvik frequencies. Thus, rakhi is made from akshat and silk thread. This rakhi is tied to the brother by the sister. The frequencies of spiritual energy in the sister are transferred to the brother when the sister ties the rakhi to him. This activates the surya-nadi (sun channel) of the brother and the Shiva principle in him is awakened. This results in disintegration of the raja-tama particles present in the atmosphere.

Over the period of time, this type of rakhi has disappeared and presently, various types of rakhis are available in the market. Most of them are gaudy. They are not sattvik. The subtle effect of such rakhi is:

Both the sister and brother benefit from the frequencies in a rakhi. That is precisely why one must choose a rakhi, which will preserve the God principle for longer periods instead of choosing grossly attractive ones. Otherwise the three attributes from the rakhi have an effect on the embodied souls and their attitudes too become rajasik-tamasik, etc.

A sattvik rakhi in which Divine principle will get attracted and retained should be purchased. The subtle effect given below depicts how Sanatan-made rakhi is sattvik.

Stop denigration of deities occurring through the medium of the Rakhi

Nowadays, rakhis are decorated with ‘Om’ or pictures of deities. After use, these rakhis are discarded and thrown away. As they are then trodden under the feet by others it actually amounts to denigration of deities. We only have to incur sin for this. Hence, immerse rakhis in flowing water. Do practice this and educate others.

Also due to commercialisation of festival and lack of proper knowledge of its spiritual significance, people go far beyond in so-called creativity that compromises festival’s very purpose. Picture above depicting ‘Rakhi symbolising friendship between India and Pakistan’ is such an example.