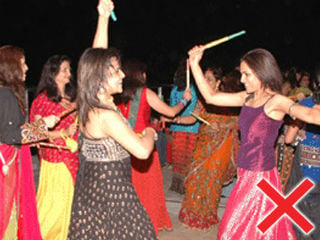 A religious festival is a collective religious rites performed by the people. People celebrating such festivals and participating in the rites experience joy and bliss. Every action in relation to God is an attempt to increase the Sattva component in ourselves. A Sattva predominant person tries to make others happy even if it is at the cost of his own happiness. Giving happiness to others does not reduce one’s own happiness. A Raja predominant person strives only for his own happiness or contentment; whereas a Tama predominant person aims to gain happiness at the cost of others’ happiness. If religious festivals are celebrated only with a purpose of increasing Sattva component, it helps to obtain spiritual benefits and also to imbibe Divine qualities. Festivals help to combat Tama frequencies. Most of the Hindu religious festivals are celebrated in the Chaturmas, i.e. four months from Shravan to Kartik as per the Hindu Calendar. During these four months Tama predominant Yama frequencies come to Earth. To combat these frequencies, it is essential for humans to increase their Sattva component.

2. Desecration of Culture in Modern Garba

Hindus, there is ongoing perversion of our public festivals. Most of the times, forgetting the religious, spiritual and social reason behind the celebration of the festivals, the festivals are only looked upon as pleasure and fun. If one has to obtain the best example, then if one goes through the newspapers to see preparations of Navratri, then one can see from the news with photographs everywhere of various garba classes and various costumes, the amount of time required for this, along with the order given by the court in relation to the dispute of noise pollution. There is no mention of God in the festival we celebrate and whose blessings we are trying to invoke. While defining the festival in the science of religion it is said that – the function that gives bliss to everybody is a festival. If one sees the present day festival then one will have to make a new definition that, ‘Making others unhappy in order to enjoy happiness (not bliss). As a result, barring a specific age group an average individual has started saying that, ‘We do not want this festival, let us live in peace’. Hindus, now prove your selves ready to face the various malpractices in Navratri as on the occasion of Shree Ganeshutsav. Forcible collection of donation, sound pollution, garba played to the tune of film songs, the ugly dance performed in a drunken state with obscene gesticulation are the various malpractices which are the warning bell of decline of Hindu religion and civilization. In order to caution the Hindus about this danger, so also in order to protect and maintain the Hindu religion and civilization, we have undertaken this task of writing the article! These malpractices are harmful to our Dharma and culture. Today, putting an end to these is a part of abiding by Dharma. For the past few years, Sanatan Sanstha and Hindu Janajagruti Samiti has been conducting public awareness campaigns against such malpractices; you too can participate in these campaigns!

3. The modern Garba and Dandiya pervert the main intention of traditional Garba

It is necessary that certain rhythmic movements of the body occur during the Garba as is seen in traditional garba. But presently there is quenching of one’s dancing enthusiasm by diverse gesticulations. In such dances as there is more of boisterousness, incidents of dashing each other, intentional body touching occur. In the traditional Garba dance one has to gently touch the stick in the other’s hand, but presently in the Garba dance they are struck anyhow in a forceful manner.

3 C. Absence of piety as is present in traditional Garba

Traditional Garba is a form of worship of the Goddess. Thus, it is mandatory to safeguard piety while performing tradtional Garba. The feeling of devotion that one has while worshipping a deity should also be fostered while playing traditional tGarba. However, in the present times, people are seen wearing gaudy and revealing costumes for Garba! Thus, it has become a medium of show and pomp, rather than that of fulfilling spiritual pursuits! People performing Garba mostly comprise of drunkards in large numbers. Also, people perform it with their footwear on. All these malign the sanctity of the festival.

In recent times, young boys and girls who are sexually attracted to each other consider Garba a medium to come together ! This results in immoral acts. After performing Garba, these boys and girls loiter on the roads instead of going home. Police Officials report that, such youngsters leave their homes under the pretext of Garba and indulge in drinking and misbehaving on the streets. A Gujarati periodical brought out the shocking news that there is a significant rise in the incidence of abortions by unwed mothers in Mumbai and Gujarat, a few months after the Navratri festival!

4. Commercial nature of Garba which is exactly opposite to Traditional Garba

4 A. Collection of Funds – A source of earning money !

In the name of Garba, donations are demanded in some places, based on the size of residential flats in the colony, that is depending upon the standard of living of the donor, e.g. in Vapi, Gujarat, in one of the years, Rs. 1,500/- & Rs. 1,000/- respectively were collected from residents of 3 & 2 BHK flats in a prestigious colony.

The entry fees for ‘Disco Dandiya’ vary from Rs. 100/- to Rs. 1,000/- per day. In cities like Mumbai, popular actors and actresses are invited for Garba. To participate in such a Garba, one has to pay a huge entry fee. Garba organisers earn rupees 25 to 30 crores through this medium. People who accumulate wealth through illegal means have also viewed Garba as a medium of earning money.

In some places, there is a practice of awarding a person who purchases entry tickets worth thousands of rupees for playing Garba, Dandiya/Disco-Dandiya, as a lucky winner, with gifts worth Rupees 5,000 – 10,000/- on a lottery basis. Garba organisers fill their coffers by taking advantage of the faulty attitude prevalent amongst general public to ‘get rich overnight’! Many such Organizers attract Garba and Dandiya lovers enticing them with expensive cars as gifts. Thus, they indirectly encourage gambling habits in the society.

5. Failure of politicians in curbing malpractices

Malpractices prevalent in Garba, which have an adverse effect on Hindu Dharma, are on the rise. These can put an end to Hindu customs, traditions and cultural values. Despite all this, the politicians whose duty is to put an end to such practices remain passive. Politicians, with a view to safeguard their political interests, allow people to do whatever they desire, instead of guiding them on the correct path. During the festive period, rules prevalent with regard to noise pollution and morality are given a backseat. Although these are well-known facts, both, politicians and the administration ignore them. Hence, the judiciary has to interfere in such issues.

6. What do we achieve through the modern Garba?

On seeing this pitiable state of Modern Garba, a question that comes to mind is, ‘What do we achieve out of all this?’

6 A. No benefit of the Divine principle

As a matter of fact, the purpose of Garba is to acquire the grace of the Goddess through her worship. However, nowadays the malpractices prevalent in the name of Garba result in a failure of this objective.

There has been a rise in the tama component and reduction in the piousness of the Navratri festival due to incidents of looting of devotees, immoral activities that take place in the name of Garba, etc.

Festivals and religious celebrations are the best available opportunities for impressing values of loyalty to Dharma (Righteousness) and the Nation. However, the ongoing Garba celebrations do not facilitate this. On the contrary, they result in impressing wrong values!

7. Significance of the traditional Garba

7 A. The spiritual importance and the meaning of the word Garba

In Gujarat during the Navratri festival a lamp is kept in an earthen pot with multiple holes as a symbol of ‘MatruShakti’ (mother energy) and worshipped. With the omission of the word Deep from the word Deep Garbh the symbol of fertility in female worshipped for 9 days, the word Garbh and later Garba is currently used.

7 B. Cultural significance of the traditional Garba

In the olden times earthen pots with multiple holes were kept on one another in front of the Goddess on the first night. A lamp with four lit wicks was placed in the first pot and the lamp was uninterruptedly kept lit. Rounds of dance were performed around the lamp. There are two types of folk dances performed during ‘Garba’. The dance preformed by the males standing in a circle singing while clapping with simple feet movements is called ‘Garbi’ and the dance performed by females with delicate body gesticulations is called ‘Garba’. The songs praising Amba, Kalika, Randalmaa and other goddess are sung during ‘Garba’. At that time, in order to generate chivalry, instruments like drum and clarion are used. Over a period of time there was dance on songs based on Krushnaleela composed by saints, description of seasons, or related to social issues. Instead of claps there was use of instruments like Khanjiri, Manjiri and stack of lamps were used in the dance.

According to Hinduism, performing ‘Garba’ means singing devotional hymns praising the Goddess with rhythmic clapping. Singing devotional hymns means awakening Shri Durga Devi from Her meditation through the medium of the manifest spiritual practice of rhythmic clapping, and appealing to her to assume the destructive form for Her activity in the Universe.

The organizer of Garba program for the last 55 years Shri. Nyaas from Kolhapur in this context says ‘Mother Goddess protected us by slaying the Demon. We cannot pay her back; so in order to gratify her, to please her, this dance is performed. This dance is a form of worship to please the goddess like Kirtan and Bhajan’. The priest of Radhakrishna temple at Kolhapur says ‘The ‘Dandiya’ in the ‘Garba’ dance is the symbol of ‘Khadag’ (sword like weapon in the hand of the Goddess).’ It is used to tell the Goddess that, ‘We are doing your worship’. The Dandiya dance should be done with the attitude of being a warrior. The movement of the ‘Dandiya’ should be like that of the sword. At the time of this dance the song should be in relation to the Goddess.

8. To stop the undesirable practices in Navratri you can do this !