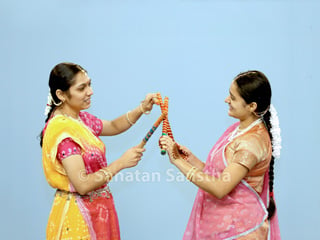 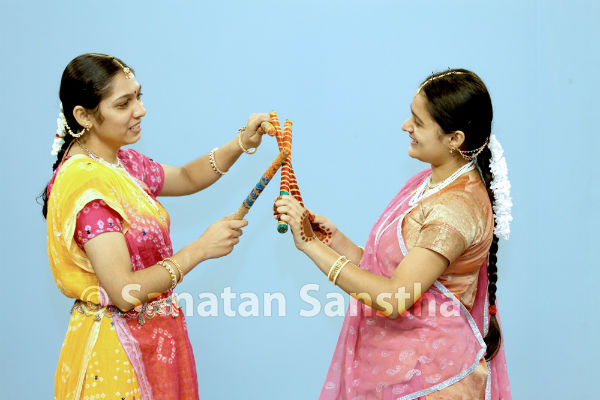 What is the significance of playing ‘Garba’?

In the Hindu Dharma, playing garba implies singing bhajans (Devotional songs) showering praises on the Goddess amidst rhythmic clapping. Playing garba is awakening Shri Durgadevi from Her meditation through saguṇ worship, that is, the sound of clapping and praying to Her to assume the marak form for the mission of the universe.

While playing the Garba should one use a rhythm of two claps or three claps?

During Navratri, the maraktattva of Shri Durgadevi gets activated in phases. Brahma, Vishṇu and Mahesh are the three main phases of God. To activate the maraktattva of the Goddess in all three phases, we clap thrice and the sankalp energy of the Goddess in the form of Shakti existing in the universe is activated. Hence, it is more appropriate and beneficial to venerate the Goddess through the rhythm of three claps. The meaning of three claps is as follows.

A. The first clap is associated with Brahma, which here means the Iccha-shakti. That is why, in the universe the Iccha waves are awakened, and based on the bhav within the jiva, the desires in it are fulfilled.

B. Through the medium of the second clap, the kriya waves that are Vishnutattva oriented impart energy to the jīva to actually perform wilful actions.

C. Through the medium of the third clap, the dnyan waves that are Shiva Principle predominant actually accomplish the task and impart the jiva with the desired benefit. Impact of the claps generates Tej and this
makes it possible to awaken the maraktattva (Destroyer Principle) of the Goddess. Clapping represents worship of the Tej Principle. Singing bhajans charged with devotion by clapping while moving in a circle helps in  awakening bhav for the Goddess.