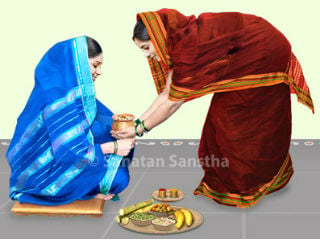 Makar Sankranti festival, unlike other Hindu festivals, is not dependent on the position of the moon, but on position of the sun. On this day, the sun enters the zodiac sign of Capricorn. To compensate for the difference that occurs due to the revolution around the sun, sometimes the day of Sankranti is postponed by one day.

Sankranti is considered a Deity. According to a legend Sankranti killed a demon named Sankarasur. The day followed by Makar Sankrant is called Kinkrant or Karidin. On this day, the female deity (devi) slayed the demon Kinkarasur.

Makar Sankranti is the day from which the northward movement of the sun begins. The period from KarkaSankranti(the passage of the sun into the zodiac sign of Cancer) to Makar Sankranti is called the dakshinayan. As per given in Hindu scriptures, A person who dies in the dakshinayan period has a greater chance of going to Yamalok (southward region), than one who dies during uttarayan (northward revolution).

Methods of celebration of Makar Sankranti

1. Benefit of highest merit acquired by a Holy dip on the day of Makar Sankranti

The time from sunrise to sunset on Makar-Sankrantiis auspicious. A Holy dip during this period carries special significance. Those who take a Holy dip in the rivers Ganga, Yamuna, Godavari, Krushna and Kaveri at the Holy places situated on the banks of these rivers acquire the highest merit.

2 A. Substances offered on Makar Sankranti

An offering of new vessels, clothing, food, sesame seeds, pot of sesame seeds, jaggery, a cow, a horse, gold or land should be made depending on the capability. On this day, married women also make some offering. They take things from unmarried girls and give them sesame seeds and jaggery in return. Married women organise a ceremony of haldi-kumkum (applying vermilion and turmeric to the forehead) and gift articles to other married women.

Importance of haldi-kumkum ceremony performed by married women on Makar Sankranti : Performing haldi-kumkum (Turmeric powder and vermilion) ceremony is in a way invoking the waves of dormant Adi-shakti in the Universe to get activated. This helps in creating impression of Sagun (Materialised) devotion on the mind of an individual and enhances his bhav (Spiritual emotion) unto God.

2. Applying perfume : Fragrant particles emitting from the perfume please the Principle of the Deity and bestow well-being to the applier suvasini within a shorter period.

3. Sprinkling rose-water : The fragrant waves emitted by the rose-water activate the waves of the Deity and purifies the environment, and the suvasini who sprinkles it gets greater benefit of the activated Sagun Principle of the Deity. 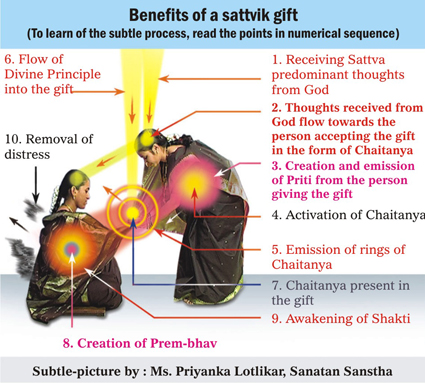 4. Offering a gift : A gift offered is always supported by the end of the pallu of the sari. Offering a gift to another suvasini amounts to surrendering to the divinity in her, through sacrifice of body, mind and wealth. Giving support of the end of pallu of the sari means leaving attachment to even the clothes worn on the body and thus learning to overcome body awareness. Since the period of sankranti is favourable for sadhana, a gift given during this period pleases the Deities quickly and they bestow the donor suvasini with the desired  fruit.

What should be gifted ? : Instead of gifting non-dharmik commodities like soap, plastic items etc., objects complementary to Spirituality and are indicators of a married life, such as incense-sticks, ubtan (Fragrant herbal powder), religious and Holy texts, pictures of Deities, CDs on spiritual topics etc. should be gifted. 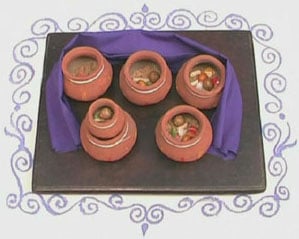 The festival of Sankranti requires small mud pots called sugad (in the Marathi language). Vermilion and turmeric powder is applied to the pots and a thread is tied to them. They are filled with carrots, jujube fruits, sugarcane pieces, pods, cotton, chickpeas, sesame seeds with jaggery, vermilion, turmeric etc. Five pots are placed on a wooden seat, rangoli is drawn around the seat and worshipped. Of these, three are gifted to married women, one is offered to the tulsi plant and one is retained.

Use of sesame seeds 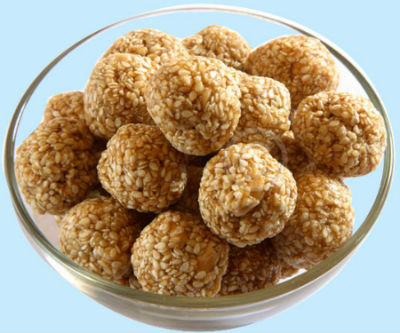 Importance according to Ayurved: Since Sankranti falls in winter, consuming sesame seeds  is beneficial.

Importance according to Spirituality:

1. Since sesame seeds have a greater ability to absorb and emit sattva frequencies, consuming  tilgul helps improve spiritual practice. Distributing tilgul to one another results in an exchange of  the sattva component.

2. Using sesame seeds in shraddh prevents demons from bringing obstacles during the rite.

During the period of sankrant, talking harshly, cutting trees or grass and acts  provoking sexual urges should be avoided.

Do not fly kites ! 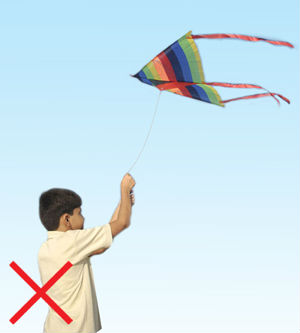 Today, when the Nation and Dharma are in peril, flying kites for the sake of entertainment is akin  to, ‘Nero playing the fiddle while Rome burnt’. If the time spent on flying kites is used for the  development of the Nation, it will make it progress faster; and if used for spiritual practice and  missions related to Dharma, then society and the individual will benefit.

This festival is celebrated differently in different parts of the country.

In Uttar Pradesh, Sankranti is called ‘Khichiri’. Taking a dip in the holy rivers on this day is regarded as most auspicious. A big one-month long ‘Magha-Mela’ fair begins at Prayag (Allahabad) on this occasion. Apart from Triveni, ritual bathing also takes place at many places like Haridvar and Garh Mukteshwar in Uttar Pradesh, and Patna in Bihar.

In Bengal every year a very big Mela is held at Ganga Sagar where the river Ganga is believed to have dived into the nether region and vivified the ashes of the sixty thousand ancestors of King Bhagirath. This mela is attended by a large number of pilgrims from all over the country.

In Tamil Nadu Sankranti is known by the name of ‘Pongal’, which takes its name from the surging of rice boiled in a pot of milk, and this festival has more significance than even Diwali. It is very popular particularly amongst farmers. Rice and pulses cooked together in ghee and milk is offered to the family deity after the ritual worship. In essence in the South this Sankrantiis a ‘Puja’ (worship) for the Sun God.

In Andhra Pradesh, it is celebrated as a three-day harvest festival Pongal. It is a big event for the people of Andhra Pradesh. The Telugus like to call it ‘Pedda Panduga’ meaning big festival. The whole event lasts for four days, the first day Bhogi, the second day Sankranti, the third day Kanuma and the fourth day, Mukkanuma.

In Karnataka, the festival is marked by visiting one’s friends and relatives to exchange greetings, and by the preparation of a dish called Ellu (made with sesame seeds, coconuts, sugar blocks, etc). A common custom found across Karnataka is the exchange of sugarcane pieces and Ellu with one’s neighbors, friends and relatives. In Karnataka, Pongal is known as ‘Sankranti’, and cows and bullocks are gaily decorated and fed ‘Pongal’- a sweet preparation of rice. Special prayers are offered. In the evening, the cattle are led out in procession to the beat of drums and music. In the night a bonfire is lit and the animals are made to jump over the fire.

Makar Sankranti is marked by men, women and children wearing colorful clothing; visiting near and dear ones; and exchanging pieces of sugarcane, a mixture of fried til, molasses, pieces of dry coconut, peanuts and fried gram. On this auspicious day, people in Karnataka distribute Yellu and bella (Sesame seeds and Jaggery) and greet with the words ” “Ellu bella thindu, Olle Maathu Aadu” (Eat sesame seeds and speak only good). The significance of this exchange is that sweetness should prevail in all the dealings.

In Maharashtra on the Sankranti day people exchange multi-colored tilguds made from til (sesame seeds) and sugar and til-laddus made from til and jaggery. Til-polis are offered for lunch. While exchanging tilguls as tokens of goodwill people greet each other saying – ‘til-gul ghya, god god bola’ meaning ‘accept these tilguls and speak sweet words’. The under-lying thought in the exchange of tilguls is to forget the past ill-feelings and hostilities and resolve to speak sweetly and remain friends.

This is a special day for the women in Maharashtra when married women are invited for a get-together called ‘Haldi-Kumkum’ and given gifts of any utensil, which the woman of the house purchases on that day. Hindus wear ornaments made of ‘Halwa’ on this day.

In Gujarat Sankranti is observed more or less in the same manner as in Maharashtra but with a difference that in Gujarat there is a custom of giving gifts to relatives. The elders in the family give gifts to the younger members of the family. The Gujarati Pundits on this auspicious day grant scholarships to students for higher studies in astrology and philosophy. This festival thus helps the maintenance of social relationships within the family, caste and community.

In Punjab where December and January are the coldest months of the year, huge bonfires are lit on the eve of Sankranti and which is celebrated as “LOHARI”. Sweets, sugarcane and rice are thrown in the bonfires, around which friends and relatives gather together. The following day, which is Sankrant, is celebrated as MAGHI. The Punjabi’s dance their famous Bhangra dance till they get exhausted. Then they sit down and eat the sumptuous food that is specially prepared for the occasion.

The 40 days anushthana by the devotees of Ayyappa ends on this day in Sabarimala with a big festival.

In Bundelkhand and Madhya Pradesh this festival of Sankranti is known by the name ‘Sakarat’ and is celebrated with great pomp & merriment accompanied by lot of sweets.

Many tribals in our country start their New Year from the day of Sankranti by lighting bonfires, dancing and eating their particular dishes sitting together. The Bhuya tribals of Orissa have their Maghyatra in which small home-made articles are put for sale.

In Assam, the festival is celebrated as Bhogali Bihu.

In the coastal regions, it is a harvest festival dedicated to Indra.