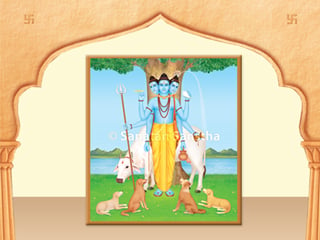 The principle that makes available to an embodied soul both gross and subtle (i.e. manifest and unmanifest) frequencies of higher or lower Gods and Deities in a shorter time is called Lord Datta or Shri Dattatreya. The very meaning of Datta is the ‘One who provides frequencies of Divine consciousness’. – (Pujya) Ms. Anjali Gadgil

Shri Dattatreya bestows His grace on man by giving speed to the journey of his ancestors to the next region and reducing his distress from ancestors. God gives man a chance to get liberated from the debt of ancestors through the ritual that gives speed to ancestors onward journey and through chanting the Name of Dattatreya.

One cannot get rid of the ancestors’ debt merely by remembering them off and on, displaying their photos in the house or publishing their photos in newspapers on their death anniversaries. It is only by chanting the Name of Dattatreya that the ancestors get speed to go on their onward journey in true sense. From this we can realise that it is imperative to worship the Deity to get liberated from the ancestors’ debt. This also reduces the debt of God on us. – Ms. Madhura Bhosale

A. The one who upholds the nobility of Varṇashramdharma (The system of four social classes and Ashrams [Stages of life]). (Details on this are provided in Sanatan’s Holy text ‘Varṇashramvyavastha’)

B. An ideal of Guru Principle and exponent of Yoga (According to Shanḍilyopanishad). Wellknown disciples of Lord Datta include Alark, Prahlad, Yadu, Sahasrārjun, Parshurām etc.

D. With behaviour like that of the evolved (like Shrikrushṇa), one freed from the bondage of religious restrictions (Markanḍeyapuraṇ).

E. One who lives as He wishes and is readily accessible (to those who remember Him).

H. A symbol of harmony

I. One who liberates from the problems caused by deceased ancestors. Read More

1. To reside at : Peak of Meru Mountain

2. To bathe at : Varanasi (on the banks of River Ganga)

5. For morning sandhya (Rituals of devotion performed by Brāhmaṇs) : Kedar

9. For lunch : Panchaleshwar, District Beed, Marathwada, Maharashtra in the bed of River Godavari

12. For evening sandhyā : Ocean to the west of Bharat

13. To hear Puraṇs : Naranarayan Ashram (Variation – to hear discourses and kīrtans [Narration of the glory of God through stories, punctuated with devotional songs] : Naimisharanya, Bihar)