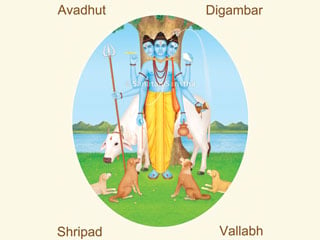 In this article, we will obtain knowledge about Shri Datta, also known as Shri Gurudev Datta or Datta Guru.

1. Names of Shri Datta & their meanings

Datta is one who has been bestowed with the spiritual experience of the  nirguṇ  (Nonmaterialised), meaning, the one  who has been given the experience that the ‘Self’ is Brahman (God  in  His  aspect  as  the  Creator  of  the universe) or mukta (Liberated) self or the soul.

Dhu (धू) = One whose (spiritual) ignorance has been dispelled with spiritual knowledge, meaning, the one who emancipates all. (ज्ञाननिर्धूत वल्याण: ।).

A (अ) = This syllable stands for aksharatva. Avadhut is the one who has had the sakshatkar (Self-realisation) of Aksharbrahman (Brahman Principle in the alphabet). Aksharatva means the ability to complete a task successfully.

Va (व) = This word is derived from ‘Vareṇyatva’, that is, pinnacle of greatness or Absoluteness.

Dhu (धू) = This refers to one who is freed from all types of bondage, is Liberated, and one who does not function with any title or restrictions.

Ta (त) = This represents the immortal statement ‘तत्त्वमसि’, meaning, ‘You are that Principle’ (One of the four immortal statements from the Upanishads (These are a class of philosophical writings attached to the Brahman section of Vedas; their aim is exposition of the secret meaning of the Vedas (note) and are regarded as the source of Vedant philosophy)).

In brief, the title of Avadhut is given to a great Saint who remains engrossed in self-realisation

Meaning : That which cleanses or destroys Sattva, Raja and Tama is Avadhut; this is how He is described according to the Siddhasiddhantapaddhati (6.1), a Holy text by Gorakshanath.

Meaning : ‘Avadhut’ is a devotee. Shri Gurudev Datta is one who is ever engrossed in contemplation of devotees, that is, He is the well-wisher of devotees.

This word is derived from Datta and Atreya. The meaning of ‘Datta’ has already been explained above. ‘Atreya’ means the son of Sage Atri.

Is the principle which gives company to an embodied soul till it gets Final Liberation in the radiance of the sky, i.e. beyond all the directions.

The Datta principle in the form of Vallabh protects the Universe from the circular-shaped negative energies that create fear psychosis, and thus protects the embodied souls. – (Pujya) Ms. Anjali Gadgil

Once Brahma, Vishṇu and Mahesh together set out to test the purity of Anasuya, Sage Atri’s wife. Due to her purity, three sons were born to her; one each from the fractions of Brahma, Vishṇu and Mahesh. Deity Datta was born from the fraction of Deity Vishṇu. Most people know this metaphorical story from the Puraṇas (The eighteen sacred Holy texts compiled by Sage Vyas). From the spiritual perspective, the implied meaning of ‘Atri’ is as follows.

‘A’ (अ) means ‘absent’ (‘A’ is indicative of negation) and ‘tri’ (त्रि) means ‘tripuṭi (Triad of doer of the karma, the karma and the act of performing the karma that are inter-related)’. Hence, ‘atri’ is one who is devoid of triputi such as the states of wakefulness-dream-deep sleep, Sattva-Raja- Tama (note) or one who meditates-goal-meditation. The intellect of such an ‘atri’ is without any asuya, that is, desire-anger and the six types of action, and is thus pure. This pure intellect itself is called ‘anasuya’. Deity Datta was born from the sankalpa (Resolve) of such pure intellect.

If you look closely at the appearance of Deity Datta, you will notice that Diety Datta is never alone. A cow is depicted behind Him, while four dogs are seen standing or sitting attentively around Him. We can also notice that Deity Datta stands under a huge fig tree. Let us understand what these three aspects convey.

A. The cow (standing behind Deity Datta) : The earth and Kamadhenu (Divine wish-fulfilling cow)

B. The four dogs : The four Vedas

C. The Holy fig tree (Oudumbar) : The venerable form of Deity Datta; because it contains a greater proportion of the Datta Principle