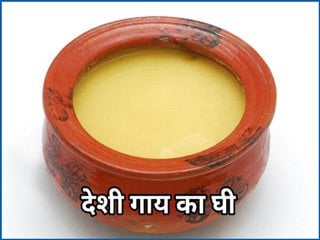 A cow has parental love. She gives milk upon seeing the calf. Drinking her milk increases height as well as love.’ A. Cow’s milk is sattvik and rich in Chaitanya

God Himself has created the cow for the welfare of mankind. Hindus even worship the cow as a Deity. Cow is a sattvik creature and hence, her milk is sattvik and rich in Chaitanya.

B. Drinking cow’s milk leads to purification at the physical and spiritual level

Those who drink cow’s milk become sattvik in nature. They also experience relief from stress and experience calmness. The vibrations of Shakti in milk destroy the Raja–Tama components in the body, mind and intellect of individuals who drink it, thus purifying them at the physical and spiritual level.

1. Unboiled milk : Raja–Tama vibrations from the environment get attracted to the cow’s milk and hence, there is some amount of Raja–Tama in the milk that is not boiled.

2. Boiled milk : Tejtattva activated during the boiling of milk destroys the Raja–Tama in it.

2. Why is it better to drink cow’s milk and not buffalo’s milk?

It is said that, Cow is affectionate, whereas buffalo is selfish ! ‘Buffalo gives milk only when offered fodder. Drinking buffalo milk increases weight. A cow has parental love. She gives milk upon seeing the calf. Drinking her milk increases height as well as love.’

A. ‘Hindu Dharma considers cow to be a very Holy animal because ghee made from cow’s milk is very sattvik.

B. Cow’s milk acts as a medium for attracting the sagun source of Deities from the universe. The manifest functional energy of Deities can act through the medium of milk.

3. Why items made from processed milk (especially

those prepared by turning the milk sour) should not be eaten?

‘Milk is considered to be the source of sagun–Chaitanya and hence, is a complete food. That ingredient which functions through the medium of Sattva component for the welfare of others is called sattvik. Since milk is sattvik, intentionally turning the milk sour amounts to accumulation of the Raja–Tama predominant foreign ingredients and destruction of the ingredient that functions through the medium of sattvikta. Such food items without the Sattva component prepared by turning the milk sour are harmful for the body. Eating these congregates distressing vibrations in the body, and it becomes an invitation to many diseases. Therefore, items that are harmful to life should be avoided; else, one has to face distress due to negative energies working subtly through the medium of these contaminated waves on a large scale.’ – H.H. [Mrs] Anjali Gadgil

4. Subtle-characteristics of ghee made from the milk of a Bharatiya cow 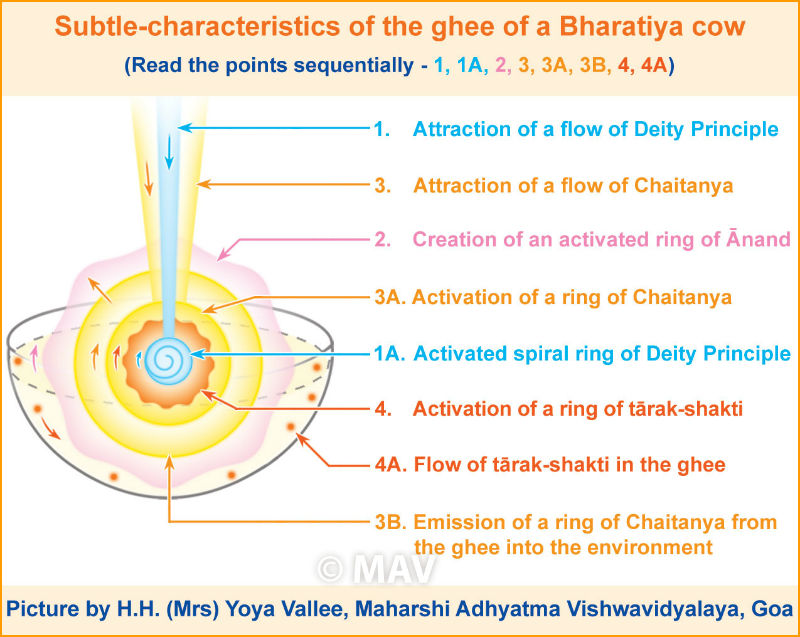 1. I had a good spiritual experience of sagun Principle upon smelling fragrance of ghee made from the cow’s milk of Bharatiya breed.

2. Subtle-knowledge based observations upon seeing a picture of cow of Bharatiya breed : This cow is in the company of many Deities for ages and hence, is most sattvik. Since God has made her sattvik, positive vibrations are attracted to her. This cow has Deity Principle in her. Milk and cow-dung of this cow is most sattvik.

5. Subtle-characteristics of ghee from the

milk of a jersey cow, a buffalo and a cow of Bharatiya breed

1. Since the basic nature of different cows varies, the vibrations in the ghee prepared from their milk also vary.

2. Ghee made from the milk of a Bharatiya breed cow is most sattvik. Its consumption does not harm the body.

Granular ghee is pure form of ghee, its functional importance and sagun-nirgun states in the process of its creation

A. Purity of ghee is determined by its granular nature.

B. Since the Tej in butter merges with nirgun in the universe, innumerable gaseous subtle-voids are generated during the preparation of ghee from butter.

C. If ghee is correctly prepared, these voids impart separate functional existence to every grain of ghee that is predominant in Tej. This further enhances the granularity of ghee. The subtle Vayutattva-form voids between two grains of ghee function in the nirgun state, whereas every granule of ghee that is based on
the congregation principle, functions on a sagun scale at the level of Tej.

D. Greater the purity of ghee used in oblations during a Yadnya, greater is the proportion of Chaitanya in the Principles of Deities that descend on the earth; therefore, it is very important to use pure and good ingredients during rituals like Yadnya.

E. Using inferior quality ingredients for oblations in a Yadyna leads to generation of significant distressing vibrations in environment. It increases the extent of attraction of negative energies to the ritual and transforms it into a destructive and sinful karma.’

A. Subtle-characteristics of processed butter

1. Processed butter available in market is made in a manner that people enjoy its taste. Therefore, illusory vibrations are generated in it and as a result, people not only get attracted towards the processed butter but also develop a liking for it.

2. Such butter lacks in sattvikta and hence, Divine Shakti and Chaitanya do not get attracted to it.

3. Proportion of positive or negative vibrations in the processed butter depends on the milk used in its preparation, proportion of chemicals and the country in which it is manufactured.’

B. What is more beneficial to use – butter or Ghee?

There is just one method of preparing cheese; however, processes of solidification and preservation are different.

A. Cheese is made from the milk of goat or jersey cow. Distressing energy is present to a greater extent in cheese made from goat’s milk than that made from jersey cow’s milk.

B. In Bharat, consumption of processed cheese is more.

C. Fresh cheese perishes in 3 to 7 days; hence, it has to be consumed quickly.’