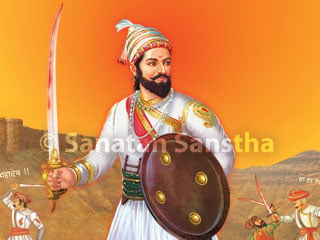 1. Shivaji Maharaj a foremost Commander of his times

Aurangzeb was overjoyed to learn of Shivaji Maharaj’s demise. With the great Captain no more, Aurangzeb found it easier to pursue his dream of ruling over the entire subcontinent. He is to have said “My armies have been employed against him for nineteen years and nevertheless his (Shivaji Maharaj’s) state has always been increasing.”

B. Intelligent and Expert in Defence Strategy ! – Portuguese governor

Antonio Pais de sande, Interim Governor of Portuguese India forwarded a report about the war between Shivaji Maharaj and Mughals to the colonial affairs council in Portugal. ‘Shivaji Maharaj has captured territory from Goa to Daman, which is close to our borders. Presently he is involved in war with Mughals. This present day Attila of Hindustan is so intelligent and and adept in defence strategy, that he handles both defence and offence with the same expertise. His horsemen (cavalry) have wrecked havoc in Mughal territory.

C. Shivaji Maharaj is at par with Sartorious, Hannibal, Alexander, Julius Caesar (all were renowned Commanders) ! – Portuguese and British contemporaries.

2. Extensive knowledge about the battle-field

What was extraordinary about Shivaji Maharaj ? The first and most important thing was that he had extensive knowledge about the area where he was to fight battles. He knew every mountain, hillock, river, rivulet, fort and valley in the Deccan area like the back of his hand. His soldiers had detailed maps of the terrain..

Shivaji Maharaj had a very competent espionage system for obtaining information. Though most have remained unnamed, some known spies are Vishvasrao Nanaji Dige, Bahirji Naik, Sunderji Prabhuji. Contemporary British travellers have noted about meeting Shivaji Maharaj’s spies in Bihar. Bahirji Naik had mapped out the entire city of Surat to facilitate Shivaji Maharaj’s plunder of the Mughal city in 1664. Bahirji’s information on the massive wealth and riches stored in Surat prompted Shivaji Maharaj to attack the city and humiliate the Mughals.

Fourth item is the Treasury ! It takes a lot of money to maintain an army, to feed the soldiers, to arm them and also protect the forts. Surat like cities where mughal wealth was hoarded were looted. Shivaji Maharaj levied taxes like Chauthai and Gaokhandi. There are records of Gaokhandi tax being levied on Bardesh near Goa. Shivaji Maharaj had a very strong economical policy.

Shivaji Maharaj had a spirited army. Considering the terrain they had to fight in, there was no place for large animals like the elephant. Rowdy elements were forbidden from joining the army. Cavalry was employed to plunder enemy territory. The army relied heavily on speed and agility to advance.

Shivaji Maharaj’s strategy was based on taking the enemy by surprise. The epitome of this form of attack was seen in the raid against Shaista Khan. Shaista Khan (Aurangazeb’s uncle) was camped in Pune with a 100,000 strong army for 3 years. After Shivaji Maharaj’s attack, a disgraced Shahista Khan retreated to Aurangabad within three days.

Shivaji Maharaj’s army was adept in what is known as ‘Guerrilla warfare’. The army used unusual and out of the box ways to fight the enemy treacherous terrain. ‘Ganim’ is an Arabic word meaning ‘plunderer’. Shivaji Maharaj followed same technique of plunderers who would appear out of nowhere, loot and escape. Hence Dennis Kincaid called him ‘The Grand Rebel’.

A. Principles of Guerrilla Warfare

Principles of Guerrilla attacks followed by Shivaji Maharaj’s army were – sudden raid with minimum loss and maximum yield or maximum possible damage to the enemy. Though Shivaji Maharaj followed these guerrilla tactics on a large scale Shahaji was the one to promote them!

Alamgir’s Deccan Subhedar, also his cousin, Bahadur Zafar Jhan Kokaltash was given a taste of Marathi wisdom by Shivaji Maharaj. Bahadur Khan was staying in a fort 48 miles away from Pune on the banks of river Bhima. Shivaji Maharaj got the information that he was had 200 Arabian horses and wealth of one crore rupees as an offering to the Emperor. The spies had done their job well, and all that remained was to attack and plunder. Shivaji Maharaj planned the strategy. An army of 9000 soldiers was deployed under an expert commander towards Pedgaon – though his name is unknown, it may have been Hambirrao Mohite. He played a novel trick by dividing the army in two groups – one comprising of 2000 soldiers proceeded towards Bahadurgad. When Bahadur Khan came to know that Maratha Army is attacking his camp, he ordered his army to be ready. A fully armed Mughal Army started in the direction of Maratha Army, which immediately dispersed in a different direction. The Maratha army which was hotly pursued by the Bahadur Khan led Mughals, diverted the Mughals far away. Immediately on receipt of news from spies about Bahadur Khan being far away the second group comprising of 7000 soldiers invaded Bahadurgad The Mughals left in the fort could not resist this attack. The Maratha army plundered wealth amounting to Rs.One crore and 200 Arabian horses. The camp at Pedgaon was set on fire by Marathas. The expenditure on coronation ceremony of Shivaji Maharaj was compensated from this wealth.

Towards the end of August 1689 A.D. Shivaji Maharaj sent Mainak Bhandari to the Khanderi island near Alibagh. When the sea was rough with high tides Mainak started construction of Khanderikar Fort. Khanderi and Underi islands are situated opposite to Thal in Ashtagiri. The British who wanted to dissuade the Marathas from building the fort sent Capt. William Minchin with frigates Hunter and Revenge and guraba. Small boats of Marathas used to transport foodgrain and daily needs from Port Thal to the island.

Capt. Adderton, Richard Keigwin, Francis Thorpe, Henry Welch, John Bradbury and other sailors of renown were sent along with Minchin. Compared to the British, the Marathas were having detailed knowledge about wind direction, tide timings, the sea depth from Thal to Khanderi. The large British ships could not navigate in these waters. Minchin learned that the small agile boats would transport foodstuff and people from the mainland under the cover of darkness. In one of his letters to Mumbai he conveyed that ‘These small agile boats of Marathas deceive us in miraculous way, (they) should be deployed in our Navy’. Coming from the same British who later claimed that ‘Britannia rules the waves’, this statement proves the superiority of Shivaji Maharaj’s Naval forces. Later on in the vicinity of Khanderi , Maratha Naval Chief, Daulat Khan, suddenly attacked and captured the frigate Dove, guraba and detained all Britishers on Sagargad. The British lost a lot of men and ships.

C. Shivaji Maharaj was imprisoned yet Aurangzeb was afraid of him !

When Shivaji Maharaj was imprisoned at Agra, Aurangzeb would travel to the Jama Mosque opposite Agra Fort under heavy guard. The people were perplexed about this overcautious nature of Aurangzeb. However, a letter in Rajasthani mentions that Aurangzeb was afraid of Shivaji Maharaj, hence went about with guards.

D. Invincible Fighter, Friend of the virtuous and Patron of religions !

E. Shivaji Maharaj’s commandership was the spirit of his Army !

Robert Arm has said, ‘Shivaji Maharaj was endowed with all the qualities necessary to be an able commander. He would not hesitate to spend money to secure detailed information about his enemies. With courage and skill he was able to overcome calamitous situations. He was the foremost Commander of his times. The vision of Shivaji Maharaj leading an attack with his sword in hand was the sole inspiration his army needed. His commandership was the spirit of his army.