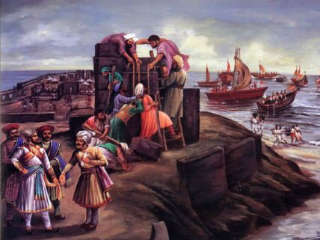 India is blessed with thousands of miles of coastline. A thousand years ago, the Chola Kings from South India, assisted by their superior Naval forces dominated east-Asian nations – Malaysia, Indonesia, Cambodia etc. and were successful in spreading the fragrance of Indian culture. One of the biggest Hindu temples in the world at Angkor Wat in Cambodia is influenced from Indian architecture. Subsequently this deep connection with the sea was lost and so was the naval supremacy. Later seafaring nations use the same seas to subjugate our country.

Trade to India was mainly conducted via the Khyber and Bolan passes. When this stopped, Vasco-da-Gama, a Portuguese sailor tried to find a sea route to India and landed in the Calicut port in 1498. Later on the Portuguese, British, Dutch, and French arrived in the name of trade and colonised parts of India. Subsequently, for protecting these colonies, they constructed Forts, Sea-forts, established independent Naval bases and slowly started asserting their rule over India. Those in power condoned and even encouraged religious conversion, most times while committing atrocities against the Hindu natives.

In the same way the Siddis/Habshis who were brought from Africa to Indian shores as slaves established their control over the Janjira area on the Konkan coast. These foreign powers had strong Sea-forts as well as powerful navies. Not a single kingdom took into consideration the future danger from the enemy and made efforts to develop their naval base or constructing sea-forts. Those Mughal rulers who were fashioned themselves as ‘Emperors’ of India had to rely on the mercy of European navies to navigate the seas.

With the seas being controlled by foreigners, hundreds of years ago Chhatrapati Shivaji established his own naval base and constructed many impenetrable Sea-forts along the Konkan coastline. By regularly defeating Siddis of Janjira and other foreign rulers like the Portuguese, British, Dutch Shivaji protected his territory from the foreigners.

Preparation for Construction of Sindhudurg ! 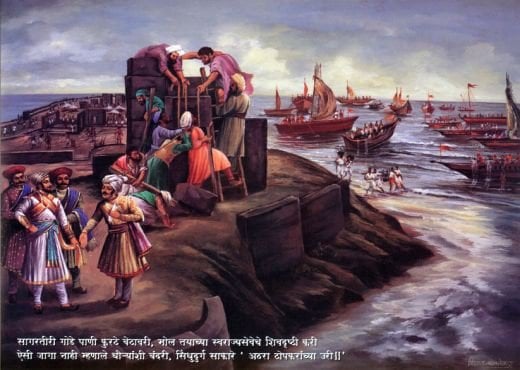 In the year 1657 Shivaji invaded Konkan and captured Kalyan and Bhivandi. After taking possession of the enemy’s boats, he established his own dockyard for manufacturing new warships where he employed Portuguese and other European craftsmen too. Their knowledge helped build ships with prevalent European technology.

The court scribe has recorded that – Shivaji constructed a number of forts on different hillocks along the seashores. He managed to get control over sea by constructing innumerable forts on island chains and securing modern boats. He had a fleet of 200 ships consisting of warships of various capacities like guraba, tarandi, tarak, galbate, shibade etc. There were two admirals – one being Daria Sarang, a Muslim and other Mai Nayak Bhandari. They destroyed the ships of Siddi. Shivaji fought with 27 enemies including the Mughals, English, Dutch at different places and raised a Naval base in the sea.

The impenetrable ‘Janjire-Mehruba’ fort of the Siddis was a big challenge to the ambition of Shivaji who was well aware of the importance of sea-forts. After detailed study, Shivaji decided to construct a unique sea-fort on Kurte island near Malvan. As per Shivaji’s view no such spot is available amongst 84 ports. It was the exceptional commander in Shivaji who could understand the importance of this place. This spot being good for controlling the sea, he decided to construct a new Janjira fort here.

Janbhat Abhyankar, a priest well-versed in the Vedas from Malvan was invited to find an appropriate auspicious day for laying foundation and Margshirsha Shukla Paksha Dwitiya, Shake 1586 i.e. 25th November 1664 was selected. The auspicious ceremony of worshipping sea, offering of a golden coconut as also laying the foundation stone was performed at the hands of Shivaji. The wealth from Surat was spent on construction of this sea-fort. Thousands of masons, stone-breakers, blacksmiths, carpenters, sculptors and labourers under the guidance of expert architects were engaged day and night. To fend enemies, 2000 Mawalas were stationed to guard the site. Apart from giving necessary instructions, Shivaji was personally looking after supply of materials.

Maharaj writes in one of his letters, My full concentration is on Sindhudurg, all work should be perfect, foundation should be proper, arrangements are in order for the lead to be used in the foundation, possession of material to be taken after checking and weighing, use the sand only after washing. Will send limestone, report everyday progress, get problems solved and always be vigilant.

This letter shows Shivaji Maharaj’s precision as well as management skills. On the basis of available note, construction work of Sindhudurg fort was completed on Chaitra Shukla Paksha Pournima, Shake 1589 i.e. 29th March, 1667. Shivaji was personally present during the Vastushanti ceremony. On the occasion of Shivaji’s arrival, sounding of cannons and distribution of sugar was arranged. Apart from giving generous rewards to all involved, Shivaji awarded gold/silver bracelets for exceptional achievements.

Sea Capital of the Hindavi Swarajya !

Shivaji also constructed sea-forts at Rajkot, Sadkokot, Khanderi, Colaba, Sukarnadurg, and after total renovation of Vijaydurg, brought the whole stretch of Konkan shoreline under his jurisdiction. Sindhudurg is fortified up to 4 kilometres and made invincible by 42 bastions. The height of fortification is 10 meters and there are 45 staircases. 40 toilets are provided to Security Guards. Main entrance of the fort resembles Cow’s Mouth (Gaumukh).

Some mason with great foresight, has preserved the impressions of Shivaji’s palms and feet in lime. These stand testament to the great King who naval exploits put fear into the invaders’ hearts.

In the absence of proper care, this heritage of Shivaji’s achievement is becoming destroyed. Neither the government nor those who indulge in politics in the Chhatrapati’s name seem to care.