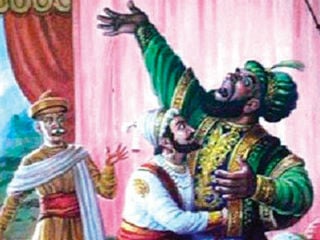 The slaying of Afzalkhan remains one of the riskiest but equally thrilling episodes from Chatrapati Shivaji Maharaj’s eventful life. The conduct of Shivaji Maharaj while preparing for and during event tallies with the teachings given in Kautilya’s ‘Arthashastra’. 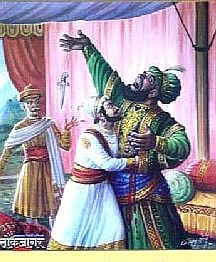 1. The annexation of Jawali from the traitor ChandraRao

Jawali was geographically and politically a very important place in the life of Shivaji Maharaj. Thick jungles served as armour for Jawali which was located in a valley with Sahyadris on one side and the Mahabaleshwar mountain on the other. Shivaji Maharaj had made an entry into the local politics (of Jawali) by backing Krushnaji Baji for the position of ‘Chandrarao’. Anticipating expansionist policy of Shivaji Maharaj the Adil Shah of Bijapur had already appointed Afzal Khan as the ‘Subedar’ of Wai in 1649. Subsequently, after several political twists and turns, Adil Shah had recalled Afzal Khan from Wai in 1655 and sent him on a campaign in Karnataka. Later, by 1656 Chandrarao forgot Shuvaji Mahraj’s favours and started plundering in his territory. Shivaji Maharaj’s attempts to rein him in did not bear desired results. On January 15, 1656 Shivaji Maharaj launched a campaign, annexed Jawali and later executed Chandrarao in August (same year). Thus Jawali became a part of Shivaji Maharaj’s kingdom.

Shivaji Maharaj built the fort Pratapgad on the ‘Bhorpya’ mountain located west of Mahabaleshwar. Pratapgad, true to it’s name as Valour Fort, was to witness a great and dramatic battle. The ‘Badi Begum’ (of Bijapur) appointed the religious fanatic, highly valorous but cruel and egotistic Afzal Khan who was ferociously loyal to Bijapur as the campaign chief for getting rid of Shivaji Maharaj. The large ego of Khan was clearly visible even in his seal which read ‘If the high heavens would like to compare the greatness of great people and greatness of Afzal Khan then the winds will echo chants of ‘Afzal – Afzal’.
Afzal Khan’s ego was not without basis. In a battle near Bidar-Kalyani (in Karnataka) he was instrumental in getting even Aurangzeb arrested. Aurangzeb extricated himself from his clutches by befriending Khan Muhammad. Furious at this turn of events, Afzal Khan abandoned the campaign and returned to Bijapur. To assuage his feelings the Badi Begum recalled Khan Muhammad and got him killed as he entered Bijapur. Afzal Khan had many such feats to his ‘credit’. He nurtured hatred towards the Bhosle clan. He was the one who had taken Shahaji (Shivaji Maharaj’s father) prisoner and brought him to Bijapur in chains. He was also responsible for killing Shahaji’s brother Sambhaji.

Khan started the campaign against Shivaji Maharaj in April 1659. It is said that Afzal Khan had met his spiritual Guru before launching the campaign to seek his blessings. However, the Guru had a vision of headless body of Afzal Khan. He had not bestowed his blessings on Khan warning him of failure instead. Due to this, Afzal Khan drowned in worry and despair. He spent several days in his harem indulging in pleasures and on the last day killed all those women. (Sources: ‘Vedh Mahamanavacha’ by Dr Shrinivas Samant, page 72, ‘Shivaji – His life and time’ by G B Mehendale, page 201) This throws light on the mental state of Afzal Khan at the start of this campaign.

3. Shivaji lived the teachings of Kautilya !

Afzal Khan’s first stop was in Torve near Bijapur where he faced his first bad omen. The elephant carrying his flag named ‘fatehlashkar’ suddenly died. Adil Shah sent a replacement immediately. The campaign continued but it can be easily gauged as to what effect this must have had on the morale of his army who had strong beliefs in (good and bad) omens. On the other side, Shivaji Maharaj lost his wife on September 5, 1659 (Bhadrapad Krushna paksha Chaturdashi). This would have been viewed as even worse omen. However, Shivaji Maharaj followed Kautilya’s policy of keeping his personal life and kingly duties separate. He had greater faith in determination, (accurate assessment of) location and time and individual efforts than on omens.

While fighting with Afzal Khan Shivaji Maharaj resorted to ‘Mantra-Yuddha’ i.e., war of nerves. While Afzal Khan was facing bad omens, Shivaji Maharaj had a good omen. He had a message from none less than Goddess Bhavani in his dream who ordered him to go for a fight to the finish and who also assured him that She will be with him leaving behind her abode at Tuljapur.
(‘Anupuran’ by Kavindra Paramananda, ‘Sabhasadachi Bakhar’, quoted ‘Shri Chhatrapati Shivaji Maharaj (First Half)’ by V S Bendre pages 189 and 175 respectively).

As per ‘Sabhasadkar’, although Shivaji Maharaj made his intention to eliminate Afzal Khan clear to Jijamata, Gomaji Naik Pansambal, Krushnaji Naik Hanki, Moropant, Nilopant and Netaji Palkar by narrating this divine dream it seems they still had doubts about the success of such a venture. On this Shivaji Maharaj used the last resort. He said that an attempt to buy peace will surely result in death but a decision to fight to the finish holds the possibility (however remote) of success. Also, failure in such a venture will amount to martyrdom and glory. After this, Shivaji Maharaj made arrangements for carrying forward his mission in the event of his death and sealed his decision to fight to the finish.

Kautilya has repeatedly explained as to how to obtain divine support in his famous treatise ‘Artha Shastra’. Says Kautilya ‘If one needs to capture the capital of the enemy one should declare one’s omniscience and ability to communicate with deities thereby emboldening one’s own forces and demoralising the enemy forces’. Kautilya further states that the conqueror should also spread the word about his omniscience and ability to communicate with deities in his own kingdom through astrologers, seers of omens etc. They should also spread the word in the enemy country about the conqueror’s ability to get divine visions, divine treasures and divine forces. References to these tactics are also present in several other chapters of ‘Artha Shastra’. While granting Shivaji Maharaj’s unflinching faith only in ‘Ishwara’ it can’t be said with certainty that Shivaji Maharaj did not use such tactics.

Subsequently, when it was decided that Khan would be visiting the foothills of Pratapgadh to meet Shivaji Maharaj, Pant (Shivaji Maharaj’s emissary) told Khan that we would get the main road from Wai to Pratapgadh cleaned up as mark of respect. Khan did not suspect any foul play in this suggestion. Shivaji Maharaj got trees on the main road cut (to make way for Khan’s large army). At the same time he used the wood thus obtained to block all the other small pathways (which could have served as escape routes for Khan’s retreating army as it was going to unfold). Kautilya has recommended same tactics against the oncoming enemy army. However, in this case, the enemy had already arrived (up to Wai) and it was necessary to block his escape routes for retreat. Shivaji Mahaaj, thus, made all the necessary preparation to finish the enemy under any eventuality and on the appointed day November 10, 1659 (Thursday, the Hindu year named ‘Vikari’, 1581) at noon eliminated a very strong and powerful enemy of the ‘Hindavi Swarajya’. He also avenged his father’s humiliation and his brother’s death (both caused by Afzal Khan on previous occasions). He earned a victory which was hitherto unheard of. Due to this he inspired awe and fear in his future enemies. He earned a lasting reputation as a brave soldier, smart diplomat and winning personality.
Asawari Bapat (Ref : April 17, 2015)

Shivaji Maharaj makes use of emissaries and spies as recommended by Kautilya in Artha Shastra !
In the war with Afzal Khan two categories were most important – the ‘emissary’ and the ‘spy’. In Artha Shastra, the unique importance of emissary has been described when it comes to a battle of nerves. It says, that once a strategic decision has been taken after due consultation (appropriate) emissary should be appointed (to interact with the enemy).

After deciding to face Afzal Khan personally, Shivaji Maharaj along with his emissary (to Khan) Gopinath Pant took oath. Under oath, Shivaji Maharaj asked Pant the real objective of Afzal Khan. Pant told Maharaj that Khan intended to kill him. Pant also told him that if he was willing to take the risk, Pant would convince Khan to come to Jawali for a meeting. Thus, Gopinath Pant fulfilled all his duties as an emissary as stipulated in ‘Artha Shastra’. In the chapter ‘Dootapranidhih’, which describes the recommended tactics for an emissary while in the enemy camp, Kautilya says that an emissary while being in the enemy camp should write letters, try to gain friends, encourage treachery, abide by the terms of (previous) treaties, create rift between friendly camps, snatch away valuable people and objects etc. (1.16.33-34)

Gopinath Pant brought detailed information about the wealth of the enemy camp. ‘Anupuran’ written by Shri Paramanand gives an interesting account of how this wealth was brought to Pratapgadh. Says Paramanand ‘Shivaji Maharaj pretended that he wanted to treat Afzal Khan and his army as guests for whom he would want to offer appropriate gifts befitting their status’. For this, Maharaj invited the (wealthy) traders accompanying Afzal Khan to the Pratapgadh fort. With Afzal Khan’s permission the traders came to the fort. Shivaji Maharaj offered to purchase their wares at lavish prices. He also requested them to stay at the fort. Blinded by greed, they did not realise that they had been cornered and surrounded atop a mountain. Shivaji Maharaj used the same strategy later, in Agra where Mohammed Amin Khan had informed Aurangzeb that Maharaj had purchased elephants worth 15,000/- but had not made the actual payment till then.

In modern times, the state of affairs makes us wonder whether we have forgotten the importance of espionage as explained by Kautilya. Kautilya describes nine types of espionage agents some of which are institutional and some individual. ‘Artha Shastra’ describes in detail as to how to build a complete espionage agency and under which garbs they should function. Kautilya attaches particular importance to ‘Siddha’, ‘Tapasa’ and ‘Bhikshuka’ (hermits and ascetics) garbs. Among many other things, he recommends that for one piece of information three mutually independent espionage agents should be appointed and they should try to gather the required information as quickly as possible. Kautilya attaches extreme importance to secrecy and hence recommends that the espionage agents should not be in touch with one another in any way (except those working on the same mission as a team).

Shivaji Maharaj’s espionage wing was so secretive that apart from Bahirji Naik, we have very little information about them; even though (it is well-known that) Shivaji Maharaj used to get accurate and quick information about each and every step of the enemy. The importance of espionage was paramount in all campaigns conducted by Shivaji Maharaj. This was also true during the encounter with Afzal Khan. Apart from Bahirji Naik, one more spy was known to be operating in the Afzal Khan’s camp in the garb of a fakir. His name was Nanaji Prabhu Mosegaonkar.