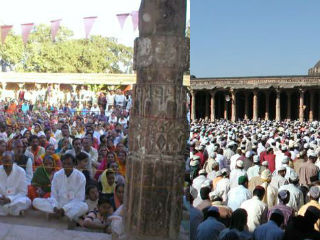 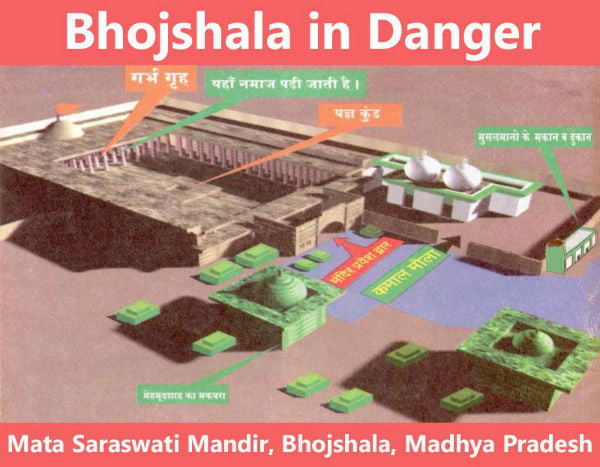 ‘Bhojshala’ is an ancient and the only temple of Mata Saraswati, built by Raja Bhoj in 1034 AD. (‘See Photo Evidences’) Bhojshala was home to thousands of students and scholars and it was main centre of education. Attacks on Bhojshala started from 1305 AD and Muslims built today’s Kamal Moulana dargah near Bhojshala. (‘Read Detailed Timeline of Facts’)

Bhojshala has become victim of Governments of Madhya Pradesh due to appeasement of Muslims for votes. Today Archeological Survey of India (ASI) allows everyone to go inside Bhojshala ‘as a tourist’ with fees. On every Tuesday, Hindus are allowed to enter in Bhojshala and offer flowers and akshata to Saraswati Mata. But since the new idol of Vagdevi is seized by Madhya Pradesh government and kept in Gwalior jail, Hindus can’t offer anything to Saraswati Mata. On every Friday, Muslims are allowed to offer Namaz in Bhojshala complex. Vasant (Basant) Panchami, also known as Mata Saraswati Jayanti is the only day in the year on which Hindus are allowed to perform full-fledge puja by taking idol or photo of Mata Saraswati inside Bhojshala. So Muslims can offer Namaz in Bhojshala 52 times in a year, but Hindus can perform puja only once in a year. It should be noted that Dhar, where Bhojshala is located, has 16 mosques to offer Namaz.

What do you want in Bhojshala on this Vasant Panchami (15th February 2013) – Puja or Namaz ? 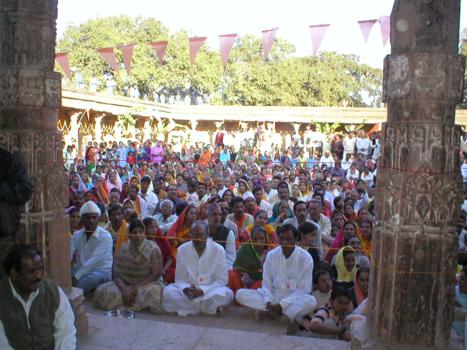 In year 2006, Vasant (Basant) Panchami was on friday, so the demand of the Hindus to perform puja in Bhojshala for the full day was refused and the police also used force against Hindu devotees and arrested many. Now this year 2013, again Vasant (Basant) Panchami happens to be on friday and Hindu Devotees are demanding to perform puja for the whole day and restrict Muslims to offer Namaz in Bhojshala on this day. Also the BJP Govt. should release Vagdevi (Mata Saraswati) idol from Gwalior Jail, which was installed by Hindus in Bhojshala.

O Hindus, take up this challenge and do your duty towards Dharma !Our Demands

Watch Videos about History of Bhojshala and Fight by Hindus