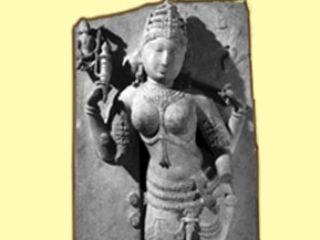 ‘Bhojshala’ is an ancient and the only temple of Mata Saraswati, Goddess of Knowledge and Wisdom. The temple was built in the year of 1034 AD by Raja Bhoj, the mighty Hindu King whose empire stretched from Rajasthan to Odisha and from Madhya Pradesh to Maharashtra. This temple of Mata Saraswati is situated at Dhar district in Madhya Pradesh, which was capital of Raja Bhoj. Bhojshala was home to thousands of students and scholars and it was main centre of education.

Bhojshala was first attacked by infamous and cruel Muslim invader Alauddin Khilji in 1305 AD. After the sacrifices of Hindu king Raja Mahakaldev and his soldiers in the battle, Khilji killed 1200 Hindu students and teachers in Bhojshala as they refused to convert to Islam.

The process of Islamic attack started 36 years back, when a Muslim fakir named Kamal Moulana entered Malwa in 1269 AD. He used treacherous ways and converted many Hindus to Islam. He collected detailed information of Malwa region for 36 years and handed it over to Alauddin Khilji.

In this year, Mehmudshah attacked Bhojshala and tried to convert it into dargah. He encroached land outside Saraswati Temple and built ‘Kamal Moulana Makbara’ after 204 years of death of Kamal Moulana. On this ground only, conspiracy is hatched to prove that Bhojshala is actually a dargah.

1552 AD – Treachery by a Muslim soldier with Hindus

In 1703 AD, Malwa was captured Marathas (Hindus) ending rule of Muslims. In 1826 AD, East India Company defeated Hindus and conquered Malwa. They too attacked Bhojshala and destroyed many monuments and temples.

Today the original idol of Vagdevi (Mata Saraswati) is kept in London Museum. Lord Curzon took away this idol in 1902 AD from Bhojshala and kept it in England.

For the first time after Muslim rule, Muslims tried to offer Namaz by entering into Bhojshala. But this attempt was foiled

by Hindu activists of A

1952 AD – Bhojshala handed over to Archeological Survey of India (ASI)

Central government handed over Bhojshala to ASI in this year. In this same year, activists of RSS and Hindu Mahasabha started awakening Hindus about Bhojshala. Shri Maharaja Bhoj Smruti Vasantotsav Samiti was formed by Hindus.

Padmashri Dr. Vishnu Shridhar Wakankar, a well known archeologist, artist, writer and historian visited London and proved that Vagdevi idol in London was installed by Raja Bhoj in Bhojshala. Then he tried to release this idol by meeting theofficials of London Museum. After returning to India, Dr. Wakankar visited the then Prime Ministers Jawaharlal Nehru in 1961 and Indira Gandhi in 1977, but no one tried to bring back Vagdevi idol in India.

Before 12 March 1997, Hindus were allowed to take darshan, but were not allowed to perform puja. CM Digvijaya Singh issued draconian order allowing Muslims to offer Namaz in Bhojshala on every friday and barred Hindus even from entering Bhojshala. Hind

us were allowed only one day of Vasant Panchami to enter and perform puja in Bhojshala.

As awareness about Bhojshala was increasing in Hindus, more and more devotees started to visit Bhojshala on Vasant Panchami. Due to this fear, so-called seculars and fanatics arranged programs by forwarding the occasion of ‘Birthday of Kamal Moulana’. Government issued order that ‘Hindus can perform puja only up to 1 pm and thereafter Qawwali and other programs will take place’. When Hindu devotees tried to enter Bhojshala, police attacked them brutally and resorted to lathi charge. They did not even spared women. Hindu devotees present there defied all odds and performed Maha-aarti of Mata Saraswati by entering into Bhojshala.

Hindu Jagran Manch vowed to celebrate 2003 Vasant Panchami with full enthusiasm and to free Bhojshala from clutches of fanatics and seculars. Rath Yatras (processions) were carried out in many villages and cities of Dhar district and more than 9 lakh Hindus performed puja in yatra. By fearing such unity and devotion of Hindus, Digvijaya Singh and his government hatched conspiracy to foil Vasant Panchami festival. Police tore and blackened posters creating awareness about Bhojshala. Many camps were arranged by government to woo public. Govt. employees were engaged in unnecessary works. A

ll schools, lodges, hotels, dharmashalas and even vehicles were seized. But defying all odds and obstacles, more than 1 lakh Hindus celebrated Vasant Panchami at Bhojshala on 6 February 2003. Dr. Pravin Togadia addressed Hindu devotees and Hindus warned government to free Bhojshala on 18 February and if this will not happen, then Hindus will free Bhojshala on their own. 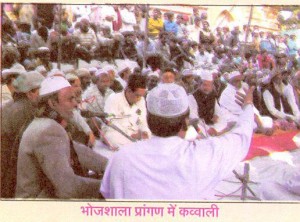 Fearing the warning given by Hindus, Digvijaya Singh imposed section 144 and arrested many Hindu activists on 18 February. Police fired teargas shells and bullets and resorted to lathi charge on Hindu devotees. Even women and children were not spared in the brutal police attack. 23 Hindus were critically injured.

Digvijaya Singh imposed curfew on 19 February also. When Hindu devotees were going towards Bhojshala, they were attacked by police with lathis and police also fired bullets on them. More than 35 Hindus were critically injured and 2 Hindus died due to bullets. Police brutally attacked Hindu men and women arrested and kept in jail and even refused water and medical aid to them. Many Hindu activists were falsely charged under IPC 302, 307 and 436. Hindus in whole Dhar district faced atrocities by government, but did not deter from their devotion.

On 8 April 2003, Digvijaya Singh had to bow before continuous protests by Hindus and Bhojshala was opened for Hindus. The Hindu devotess were allowed darshan everyday and can perform puja only with flower on tuesday.

2006 AD – Betrayal of Hindus by BJP Government of Madhya Pradesh

In 2006, Vasant Panchami came on Friday and hence Hindus demanded to perform puja for full day and Muslims should not offer Namaz on this day. But BJP CM Shivraj Singh Chauhan refused this demand and allowed Muslims to offer Namaz. He ordered to security forces to ‘maintain law and order at any cost’ and forces attacked Hindu devotees trying to enter Bhojshala, while police vehicles ‘dropped’ Muslims at Bhojshala for Namaz. Police resorted to lathi charge and even fired teargas shells on Hindu devotees. Thousands of Hindus were injured in police attacks.

It should be noted that on 31st March 2003, the delegation comprising of Shivraj Singh Chauhan, the then MP, criticised Digvijaya Singh for ‘politising the issue to appease a particular community’ on Bhojshala issue. He also said, “There are so many evidences that Bhojshala is a temple. Even a blind person can identify it as a temple, leave alone others.”

In 2012 AD, this same BJP government of Madhya Pradesh refused Hindu devotees to take out ‘Palkhi Yatra’ of Mata Saraswati and even attacked and arrested Hindu devotees. BJP Govt. also took away newly installed idol of Vagdevi (Mata Saraswati) and kept it in Gwalior Jail. BJP Govt. also arrested Mr. Navalkishore Sharma of Hindu Jagran Manch who was on indefinite hunger strike to allow Hindus to arrange ‘Palkhi Yatra’ and to install idol of Vagdevi again in Bhojshala.