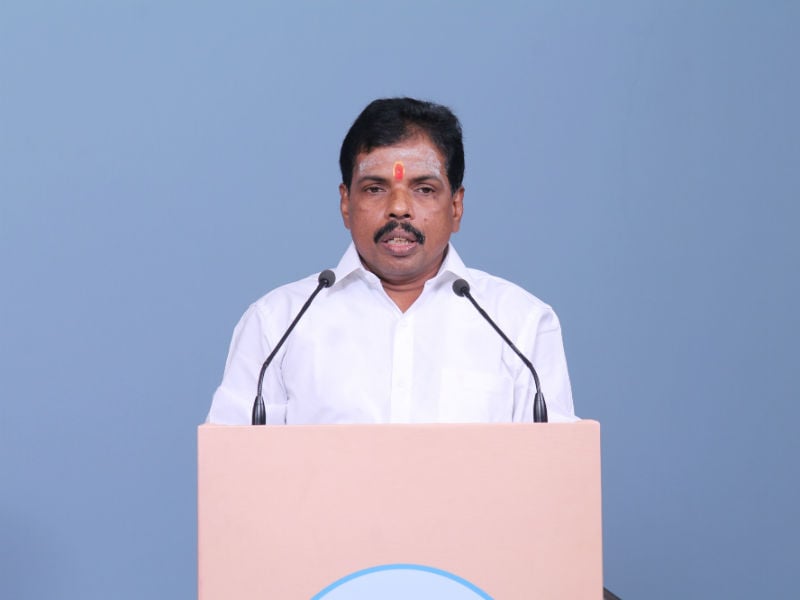 Shri. G. Radhakrushnan, Tamil Nadu State President, Shiv Sena narrated experiences about the disaster-stricken citizens and help extended to them at Chennai. He was speaking in the session on ‘Protection of Nation’ on the fourth day of fifth all-India Hindu Convention. Regarding the power of God experienced by him during that disaster he said, “Thousands of citizens died in natural calamity like tsunami and the deluge which hit Tamil Nadu last year. Millions had to shift to other places. Farmland also bore huge loss. There was no transportation; flights, trains and other vehicles also stopped plying. There were no newspapers. There was filth everywhere and people struck with different diseases. Despite such disaster, we observed few incidents which were beyond our imagination. All buildings and structures were destroyed due to flood and tsunami but temples on sea-beaches and Swami Vivekananda memorial at Kanyakumari were safe. The temples and memorial all were unharmed. We noticed that people in surrounding areas of these temples were alive which could only be God’s play. We were also hit with the floods; still we could manage to carry essential things for the affected people, collected funds for them. Only with God’s grace, we got the strength to even swim across in flood for helping people. With the grace of Shrikrushna, we could experience such spiritual power.”

Shri. G. Radhakrushnan condemned unjust arrest of Sanatan seeker Dr. Virendrasingh Tawade while concluding his speech and said that all ‘Hindutvavadis’ extended support to Sanatan Sanstha and its seekers. (Such ‘Hindutvavadis’ are the true strength of Sanatan ! – Editor, Hindujagruti)