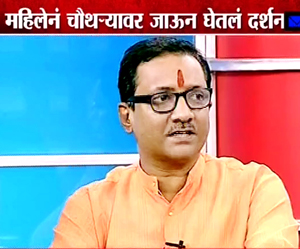 Mumbai : Issue of whether a woman should go to temple or not, needs to be looked at from spiritual and religious angles; but there is no compulsion on anyone in this context. If hemoglobin in blood is to be checked, I am allowed to eat anything; but if ESR in blood is to be checked, I have to fast. Blood is same but its checking method differs depending upon the constituents to be checked; similarly, one has to follow rules of the place, stated Dr. Uday Dhuri, spokesperson of Hindu Janajagruti Samiti (HJS) while expressing his point during a discussion program held on ‘Mi Marathi’ TV channel on the above topic. Besides Dr. Uday Dhuri, Prof. Aruna Pendase, political analyst, Sou. Vidya Chavan, spokesperson of NCP, Shri. Sayaram Bankar, Trustee of Shri. Shani-Shinganapur Temple Trust and Ravindra Ambekar, Editor of this channel were the other participants.