After the barrage of abusive tweets by those bearing Muslims names I am convinced I must get to the core of this PK scam.

Mumbai: In a statement which could stir fresh controversy regarding Aamir Khan starrer ‘PK’, BJP leader Subramanian Swamy questioned the financing of the film on Monday.

Questioning the funding behind the film, Swamy wrote on the micro-blogging site Twitter: “ Who financed the ‘PK’ film? According to my sources it is traceable to Dubai and ISI. DRI must investigate.”

Who financed the PK film? According to my sources it is traceable to Dubai and ISI. DRI must investigate

The Directorate of Revenue Intelligence (DRI) under Customs and Central Excise Department probes economic offences. Aamir Khan starrer ‘PK’ is raking in the moolah at the box office despite making headlines over its content. Several religious groups have protested against the screening of the film and have objected certain content in it. Directed by Rajkumar Hirani and produced by Vidhu Vinod Chopra, ‘PK’ was released on December 19.

The film made headlines ever since its first poster was released. The poster in question had Aamir in nude with a transistor covering its modesty.

Few things that may become evidence of what Dr. Swamy is saying : 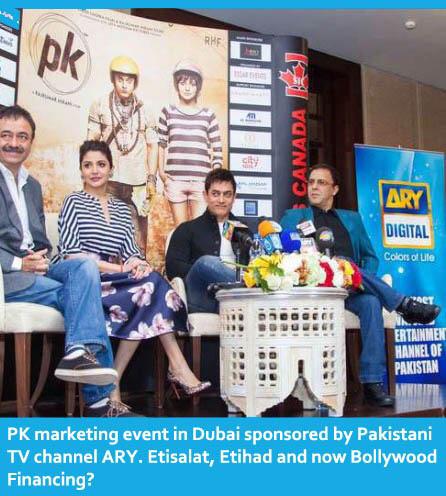 #BoycottPK – Worth Introspecting : A Hindu explains how Amir Khan got the Wrong Number!

‘You must boycott PK movie, if you are a Hindu’

PK : Hindu bashing for Seculars on a comic platter