A Must Read article published by Sanskriti Magazine website

Last evening I posted my views on PK movie based on the reviews of my non political not so religious friends having no biases at all.I had decided that I would not spend my money which goes directly or indirectly to Underworld..but I had to watch it anyhow so that the stand I took gets verified, movie was readily available on internet to be viewed online. First half an hour was awesome, though idol worshiping was cursed heavily but I still loved the theme because of my core spiritual Hindu ethos. I almost felt that I should delete two of my previous posts which ridiculed this movie. But wait, there was much more to the movie which went completely undigested and hence comes the intentions under scrutiny, a design much beyond the scope and thought process of ‘ordinary janta‘. Few points to substantiate :-

1. It was shown that a temple priest forces open the wallet of Anushka, takes money out of it and drops into the donation box.

Now, people may comment on this post and enlighten me if they have had any such experience in any of the temple anywhere in world ? It seemed as if script-writer had put huge efforts to find something out of Hinduism which could be portrayed negative. In my life so far, I have met with priests who are the most under paid class of utmost polite people doing their service round the clock in temple, showing them in this utter stupid manner not only shows entire religion in bad light but disillusions people from their faith. 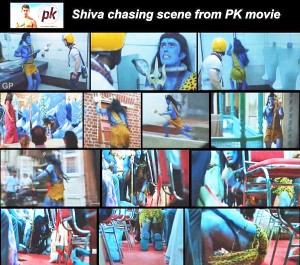 2. It was shown that people blindly following Godmen (Babas), and that they donate heavily to them for temple construction etc.

I would like to ask the enlightened janta here that what right we have to question or mock an ordinary man who spends his hard earned money anywhere he wishes ? In this case, he goes to a baba (howsoever fraud he is ) devotes some time for prayers, bhajans etc, what harm is he doing to society at large ? Is he spreading violence ? Is he learning to operate AK 47 ? tell me what is he doing which this film fraternity is so disturbed about ? He too has all the freedom to invest his money and time anywhere exactly the way rich urban class has the privilege to invest their money in a 4000 bucks bottle of tequila. For how long this “handholding” by one superior class to other inferior class of people will go on in this country ? The other aspect about money donation is very interesting, as the sole topic has been targeted in numerous movies, and the point is, is this some kind of “jealousy” bollywood feels that the money which should have been routed to them is going to these Babas who indirectly have become pillar strength of Hinduism strengthening the self respect of gullible Hindus in towns and villages protecting them from Jehadi and Missionary forces ?

3. Serving fodder to Cows was shown as some backward minded act.

If you can invest thousands of rupees on feeding your imported breed dog, why can’t you serve an animal which is hundreds time more productive than dog ? Looked like it was a loserish attempt by the script writer to dig out something stretching his imagination beyond the limit.

4. People would counter me that this movie has shown dark sides of all religions so the point which I am raising holds invalid.

I watched the movie online and its duration was 130 minutes ? I counted those scenes and the duration, they did not even come close to 3 minutes ? So in a way you make an ill designed ill intended movie which 98 % of the time shows a specific faith in bad light and serves 1 % to other faiths as well to skip Censor board ? And obviously get an OK certificate from the elite secular Hindus ?

5. It was mocked of Hindus who visit shrines or holy places thousands of kilometer away from their homes

We all remember it, just last year Amir khan went along with his mother to Mecca to offer pilgrimage.So why do you preach something which you yourself cant practice ? What is the problem here ? Unsolicited Handholding hunhh ?

All the time during the movie, this particular topic was mocked upon. We all know which religion mocks idol worship (butparasti ?), one should remember that we Hindus celebrate both the types of worship, that is, with form (sakar) and without form (nirakar), so declaring idol worshiping as some form of backwardness or a myth comes under the most objectionable content of this film. Than Aamir says “jo dar gaya vo mandir gaya”, now imagine our modern Hindu kids, they anyways feel shy of following their tradition or visiting temple, and than you serve them such progressive movies, completely detaching them from their dharma, imagine the void it will create in future and how the “market forces” would utilize such a void. 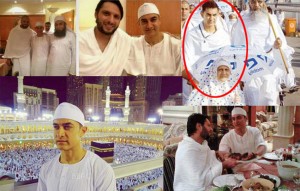 7. Love Jehad was mocked and termed as imaginary.

Multiple intelligence reports as well as Hon’ble high court of Kerala have vindicated this trend of Love Jehad, thousads of such cases have been reported and proven but still some film makers want us to believe otherwise for the reasons unknown. If I talk about Aamir khan, he himself is a soft Love Jehadi because he married two Hindu girls and still on the record claims that his kids would follow Islam ? Why this discretion Aamir ? Why don’t you give your kids a freedom to choose their own faith ? This is what is primitive form of Love Jehad people have been talking about.

8. I would be countered that “come on this is just an entertainer film, don’t take it too seriously”

9. I would be countered that “are our sentiments so weak to be hurt anywhere and everywhere”.

This is the most disgusting statement I ever hear from people, an enemy is demolishing your fort brick by brick and as you react after every demolished brick , they would challenge you , they would remind you of your strength and this way you would be forced to keep quiet, foolish of us, isn’t it ? I agree, for ordinary masses, the theme of this movie sounds philosophical / spiritual but one thing to remember, religions world over because of their sheer political importance have turned out to be a tug of war in a way, every brick demolished weakens our future as an integral nation. While Islam grew world over by the power of sword, Christianity grew by the power of money and conversions, but ever wondered why did they grow ? what was the objective ? The simple answer is to attain political dominance, to bring back the lost “colonies” in the form of population dominance and subsequently dominance over governments. As the secular Hindus forget this political importance of their religion, as they let go their heritage, beliefs and traditions, they must be ready to see their kids live under either sharia or church because trap is ready for them to be poached.

In last, two major scenes which made my opinion concrete about this film, a train blast scene where I was expecting that the other side of the story would be shown but alas, it was totally skipped and not even the name of any terrorist group was mentioned ? wow..what a neutral and secular way of writing a script ? Second, We were forced fed that “trust a Pakistani but not a Baba” and this climax scene made my job easy as it spoke volumes about the target, intent and design behind this movie. The poison this film carries is summed up in this single dialogue of Aamir ” jo dar gaya vo mandir gaya” !!

Still, few of the self hating Hindus would love this film rather are loving it…because as Tarek Fateh once said “secularism exists in India because Hindus are the majority”, though it was said with a respect towards Hinduism but with different perspectives I always prefer it to be a satire on coward foolish and self loathing Hindus.