Shriram’s main activity in the afternoon was to sit with Sita and drink wine. the author was heard saying that this is what the documents state. KS Bhagwan made the comments while speaking at an event in Mandya, Karnataka.

K S Bhagwan displays his intellectual bankruptcy yet again. His sole aim in life seems to be in the news by denigrating Hindu faith.

It is high time that the @CMofKarnataka clamped down on Bhagwan & his ilk. We demand immediate & stringent action against him. #Arrest_KSBhagwan pic.twitter.com/GKcUFanKz6

#ksbhagwan on conditional #bail for derogatory comments against #Rama and #Krishna, the court had refrained him from making such comments.

Our request is to cancel his bail & arrest him immediately. @HMOKarnataka@DgpKarnataka@BlrCityPolice@BSBommai#Arrest_KSBhagwan pic.twitter.com/hXyeA13wG3

K.S Bhagwan who is on bail for his offensive remarks on Sri Ram Mandir has once again hurt the sentiments of crores of Hindus by his remarks on Prabhu Shri Ram

This is not the first time that the writer has expressed objectionable opinions about Lord Ram. In December 2018, he stirred up a controversy after claiming that according to Valmiki Ramayan, God Shriram used to drink ‘intoxicants’ and made Sita consume them too. In his book “Rama Mandira Yake Beda,” he made these comments.

Following his comments, some Hindu organisations launched a protest against KS Bhagwan and tried to hold a puja outside the controversial writer’s residence in Kuvempunagar.

Back then, KM Nishant, a member of a Hindu rights group had told the Times of India that the Uttar Kaand was added later on in the Valmiki Ramayana and that it was not composed by Sage Valmiki.

“In his book Rama Mandira Yake Beda, KS Bhagwan quotes verses from Uttar Kaand, the concluding chapter of Valmiki’s Ramayana. However, Bhagwan should be aware that Hindus disagree with Uttar Kaand because we believe Valmiki did not write the chapter. There is no mention of Uttar Kaand in any of the 24,000 slokas that make up the Ramayana,” Nishant told Times of India.

It is notable that those arguing that God Shriram used to consume meat and liquor often quote this shloka from Valmiki Ramayana’s Sundarkand:

Those claiming that God Shriram used to consume alcohol and meat interpret this shloka as He (God Shriram) is not eating meat anymore, nor indulging in liquor (not even spiritual liquor) and he is just eating the fruits available from the forest. 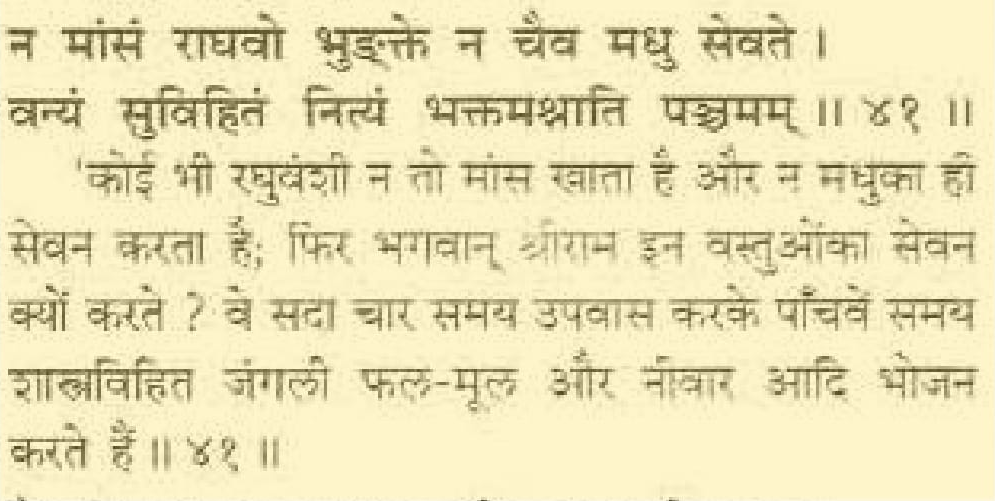 However, the Gita Press publication clarifies that the shloka actually means that it is a sin for any Raghuvanshi (including God Shriram) to consume meat or alcohol. Then why would God Shriram consume these things? God Shriram in accordance with the Shastras used to eat fruits available in the forest.

Ordinary Indian society is strong and theistic. The Indian Constitution indicates respect for the religious beliefs of every citizen; But today openly disrespecting the deities by distorted and malicious writings in relation to the deities has increased to a great extent. Through this, discontent is being spread among the majority believer-rich Hindu society. Due to this, the faith of some citizens in the deity and religion may be reduced or their religious sentiments are being hurt.

Disrespecting the gods has now become a fad. Probably it has become a criterion for calling one secular. As a result, intolerance is increasing in the society. Apart from Hindus, other religions being very aware, such incidents rarely happen in relation to them. And even if something happens, the police intervenes immediately; But in relation to Hindus, action does not appear to be taking place when something like this happens. That is why the anti-Hindu religions, atheists, communists etc. are trampling the religious sentiments of common Hindus under their feet by doing this regularly. This is extremely serious.

On this background, there seems to be a need for strict laws to maintain social peace, religious harmony, law and order in India against those who disrespect the Gods. That is why we are demanding that an ‘Anti-Blasphemy Law’ should be made in this context to take strict action against the culprits.