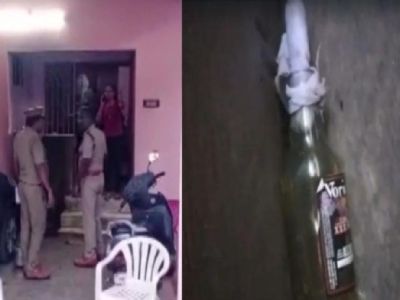 On Saturday, a petrol bomb was thrown at the house of an RSS leader near Tambaram, Chennai in the early hours of Saturday. No casualties were reported in the incident. This is the third time in 24 hours that petrol bombs have been hurled at RSS workers.

“At 4 a.m., we heard a loud sound and realised that there was a fire outside,” Sitaraman explained. “We suspected a short circuit, but it was not the case. We extinguished the fire and called the police. The CCTV footage of the accused has been handed over to the police,” Seetharaman told ANI.

Tamil Nadu | At around 4 am, we heard a loud sound and saw fire outside. We thought it to be a short circuit but it wasn't the case. We doused the fire and called police officials. They got the footage of the accused, says Seetharaman on whose house petrol bombs were hurled pic.twitter.com/uSf25KPHl9

Ever since the NIA and ED have conducted nationwide raids and arrested several Popular Front of India (PFI) leaders, there has been no end to violence across the country.

The PFI called for a ‘Kerala Bandh’ on Friday to protest the NIA’s statewide raids and arrests in the terror funding case.

On Friday, several cases of stone pelting were reported in Kerala. Two lorries, as well as the windshields of two Kerala State Road Transport Corporation (KSRTC) vehicles, were destroyed.

Kannur, Kerala | During the strike protesting the arrest of the Popular Front of India's leaders by NIA, a petrol bomb was hurled by two persons at the RSS office in Mattannur; police probe underway pic.twitter.com/3FQCSUgAgS

The Kerala High Court filed a suo moto charge on Friday against members of the Popular Front of India (PFI) for illegally calling a one-day statewide bandh in the state and inciting violence. Hartal had previously been forbidden, and the court stated that harm to public property could not be condoned.