Bhopal (MP) – At present just 10% Hindus are awakened. Hence to awaken the remaining 90% about Hindu Rashtra is their responsibility. We need Hindus abiding by Dharma and doing sadhana (Spiritual practice) and active with respect to Dharma and Rashtra. In the battle of Dharma and Adharma (Unrighteousness) if we continue to walk on the path by realising Dharma, then victory is ours, stated the National Guide Sadguru Charudatta Pingle of HJS in the online meeting of devout Hindus.

10th Hindu Rashtra Adhiveshan had been held in Goa in June 2022. HJS had organised an online meeting of office bearers of the Devout Hindu organisations from MP and Rajasthan who had participated in that Adhiveshan. Coordinator of these 2 States Mr Anand Jakhotia gave the information about the common activities program decided in the said Adhiveshan. Mr Pralhad Sharma of ‘Gayatri Shaktipeeth’, Mr Dharmendra Thakur of ‘Hindu Seva Parishad’, Mr Vinod Yadav, Founder of ‘Dharmarakshan’ organisation, Mr Shailendra Seth from Ujjain expressed their thoughts. 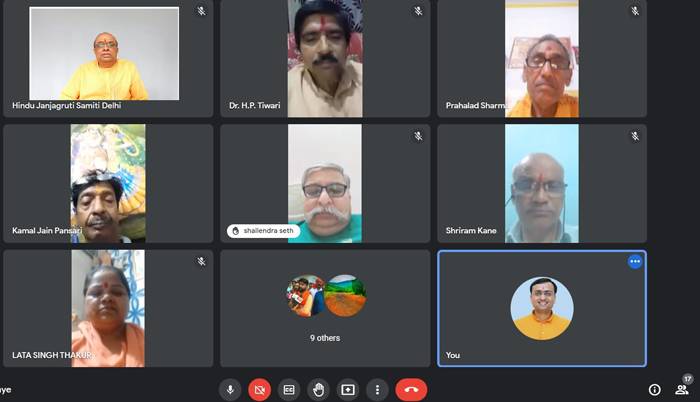 1. Dharmendra Thakur of Hindu Seva Parishad from Mandla said, “Everyone working for Hindutva should visit the Sanatan’s Ashram in Goa; because you can actually experience how Hindu Rashtra will function when established. We will definitely try to follow the common activities program decided in the Adhiveshan.”

2. Mr Vinod Yadav, Founder of ‘Dharmarakshan’ organisation from Bhopal, “Talking and listening about Hindutva has been done for a long time, now we must put in efforts to instill in every Hindu’s mind the thought of establishing Hindu Rashtra.”

3. Mr Pralhad Sharma of ‘Gayatri Shaktipeeth’ from Jaipur said, “After having attending the Rashtriya Adhiveshan we have been trying to convey the need of Hindu Rashtra in people’s mind.”

4. Mr Shailendra Seth from Ujjain said, “We learnt in the Adhiveshan in Goa that sadhana and removal of personality defects and ego are very essential for carrying the mission of Hindutva.  Mental capacity is sustained in adverse situation also due to doing sadhana, so also the unity in the mission of Hindutva will enhance due to less ego.