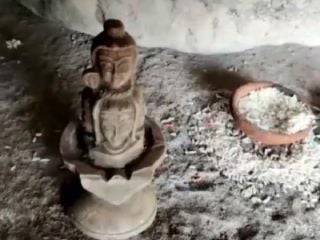 Chandrapur: A big news is coming out of the Chandrapur district of Maharashtra, in which a rare ‘Panchmukhi Shivling’ has been found in the excavation of a pond in Bhejgaon of the original taluka. This is the first case of getting Panchmukhi Shivling in the district. This Shivling is kept in the Hemadpanti temple on the banks of the Shilp pond. People say that a week ago an idol of Yamdev was also received from this pond. With the receipt of Panchmukhi Shivling, the importance of the history of Chandrapur has increased even more.

The work of excavation of ancient pond is going on in Bhejgaon of Chandrapur district. There is a Hemadpanthiya Shiva temple on the bank of this pond. The excavation work of this ancient pond is going on for the past few days. Due to excavation, Panchmukhi Shivling, considered very rare, has been found. This Shivling is made of terracotta and has red colour polish. The length of this Shivling is five inches. People say that such small idols are kept in the temple of the house for worship.