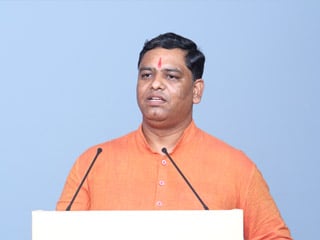 It is a historical, and legendary truth that the whole of Konkan, along with Goa, is the land of Bhagavan Parashuram. The land of Goa existed even before Christianity came into being. Even then, it is claimed that Goa is the land of Vasco and Xavier, and they are glorified. The same Xavier was responsible for ‘inquisition’ in Goa. There is only one important witness to the persecution in Goa through the inquisition, and that is the ‘Haat Kataro’ pillar. The same pillar was used for tying Hindus and cutting off their hands. This ‘Haat Kataro’ pillar located in old Goa is in totally dilapidated condition. Attempts are being made to hide this history through the Government and Archaeology Department. In many countries like Spain, Russia etc. the proofs of inquisition and relics have been preserved and kept in museums for people to see. The history of oppression by the Portuguese is, however, being covered up. Hindus are, nevertheless, waking up, and we will not rest till we expose before the world, the atrocities by the Portuguese against Hindus through ‘Inquisition’ and ‘Haat Kataro’ pillar i.e. ‘Inquisition Pillar’, stated Mr Ramesh Shinde, the national spokesperson of Hindu Janajagruti Samiti (HJS) in the special online program held by HJS on the topic of ‘Goa Files: Atrocities of the Inquisition’.

A video was shown during the program showing the nature of ‘Inquisition’. In this video, Mr Neeraj Atri, the President of ‘National Historical Research and Comparative Study Centre’ presented the atrocities against different peoples in the whole world; giving pictorial and historical references. An exhibition of pictorial flex-boards prepared by Chhatrapati Shivaji Maharaj Museum of Indian History, Pune, and published by HJS based on ‘the Inquisition’, was also shown online.

Francis Xavier, responsible for Hindus’ inquisition in Goa and who was leading in oppressing Hindus in Goa, is being portrayed as a Saint. The atrocities against Hindus kept under a cover are to be exposed to the people and to awaken patriotism amongst them, which is the aim of this program, stated Mr Jayesh Thali, the Secretary of ‘Gomantak Mandir Mahasangh’. Sanatan Sanstha’s national spokesperson Mr Chetan Rajhans said that St Xavier was being glorified to preserve the vote bank in Goa and attempts were made to create empathy amongst people towards the Portuguese. The history of the inhumane oppression carried out by the Portuguese is not taught in school textbooks. The Pope went to different countries seeking pardon for inquisition carried out in the different parts of the world, but he has not yet apologised to the Goans for their inquisition. All Hindu citizens from various parts of the country, including Goa, should demand that the Pope should apologise for the ‘Inquisition’ in Goa.