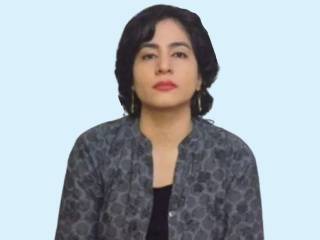 ‘The film ‘The Kashmir Files’ has created a big revolution in India. The truth which was hidden from the people from last 32 years has come to light, thereby causing awareness on a large scale. The people have turned their back on many of big-budget films released after this film. This made amply clear as to what the people wanted to see. Instead of digesting everything, they now find only truth worth digesting. Nothing else but the ‘truth’. This has been made amply clear from the tremendous response received by the film ‘The Kashmir Files’, stated clearly by Ms. Bhasha Sumbali, the famous actress who played the major role of victimised ‘Sharda Pandit’ in the film ‘The Kashmir Files’. She was speaking in a special online interaction titled ‘Support of Hindu community to The Kashmir Files’ : What are the thoughts of actors ?’ organised by Hindu Janajagruti Samiti.

Actress Bhasha Sumbali further said that the film is also raising awareness for ‘what happened in Kashmir should not happen elsewhere in India’. But the people who do not want the truth, the people who have committed genocide of Kashmiri Hindus, who want to hide this genocide, are the ones who are opposing this film. This is not the end of the issue as the film has created awareness across the country, but the Central Government should play a role in bringing justice to the Kashmiri Hindus.

On this occasion, actor and writer Mr. Yogesh Soman said, “Many films like ‘Haider’, ‘Mission Kashmir’, ‘Roja’ have been made on the subject of Kashmir before; however, instead of showing atrocities against Kashmiri Hindus, these films showed one sided scenes. From creating sympathy for the terrorists, it was shown how the Indian Army is committing atrocities in Kashmir. Therefore, those films did not go down well with the people. On the other hand, the film ‘The Kashmir Files’ has become popular due to its factual and objective information. If it is alleged that films like ‘Uri’ and ‘The Kashmir Files’ were made for spreading the Modi Government’s propaganda, then were the earlier films made for spreading the propaganda of the Congress and the then rulers ? Due to the influence of the film ‘Haider’, one of the actors later became involved in terrorist activities. If the task of imposing a particular ideology on people has been done before, then the other side must come before the people. The film has caused worries among left-wing, progressive, liberal people because the false history they have presented has been questioned. People are asking many questions on his book”.