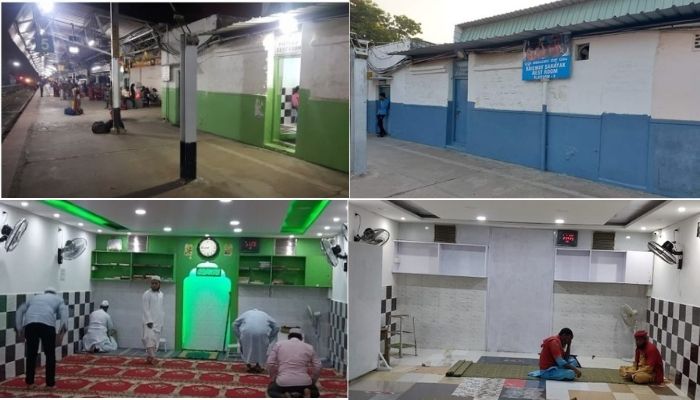 The illegal mosque inside the Krantiveera Sangoli Rayanna railway station on platform number five has been converted back to a porters’ restroom on 2nd February 2022. The action was taken after Hindu activists protested against the mosque and urged the South Western railways’ officials to take legal action against the unauthorized place of worship.

After a protest by Hindu Janajagruti Samiti members, South-Western railways officials have restored the mosque back to the porters’ restroom as it earlier was. According to a report published in Indian Express, an SWR officer has said “The restroom is the porter’s place and even today they are the ones who take care of it. We have never interfered in their restroom and they have never complained about their colleagues performing prayers. The issue will be solved in consultation.”

The South Western Railways (SWR) repainted the walls of the room on Tuesday and deployed personnel of the Railway Police Force (RPF) after locking it. The colour code used by the railways for the original construction was white and blue. The Muslims painted it green to underline the exclusivity as non-Muslim porters were not allowed to enter the porters’ restroom as it was converted to a mosque.

The mosque was not only converted back to the restroom but all the paraphernalia related to the mosque were also removed. The interior and exterior of this room are again painted blue as before.

A photo frame comprising of different religious symbols put together is also fixed on the wall to emphasize that this is a public place and does not belong to any particular religion.

Following a video claiming that the porters’ room located on Platform No. 5 at Krantiveera Sangolli Rayanna Railway Station has been converted into a place of worship for a minority community, activists of Hindu Janajagruti Samiti and Vishwa Hindu Parishad have submitted a memorandum to the Divisional Railway Manager of South Western Railway, seeking action on the “unauthorised” place of prayer and ensure that the premises is reserved only for the purpose which it was meant.

Yesterday Shri. Mohan Gowda, State Spoke person, Hindu Janajagruti Samiti, Karnataka submitted a memorandum to South Western Railway, Bengaluru Division. The memorandum states, “It is highly condemnable that the resting room of workers has been converted to a place of prayer by Muslims at platform no 5 at Krantiveer Sangolli Rayanna Railway Station. This is a very serious issue and a threat from the national security standpoint of view. Bengaluru KSR Railway Station is an important station of the state. Even though there are many masjids around the Railway station, giving permission for prayers on the platform seems to be a conspiracy. After making this a place of prayer, there are chances of demands to convert this place into a masjid.”

Porters Resting Room in Bangalore Railway Station has been converted to place of namaz !

Have the Railway authorities given permission for this ?

It further states, “Presently Bengaluru has been made a haven of terror activities. The National Investigating Authorities had arrested West Bengal based Adil Asadullah from the Bengaluru Cantonment station in 2018. In 2019 the NIA had arrested a terrorist, Mohamed Akram from the Majestic area in Bengaluru. The police had arrested a Bangladesh based terrorist of Jamaat Ul Mujahideen member, who was hiding in the Cottonpet Masjid in Bengaluru. In this background, how appropriate is it to allow a place of prayer on the platform in the Railway station?”

Considering this history of terrorists being caught in Bengaluru, HJS has demanded immediate action on those who have permitted the unauthorised place of prayer and that prayers should be prohibited in the resting room.

The @VHPDigital South Karnataka unit lodged complaint with the divisional manager South West Railways to restore the rights of porters and safety of the rail yatris.
The @RailMinIndia @AshwiniVaishnaw to please look into it. pic.twitter.com/45tXI0QQBu

The memorandum states, “We would like to bring to your kind notice that permitting any particular community to worship inside the Govt. building/premises is against the law.”

It further states, “We request to kindly intervene in the matter and stop such illegal activities with immediate effect and ensure that the premises is reserved only for the purpose which it was meant i.e. Rest room for porters. If such activity is not stopped within 15 days we may have to resort to strong agitation.”