Mumbai : The Mahim fort, recognized as the oldest fort in Mumbai, is under threat. The fort is under the jurisdiction of the State Archaeological Department, in name only! In fact, fanatics have encroached and captured the entire fort. While the government has announced that forts will be conserved and maintained, the religious fanatics have been busy colonising the Mahim fort. 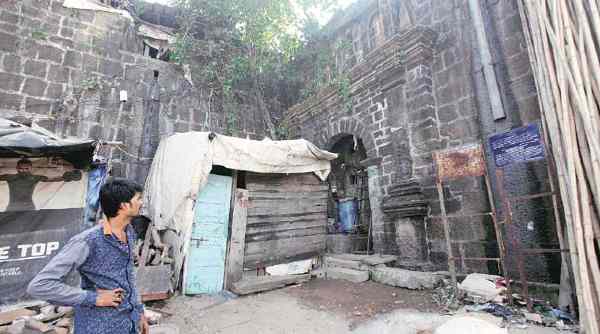 In ancient times, King Pratap Bimb built his empire on the shores of Mumbai. At that time he chose Mahikavati (now Mahim) as his capital. The area is named ‘Mahim’ after Mahikawati Devi. The fort of Mahim has a history of being built during the reign of King Pratap Bimb, around the 14th century. The fort has been declared a state protected monument. At present, the historical appearance of the fort has been destroyed and has become ‘home’ to many religious fanatics.

Similarly, fanatics have encroached upon many forts in the state of Maharashtra. Unfortunately the government and the archeology department are silent on the matter.

Inside Mahim Fort, there are nearly 500 tenements, each just 150 sqft in size but priced at Rs 8-10 lakh apiece. The houses get water supply only intermittently. A single mobile service provider’s network is available in the dingy homes. Still, it’s prime property, located as they are inside a historic fort even if one that has fallen on rough times.

But the residents living inside the fort, only a 15-minute walk from the Mahim railway station, couldn’t care less about the state of neglect the fort is in. In fact, the only thing that marks out the place as one of some historical importance is a placard on the north end of the fort placed by the Maharashtra government, stating that the fort is a protected structure under the Maharashtra Ancient Monuments and Archaeological Sites and Remains Act, 1960. The placard was put up nearly seven years ago when a wall on the western side adjoining the sea collapsed, local residents say.

As you inch closer to the fort, you are greeted by the sounds of a sewing machine. It is coming from a 150 sqft-tenement that operates as a tailoring unit on the “ground floor” of the fort. Fifty-year-old owner Shaikh Gaus has four sewing machines. Two boys are busy sewing a dress. Asked for directions to the fort, he says, “Yahi hai (This is Mahim fort).”

About the rampant encroachments inside, he points towards the other floors. “There are nearly 500 tenements inside the fort. This has been the state for the past 50 years,” says the Santacruz resident. “Before that, the fort was in a shambles. At least, people are using it now,” he adds.

The view from the fort today includes the Bandra-Worli Sea Link across the shoreline. Small fishing boats dot the waters on the Bandra side.

The fort has a glorious past though. Nearly eight centuries ago, the fort was built by local king Pratap Bimb and was an important war accessory, given its strategic location affording a view of the Arabian Sea.

In the 16th Century, the fort was the site of frequent skirmishes between the Portuguese and a Gujarati ruler before the island of Mahim was captured by the Portuguese and given as dowry to Charles II of England. After the English gained control of the fort, they strengthened it and turned it into a strategic watchtower against attacks.

According to some accounts, the fort had 100 soldiers and 30 cannons at that time. Now, the fort has DTH antennas jutting out and haphazardly placed bulbs. Inside the fort, there are lanes as narrow as 2-3 ft that one can access only by walking sideways.

Sultana Shaikh, who lives inside the fort like Gaus, says they have put their hard-earned money to buy the tenements. “How can they be illegal? People have been staying here for 50 years,” she says.

In fact, there is a committee that has approached everybody, from the Brihanmumbai Municipal Corporation (BMC) to the Customs department, seeking repairs to the collapsed wall on the west end of the fort. Since then, the lanes and bylanes have been flooded several times by sea water entering the fort. “The only thing the government did was put up a placard saying it was a protected structure and no damage should be done,” says Rizwan Shaikh, another resident.

An official from the archaeology department said the fort had been completely encroached now. “There is nothing historical about the fort apart from the outside fortification. The government is trying to clear the encroachments. It’s not our job to remove the encroachments and unless they are cleared, we can’t look at its conservation,” he said.

And this is exactly where the problem lies, according to conservation architect Abha Lambah.

“The situation at Mahim Fort has become a nightmare. There are multiple agencies involved. And all departments keep passing the buck,” she said.

“The state has to ensure there is a multi-pronged approach with all departments — BMC to the archaeology department and the Slum Rehabilitation Authority (SRA) — roped in. If the SRA scheme could be used for Dharavi, the same should be used here. Any other country would have preserved the fort well, considering the brilliant view it affords,” the architect said.