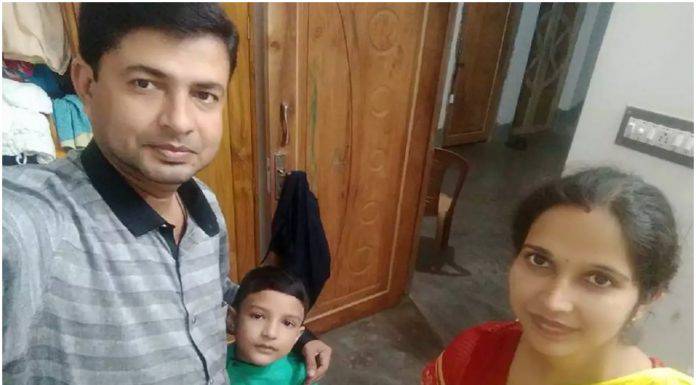 Reportedly, Bandhu Prakash was a school teacher who worked in Gosaigram Sahapara Primary School. He also worked as an insurance agent in the locality.

This beautiful family of a primary school teacher was brutally murdered yesterday along with an unborn baby by a jehadi mob in Murshidabad, Bengal. The deceased:
1. Prakash Pal
2. His pregnant wife
3. His 6 year old son pic.twitter.com/i1rIfUgbMv

According to the police officials, the Pal family was murdered by unidentified miscreants on Tuesday. As the family did not make it to the Durga puja pandal on Vijayadashami, the neighbours visited the Bondhu Prakash Pal’s residence, only to find that the door was locked from inside.

One of the neighbours informed the police after they heard loud sounds from Pal’s house. A neighbour has also informed that some people were seen rushing out of the house. Pal was last seen by his neighbours at around 11 am on Tuesday when he was returning from the local market.

The neighbours barged inside Pal’s residence and found the body of Bandhu Prakash and his son Angan on the floor while the body of the wife was lying in another room. A sharp weapon was reportedly found next to the bodies.

The police have stated that while Pal and his wife were killed with sharp weapons, their son Angan was strangulated with a towel.

Bandhu Prakash’s Facebook profile was reportedly full of videos of Durga Puja pandals and selfies of the family. He had uploaded his last post on the early morning hours of Sunday.

However, the police officials have yet to ascertain the reason for the brutal murder of the family. Their bodies have been sent for post-mortem. No arrests have been made yet. The family had moved to Jiyaganj almost six years ago. They lived in a single storied house at Kanaiganj-Lebutala

The police have begun their investigations and a case has been registered at Jiyaganj Police station.

Some sections of social media are indicating that the murder of RSS worker and his family have a communal angle to it as Murshidabad has been many such cases in the past, but no such angle has been reported in the case yet. The police have stated that an investigation is underway.