Nandurbar : Hindu Janajagruti Samiti (HJS) undertakes a drive every year for prevention of malpractices taking place in the background of ‘Holi’ festival and ‘Rang-panchami’. HJS submitted a representation demanding stringent action against those involved in malpractices; celebration of ‘Holi’ festival as per science and deployment of police patrolling squads during this period. The representation was handed over by HJS to Superintendent of Police (SP) Sanjay Patil, on 18th March. Shri. Kapil Chaudhari of ‘Swadeshi Jagaran Manch’ along with many HJS activists was present on the occasion. 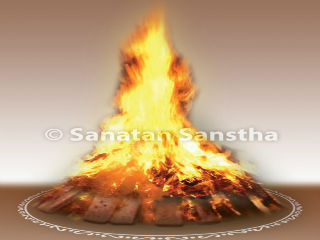 Sangli/ Kolhapur  : Representation was submitted by HJS to local district administrations and police at Sangli and Kolhapur, demanding curb over malpractices happening during ‘Holi’ festival and ‘Rang-panchami’, so also demanding provision for women’s security. Such representation was submitted to ‘Nayab Tehasildar’ Shri. Vijay Jamadar at Shahuwadi in Kolhapur district and to Shri. Shridhar Sawant, a staff member of police station. Devout Hindus viz. Shri. Sachin Chougule of ‘Shri Shivapratishthan Hindustan’, Shri. Ramesh Padval, Shri. Haibat Sone, along with activists of HJS and seekers of Sanatan Sanstha were present on the occasion. Representation was submitted to Tehasildar Shri. Gajanan Gurav at Shirol and Sou. Desai, police ‘Ammaldar’ at police station.