Ambikanagar : Sanatan has experience of investigating agencies implicating innocent Hindus who are working for protection of ‘Hindutva’. Millions of rupees were offered to many people for falsely linking Sanatan. Who are the persons providing money for implicating Sanatan; are they the ones who are looting temples’ funds or are they the atheists, whose corrupt practices were exposed by Sanatan ? Let them be anyone; but Bhagavan Shrikrushna has kept His hand over Sanatan Sanstha; bestowing blessings  and protected it from such conspiracies, stated Sadguru Nandkumar Jadhav, ‘Dharma-prasarak’ of Sanatan Sanstha while addressing ‘Hindu Rashtra-jagruti Sabha (sabha)’ held on 20thJanuary. Advocate Virendra Ichalkaranjikar, national President of ‘Hindu Vidhidnya Parishad (HVP)’, Shri. Sunil Ghanavat, State Coordinator of Hindu Janajagruti Samiti (HJS) for Maharashtra and Chhattisgad and Kum. Rageshree Deshpande of ‘Ranaragini’ Division also addressed the ‘sabha’ generating ‘Dharma-tej’ through their speeches. The ‘sabha’, which was held on the land of ‘samadhi’ of Navanath, was attended by 1100 Hindus wherein participants made a resolve to work for protection of Dharma through devotion as per the teachings of ‘Nath Sampradaya’. 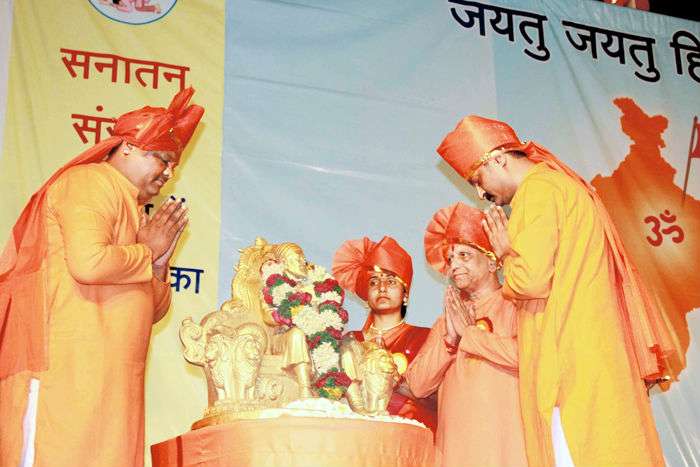